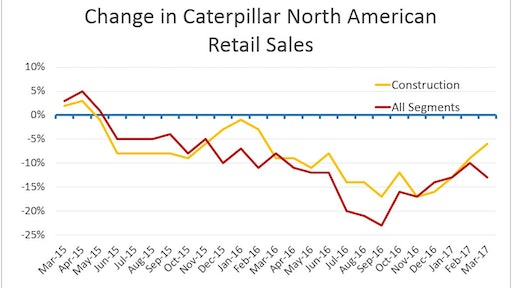 According to three-month rolling averages of dealer sales reported by Caterpillar, the company’s North American sales continue to struggle even as Asian sales lift total global sales to growth for the first time in more than 50 months. North American losses have been shrinking, though since fall 2016.
ForConstructionPros.com

Caterpillar’s North American sales continue to struggle, but losses have dwindling since fall 2016.

The company’s big recovery story has been in Asia, where sales began to grow mid last year, and turned remarkable 46% growth in March. Resource-Industry’s Asian sales contributed to the recovery, but Construction-Industries Asian sales leaped more than 50% in the past two months.

The company’s Construction Industries division showed 7% global sales growth based entirely on the Asian market’s recovery (Construction-Industries sales in all other regions continues to fall).