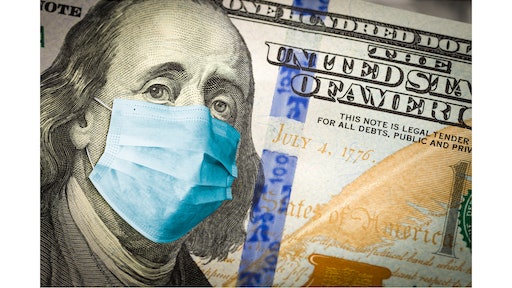 With the largest U.S. government relief packages ever already signed into law – $2.8 trillion mostly devoted to keeping businesses, hospitals and medical care afloat through the coronavirus pandemic – the question of transportation and infrastructure funding remains in play.

“Even though the global pandemic upended the congressional schedule as we know it, our committee has been pushing ahead with a surface transportation reauthorization bill and we hope to share more details in the coming weeks,” a spokeswoman for the House Transportation and Infrastructure Committee told Transport Topics.

For several weeks, Trump has argued that injecting up to $2 trillion into the infrastructure network would assist with economic recovery. While Congress has approved for the president nearly $3 trillion for emergency recovery efforts, neither Pelosi nor Senate Majority Leader Mitch McConnell (R-Ky.) have announced their intention to prioritize funding for infrastructure.

Senate Republicans are showing signs of being ready to put the country’s wallet away, now that the GOP’s biggest campaign donors have received trillions of dollars of stimulus.

TheHill.com reports the President Trump and Democrats are signaling support for at least one more round of checks to Americans. GOP senators, however, say they aren’t sold yet on the need for a second round, and several are strongly opposed to the idea.

“Well people in hell want ice water too,” said Sen. John Kennedy (R-La.), asked about another round of checks. “I mean, everybody has an idea and a bill, usually to spend more money. It’s like a Labor Day mattress sale around here.”

A spokesperson for Kennedy said the senator's comments were in reference to potential bills that would further increase state and local government funding, a topic that was discussed at length in the same interview with reporters.

May 8, 2020
Latest in Construction Grade