App of the Week: PlanGrid 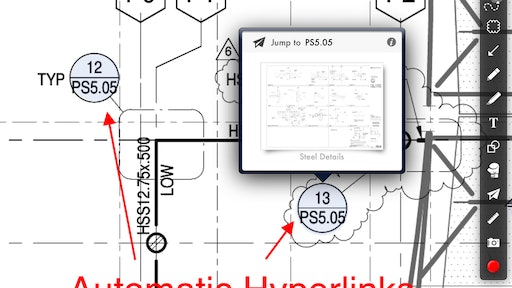 The automatic hyperlinking feature uses machine learning to figure out which plans uploaded to the app are related and create links between them.

The PlanGrid mobile app allows contractors and architects to collaborate and share project plans, specs and photos using the iPhone and iPad. The app was designed to help the construction industry move away from using printed paper plans. PlanGrid users can upload PDF drawings to plangrid.com and automatically sync to all team members in real time. Users can also share markups with everyone on the project.

First launched in March 2012, PlanGrid CEO Ryan Sutton-Gee says over 100,000 people have downloaded the app. The newest update was done on July 3, 2013, to version 3.1. The new version allows contractors to update a cloud-based rolling punchlist while on the jobsite even without Internet connectivity. The update also included an automatic hyperlinking feature which uses machine learning to figure out which plans uploaded to the app are related and create links between them.

The cost of the app is free, and users can upload up to 50 sheets for free. Once a user needs to upload more than 50 sheets they will need to pay a subscription fee which is based on a per month per person using the app basis.

Of the many features the app has to offer, Sutton-Gee says the most important are the ease of use and improved communication the app offers. Sutton-Gee says the app makes it fast and easy to view and distribute plans. Plus, PlanGrid uses only one master set of plans – hosted on the cloud – so everyone can view the same master plan as well as any changes or edits that are made to that master set. No longer will contractors or subcontractors have to worry about working off outdated plans. Finally, the ability to access these plans electronically empowers the field crew to communicate and participate and improve productivity, Sutton-Gee adds.

The three biggest benefits PlanGrid offers is paper costs savings, time savings and reduction in rework. According to a case study conducted by PlanGrid, users can achieve times savings up to 25% of the work week on average. Plus, contractors will save the money it would have cost to print paper plans. And since there’s only one set of master plans, PlanGrid makes it impossible to have old information available reducing the chance of building from outdated plans and creating rework, Sutton-Gee adds.

Have a nice hot lunch out on the jobsite with an electric lunch box.
Kimberly Hegeman
Dec 11th, 2020

Keep your tools right in reach with a tool holster that clips right to your belt.
Kimberly Hegeman
Dec 9th, 2020

Charge your portable devices on the jobsite without the mess of cables and cords.
Kimberly Hegeman
Dec 8th, 2020

Whether you need just a small tool box or an addition to your PACKOUT system, the Compact Tool Box can offer both.
Kimberly Hegeman
Dec 4th, 2020

Communication has become even more essential as 2020 required us all to social distance even at work.
Kimberly Hegeman
Dec 2nd, 2020

For some, coffee on the jobsite is a must, and the COFFEEBOXX makes that easier.
Kimberly Hegeman
Dec 1st, 2020

CONEXPO-CON/AGG 2020 is coming up in March and will offer many great opportunities for construction companies
Kimberly Hegeman
Dec 19th, 2019

This little device attaches to a drill and helps cool cans and bottles in less than a minute
Kimberly Hegeman
Dec 19th, 2019

If you're workers use hand tools on the job, consider giving them two-in-one tools that eliminates the space of additional tools and switching between tools.
Kimberly Hegeman
Dec 18th, 2019

Need to bring your lunch to the jobsite but want to make sure it stays cool? Get a cooler designed for the trades.
Kimberly Hegeman
Dec 17th, 2019

You carry your tools around your waist on a tool belt, why not do the same with your tablet and have it ready when you need it?
Kimberly Hegeman
Dec 12th, 2019

If your crews work in hot or cold environments and jobsites consider giving them new weather appropriate gear to keep them safe, comfortable and happy
Kimberly Hegeman
Dec 10th, 2019

Training is the gift that keeps on giving, and it's great for both new and seasoned construction employees.
Kimberly Hegeman
Dec 9th, 2019

Get a construction tool bag that is designed to be heavy-duty and withstand extreme worksites
Kimberly Hegeman
Dec 6th, 2019