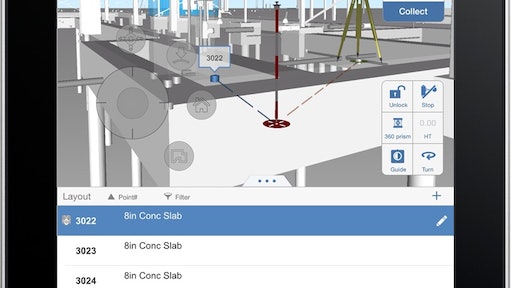 The BIM 360 Layout app features a first person immersive view of the building model as the user walks the jobsite to layout field points.

The Autodesk BIM 360 Layout mobile app connects Building Information Modeling (BIM) to the construction layout process using BIM 360 cloud service. The app and BIM 360 web service streamline the process of creating field points in a project model to laying out those points on the jobsite with a total station.

The BIM 360 Layout app features a first person-immersive view of the building model as the user walks the jobsite to layout field points. Users can then connect the field point creation process within the coordinated model to the actual layout process without manually preparing and exporting point lists.

Using a direct connection to a Topcon LN-100 Robotic Instrument via WiFi, the field user is guided to physical locations on the jobsite based on points created in the 3D model that are represented in the BIM 360 Layout app.