While the company has been manufacturing in the US for years, the new generation of JCB skid steers are the first machines designed specifically for North American users 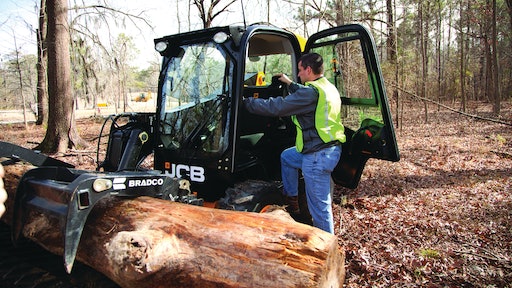 The single boom raising the bucket on JCB's skid steers allows a side-entry door that saves the operator the challenge of climbing over the work tool to enter and exit the machine.

Prior to JCB’s significant new product announcements in March, JCB products sold in the U.S. were designed for the U.K. and European markets with some modifications to make them acceptable in North America. However, JCB hosted its dealers from more than 32 countries on March 6 and 7 at its Savannah, Georgia, North America headquarters to unveil five new skid steer loader models and three new compact tracked loader models all designed specifically for the U.S. market.

The small-platform machine launch completes the company’s line-up of 17 models. The five small platform rubber-tired models range in rated capacity from 1,500 lbs. to 2,050 lbs. and the three tracked versions range from 1,350 lbs. to 2,050 lbs. The five large platform rubber-tired skid steers range in capacity from 2,250 lbs. to 3,300 lbs. and the four tracked versions also range from 2,250 lbs. to 3,200 lbs. There are separate models equipped with radial lift and vertical lift loader arm geometry to satisfy most application markets, and more than 30 JCB attachments round out the offering.

The company has operated the Savannah factory since 1999 and at various times built tractor loader backhoes and Loadall telescopic handlers as well as the high speed tractor loader backhoe that was designed and built specifically for the U.S. Army and NATO. The major design concession for the North American market was center-mount backhoe loader versus the side-shift mount most common in the U.K.

This new JCB skid steer product line is a complete break-away product from the British-centric mind-set. JCB management felt it best to design and manufacture skid steers and track loaders in Savannah where the market for these machines is centered -- in North America. JCB skid steers were designed in Savannah and are manufactured there with American sourced steel, weldments, parts, and components and with American labor.

The most unique feature on all the models of the new product line is the company’s single lift arm, dubbed the PowerBoom, mounted on the right side of the machine. It is similar in appearance to the lift arm arrangement used in JCB’s telescopic handler product line it calls Loadall. The single boom arm allows the company to put an entry door on the left side of the machine which eliminates the need for the operator to climb over the bucket or whatever attachment is hooked onto the working end of the machine. The JCB side entry also gives the operator much greater visibility around his machine because there is no left loader arm to block his view.

Anyone who has ever operated a skid steer knows visibility is an operator concern when working on a crowded site or in a tight space. With glass all around, the JCB cab can be equipped with factory installed air conditioning. The front window is used as an emergency exit.

As far as we know, this is the only skid steer/compact track loader machine on the market with a single lift arm and a side entry door. JCB claims it is the safest machine like this on the market, and it probably is. However, this unique feature also makes the machine controversial compared with others on the market. Standing back from the machine, it simply looks lop-sided and fragile. However, JCB is quick to point out the single arm has some 20% more steel in it than a twin-arm boom on competitive machines. The single arm saves on lift mechanism parts as well. There is only one hydraulic lift cylinder for example. It also allows the company to design the machine with a tilt-cab for easy servicing, a feature that is problematic on other brands. The electronic-over-hydraulic controls result in everything under that cab being accessible.

The machines at the meeting all performed well on several demonstration sites that were set up to emphasize the benefits of the side entry feature. For example, in an agricultural application, the JCB compact track loader was paced against a disguised conventional competitive machine moving a round bale through a hinged farm gate. The operator on “Brand-X” had to drop the bale, back up the machine, shut off the machine, climb out of the operator compartment by stepping over the fork attachment, open the gate, climb back into the machine over the fork, start the machine, reengage with the bale, etc. while in contrast the JCB operator was able to open the door, step out of the operator compartment, open the gate, step back in, etc. The contrast was very striking.

JCB management estimates that of the 60,000 skid steers sold worldwide, 65% are sold in North America. They estimate that in total, the market for these machines is a $4.5 billion annual sales opportunity of which $3.5 billion is sold in the U.S. The company estimates that 60% of the potential market is for its large platform machines and 40% is for its small platform machines. JCB has spent $40 million to gear up the Savannah plant to build 25 units per day of all models, or somewhere between 6,000 and 8,000 units per year. The company’s goal is to obtain 10% of the global market for skid steers and track loaders.

We didn’t realize what a global player JCB has become. The company builds products in Brazil, India and the U.S. as well as in the U.K. and Europe. Its overseas reputation may be better than in the U.S., despite the fact it has been in the U.S. for more than 40 years. The company claims it is the third largest equipment manufacturer in the world in terms of the quantity of machines built.

"Made in America" is a label that resonates, especially in today’s politically charged environment. In our opinion, JCB has a winner if it can overcome operator concern about the appearance of the single lift arm by advertising the safety aspects of the design and demonstrating the product to key users in each market, and expanding its national dealer network.