The Star Concept: How to Increase Crew Power 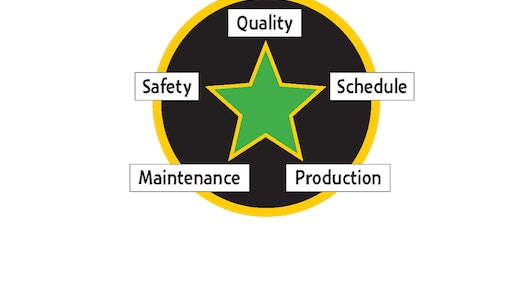 At a construction show I shared a strategy of engaging more crew workers to take greater responsibility in some area of their crew’s efforts. Called the Star Concept, it’s a simple strategy that I’ve coached construction crews on for years, helping them to implement and maintain it. Several attendees to my construction class encouraged me to share this through an article. So…it’s thanks to them that I’m writing this.

First of all, the Star Concept gets its name from a strategy I used several years ago, not only with my company but also with many other contractors over the years. It is a process of engaging more of your workers to participate on their crews. A number of reasons caused me to consider such a strategy.

All five reasons above still hold true for many contractors today. So now, let’s look at what the Star Concept is and how it functions.

There are several areas within each construction crew that are either directly or indirectly impacted by the workers. The five most visible areas, each represented by a point of the “Star,” are:

Again, each crew member impacts these five areas in some form or fashion. The one constant within any crew is the crew foreman. He is responsible for the positive results of all five areas yet cannot really be 100 percent focused on any one area for very long during the workday.

Because the crew foreman is only one person, it is important to get support and assistance from the crew members. Let’s face it: construction is more challenging today. With all the required safety, DOT, state and federal laws or guidelines that exist, the responsibilities of a crew foreman are simply broader than ever.

How the process works

To begin the Star Concept, select one or two of the five points of the star shared previously in this article. I often coach contractors to start with safety and maintenance. Next, you need to select a crew member to take on the role of a “coordinator” for each area.

Let’s look at the role of “maintenance coordinator.” I would begin by selecting a crew member who has demonstrated a bit more attention to making sure that a tool is in working order or that one of the pieces of equipment has enough oil. Or it might be the employee who has a bit more mechanical skills or interests.

After you select your maintenance coordinator (MC), you’ll then need to educate him on what he will do in the role. Consider a general overview of this role that you might use:

The maintenance coordinator can assist his crew by assessing the condition of tools and equipment needed by the crew. If something is not in working order or needs maintenance, the MC informs the crew foreman of the need. The MC is not responsible to fix or maintain the crew’s tools or equipment but initially serves as an extension of the crew foreman to see that the tools and equipment are in working order for the crew.

A more detailed maintenance coordinator description is needed.  Such a description should answer the questions highlighted in the sample below.

The Star Concept works! It brings more workers into participating with the well being and performance of the same crew of which they are a member. When more workers participate in something like the Star Concept, there is a healthier work culture. More workers feel more needed and thus more important.

Using the maintenance coordinator as an example, you can follow the same process to add to your crew’s “star points.” If your crew size is in the five to 12 member range, then fielding a coordinator in all five of the suggested areas might be possible. If your crew size is more like the three to seven-member size, then perhaps only two or three “star points” might be considered.

Keep a few final thoughts in mind about incorporating the Star Concept into your crew strategy for greater crew safety, performance and motivation:

Integrate the Star Concept into your crews this year. You may be surprised at the support and enthusiasm of your workers after they get a real feel for the benefits of having another point person for one or more areas of crew work.

If you have any questions about the Star Concept, either before considering its use in your company or even after you’ve installed it, please write me via our blog. As they say, “Shoot for the Stars” and you just might find your crew’s productivity, enthusiasm and attitude about work moving skyward!