How to reduce risk of extension cord-generated fire, electrical shock and property damage. 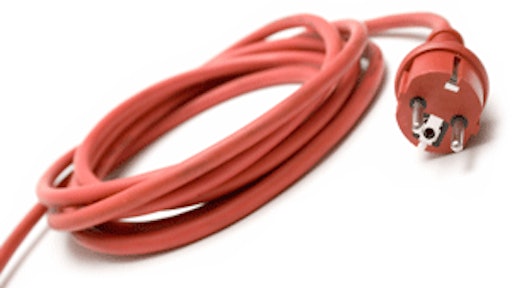 When in need of an extension cord in the office or at home, it's imperative to know that just because a particular cord is long enough, it's not necessarily the right one for the job. Many erroneously believe length is the only characteristic that sets one extension cord apart from another, but there's far more that should be considered.

Power extension cords are not created equal, but rather are manufactured for use in specific applications and environments, and to carry varying amounts of electrical current. By basing the extension cord choice on each task's specific requirements, you can greatly reduce the risks of fire, electrical shock, and injury that come with improper use.

Classifications -- Extension cords are classified for either indoor or outdoor use. The insulation, or jacket, of an outdoor-rated extension cord is made of a tougher material, which is designed to withstand temperature changes, moisture, UV rays, and (sometimes) chemicals. While it's fine to use an outdoor power cord indoors, never use an indoor-rated extension cord for an outside job ... doing so could cause electric shock or create a fire hazard.

Powering Multiple Devices -- If you plan to plug more than one device into a given extension cord, calculate their combined energy requirements and make sure that the total isn't higher than the wattage rating for that cord. Never use an extension cord to supply more wattage than it's rated for, since overheating and fire may occur.

Gauge and Distance -- Any electrical cord, extension or otherwise, contains an inner metal conducting wire, which carries electrical current from one end to the other. The thickness of this conductor is referred to as its gauge. Gauge is indicated by a number; the lower the number, the thicker the wire is. A wire's thickness directly affects the amount of current (or wattage) it can carry over a certain distance.

Power Requirements -- It's important to know how much electricity is required to run a given device before you plug in. For the most part, you won't need to do more than consult the manufacturer's instructions. Another good place to look for wattage specs is on the tag often attached to a device's power cord. And if all else fails, a quick call to the product's manufacturer should clear up any questions.

Amps/Volts vs. Watts -- In some cases, you may find power requirements listed in amps and volts instead of watts. For these situations, there's a simple formula that can help you calculate electricity requirements: just multiply the number of amps by the number of volts -- the resulting number equals that appliance's wattage. Here's an example: if a device uses 5 amps at 110 volts, that translates into 550W (5 x 110 = 550).

UL Approval -- When shopping for extension cords, only purchase those that bear the UL symbol. The presence of the UL mark tells you that samples of that particular type of cord have been tested by Underwriters Laboratories and received consumer safety approval.

Red Flags -- Don't use extension cords with cut or damaged insulation ... exposed conducting wires can put you at risk for fire, burns and electrical shock.

Alterations -- Do not cut, file, or otherwise alter an extension cord's grounding pin or plug blades to make it easier to plug into an outlet! If the extension cord plug doesn't fit into an older outlet, have an electrician replace the receptacle.

Unplugging -- Regardless of whether or not it's being used, as long as a power extension cord is plugged into an outlet, it's conducting electricity. To avoid potential safety hazards, always remember to unplug extension cords when they’re not in use!

Childproofing -- If your electrical extension cord can accommodate multiple plugs but not all receptacles are being used, block unused openings with outlet covers to prevent injury to children and pets.

Storage -- Extended exposure to outdoor conditions can cause cords to deteriorate, so whether they're rated for indoors or outdoors, store all extension cords inside when they're not in use.

Are You Training Your Construction Employees on Jobsite Electrical Safety?