Are You Training Your Construction Employees on Jobsite Electrical Safety?

While electrical-related workplace fatalities have declined, construction still remains the most at-risk industry 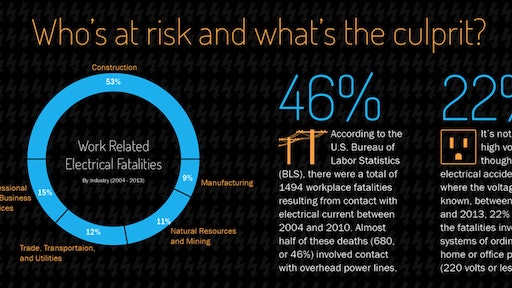 The construction industry remains the most at risk for work-related electrical fatalities and non-fatalities.

According to a recent electrical safety injury infograpic from Graphic Products, from 1992 to 1996 an average of 327 U.S. workers died from electrical accidents. That number has dropped 50% with the average deaths due to electrical incidents from 2009 through 2013 dropping to 161.

[VIDEO] How to Avoid Electrical Hazards on the Construction Jobsite

In 2015, general electrical safety was the 10th most cited OSHA safety violation.

According to OSHA, the most frequent causes of electrical accidents include:

The National Institute of Occupational Safety and Health (NIOSH) adds to that list:

What's in your safety program?

Electrical safety on the construction jobsite is twofold. First, is training. Second, and maybe more importantly, is ensuring employees are following their training and procedures. What good is preaching safety if your workers are ignoring it on the jobsite?

A NIOSH study of workplace electrocutions from 1982 to 1994 covered 224 incidents that resulted in 244 worker fatalities. Nearly 35% of those incidents (79 incidents) reported that no safety program or written safe work procedures were in place. According to the study, 39 of the victims had no safety training.

Whether or not your construction employees are often at risk, employees should be trained on electrical and arc flash safety. In a survey of arc flash injury victims, 94% believed the incident could have been prevented.

We are surrounded by electricity, and we often forget how powerful it is. Make sure your employees are trained to identify electrical hazards on the construction jobsite and how to safely protect themselves from electrical accidents.

Video: How to Avoid Electrical Hazards on the Construction Jobsite