IAPA Winners Celebrate in Windsor; 2015 Event to Be Held in Washington, DC

Close to 500 people from 28 countries attended the International Awards for Powered Access (IAPAs) on April 3 in Windsor, UK, which saw 14 winners recognized for best practice, excellence and innovation in the industry. 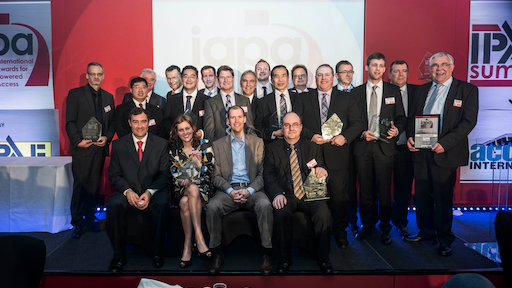 More than 470 people from 28 countries attended the International Awards for Powered Access (IAPAs) on April 3, 2014 in Windsor, UK, which saw 14 winners recognized for best practice, excellence and innovation in the industry.

The IAPAs took place on the same day as the IPAF Summit, where the audience of more than 200 was kept engaged through the panel of top-class speakers who delivered excellent presentations and scope for discussion.

During his closing speech, Tim Whiteman, IPAF CEO, revealed that the next IPAF Summit and IAPAs will be held on March 26, 2015 in Washington, DC, USA.

IPAF Training Instructor of the Year

The judges said: “Tony Radke is an outstanding champion of IPAF, with great achievements in the US market.”

The judges said: “With 40 years of traveling the world, Mr Hollstegge has transitioned easily to IPAF training and works with a technically difficult product, sometimes without the use of computers.”

The judges said: “We are impressed by the rate of growth and how Mills has taken the IPAF philosophy and driven it through the business.”

The judges said: “Mr Koniecko has captured the exhilarating atmosphere at the Palace of Culture and Science during the Grand Finale, a day-long fundraising event in Poland for national children’s charity, the GOCC.”

Power Towers, UK, for the Peco

The judges said: “This is really new, reliable and eco-friendly; a standout piece of equipment.”

Scanclimber, Finland, for the Double Decker

The judges said: “A unique time saving product. The Double Decker platform is very flexible, meaning it has a wide operation range.”

Product of the Year – Vehicle/Trailer Mounted

The judges said: “Outstanding features, including up-and-over reach. It can be fitted on a 4-axle chassis which reduces cost.”

The judges said: “The biggest self-propelled boom in the world (at the time of the judges’ meeting) has taken the product sector a step further into the area of truck mounts.”

The judges said: “A bright, energetic company doing things differently. Excellent customer focus through setting benchmarks and then building the whole company around that.”

The judges said: “Mr Douglas has shown an outstanding personal commitment to safe working at height on behalf of his company, including the promotion of IPAF’s accident reporting project.”

The judges said: “A unique example of developing and educating a market and focusing on safety. The company has also been instrumental in getting access equipment into other parts of South East Asia.”

The judges said: “Building a new safe confinement over a damaged nuclear reactor at Chernobyl, Ukraine, Fraco created a solution to take loads of 5.5 tonnes up to 30 m without anchor or fixings to the structure. This was a very difficult job in an extremely dangerous environment.”

The judges said: “Apart from forging an impressive career in access, Mike Evans has made a significant difference to this industry and gained the trust of those who have worked with him.”

There was an outstanding response to the IAPAs 2014, with more than 100 entries across 13 award categories, including a great number of very strong entries among these. The judges thank all who took part and encourage them to enter again for the awards in 2015.

More event details are at www.iapa-summit.info

Getting through a hot day takes planning and preparation; don't show up to the jobsite unprepared for the heat
July 11, 2017

AGC has put safeguards in place so you can register for this in-person, physical event covering key construction safety, COVID-19 preparedness and environmental issues
Associated General Contractors of America
May 11, 2020