Construction Recovery May be Two Years Away 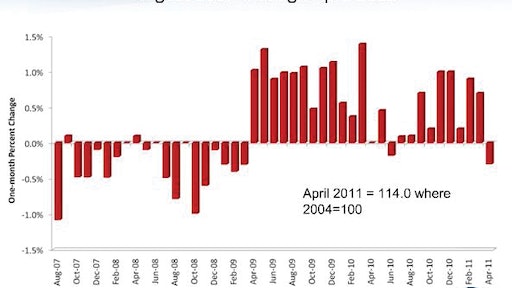 "You can see here that the economy has hit a soft patch and I expect this soft patch will last through the summer," said Associated Builders and Contractors Chief Economist Anirban Basu. "And as a result, I would expect the construction recovery to stall as well."

The same reasons that most Americans believe our anemic economy is still in recession have locked the construction industry in a desperate spot, according to economists gathered for the Associated Builders and Constructors' inaugural Mid-Year Construction Forecast. Their outlook for the remainder of 2011 offers scant encouragement.

"Unfortunately, this does not mean that all portions of the economy are out of recession. And it does not suggest that the economy itself is booming," said ABC's chief economist, Anirban Basu. "The last data point we have for GDP is 1.8% growth for the first quarter of 2011 and economists during the entirety of the second quarter have been racing to downgrade their forecasts for the quarter and for the balance of the year."

Scarcity of jobs and a still-receding housing market are one/two punches keeping the economy on the ropes. And while our wan recovery has created some jobs, in the best of recent months the U.S. has scarcely produced the 150,000 job openings necessary to employ new monthly entrants to the marketplace (on average the economy has generated 72,500 new jobs per month over the past year). The U.S. remains 7 million jobs below its peak in December 2007.

The unemployed, underemployed and those worried about job security don't buy houses, no matter how affordable they become.

House prices depressed by the unrelenting tide of foreclosed properties dumped by banks on the market have become a liability. Homeowners can't afford to trade up because they can't get decent prices for their existing houses. Housing has forsaken its traditional role in providing the economic activity to lead the country out of recession.

"We tend to see residential recovery of around 20% in the first two years of an economic recovery," said Kermit Baker, chief economist with the American Institute of Architects. "With house prices as weak as they have been – somewhere between 30% and 35% off of their peak and still declining in many markets across the country – buyers have been very nervous about getting back in the market."

Last year's lull in foreclosures while bankers got their paperwork in order is over, and the renewed flood of distressed home sales pushed home prices down again in April. It was one of a series of shocks to the struggling economy.

"We may be at or nearing another inflection point – a period of economic softening," says Baker. "I think the clearest evidence of this was the May jobs report we just got (the economy added only 54,000 jobs for the month). Hopefully this is not another summer swoon (like the one brought on by Greece's economic meltdown in June of 2010), but this cycle is unfolding in fits and starts and it does appear that it is going to continue to do that."

"We're in for a relatively slow recovery this year with a 30% to 35% improvement in multifamily starts, but with single-family starts going backward," said National Association of Home Builders' Chief Economist David Crowe. Assuming increasing employment, he forecasts 600,000 single family starts in 2012. "Multifamily won't pick up so much in 2012, as many projects are to be started in 2011."

"From what we’ve seen so far in 2011, nonresidential construction will likely be further delayed," he said. "I do not expect significant construction employment in the months ahead. The economy has hit a soft spot and the construction job picture is flat.

"There are a number of nonresidential segments that should show signs of life by next year," Basu added. "Construction related to energy and healthcare top the list, but there is also a significant amount of construction to be generated by data centers, exporters and in rebuilding communities shattered by natural disaster."

Basu points out that while there is a dearth of residential buyers, "significant pools of money have formed to purchase distressed commercial real estate.

"We're talking years before we see unemployment rates approaching 6%," Baker said. He estimated 2015, and then considered what single factor could hasten the economy toward more normal levels. "No. 1 on the wish list would be consumer confidence – people are nervous about doing anything at all now."

"What we need is the Dow at 16,000," he said. "Then more of these baby boomers will feel comfortable retiring, which will create a lot of job opportunities."

Watch a recorded version of the ABC 2011 Mid-Year Construction Forecast.