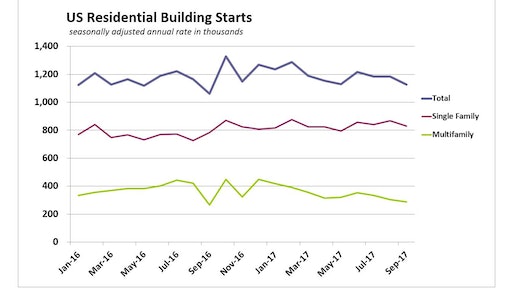 Total U.S. housing starts in September fell by 4.7% -- much steeper than the 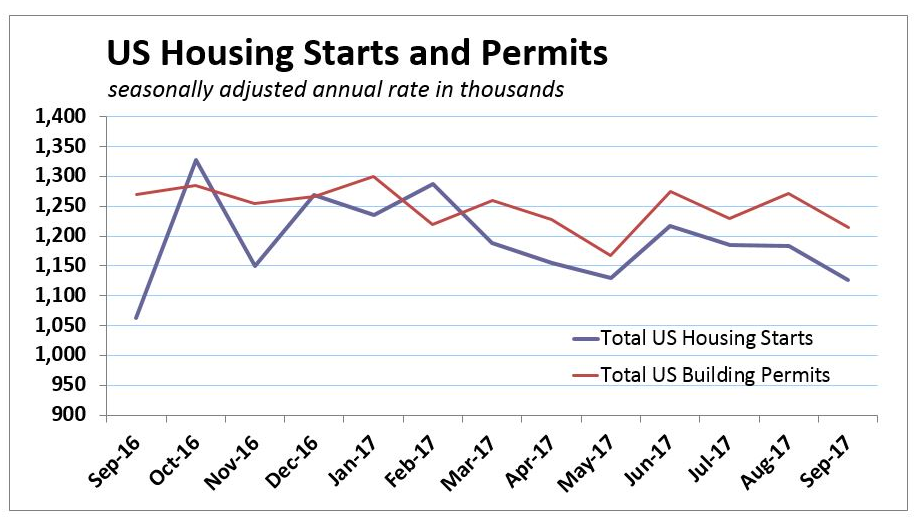 August starts were revised slightly higher, taking some of the sting out September’s drop.

Permits fell 4.5% in September but remain nearly 8% above starts, setting the stage for a rebound.

September’s drop in starts underscores the importance of Florida and Houston. Total starts also fell in the Midwest and Northeast. The drop was entirely in apartments as single-family starts were up.

Single-family starts plunged 15.3% in the South, but year-to-date the South is

7.5% ahead of its pace over the same period in 2016. Single-family starts in the other three regions of the country recorded increases for the month, adding to significant year-to-date growth.

Multifamily starts declined by 5.1% over the month of September to 298,000 units, with steep declines in the Midwest and Northeast. Surprising growth in the South, and a big jump in the West didn’t change the steady decline of multifamily construction year to date.

Year to date, U.S. multifamily starts are 9.2% below their level over the first 9 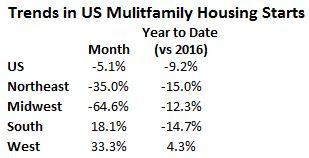 months of 2016. The pace is slowing across three of the four regions of the country, with only the West building starting more multifamily construction than in 2016. After increasing 11.8% in 2015 relative to 2014, multifamily starts recorded its first post-recession decline, of 1.3%, in 2016.

While repairs on damaged homes are not counted as starts, they may impact starts by worsening labor shortages and driving materials prices higher. Some projects may simply be delayed. 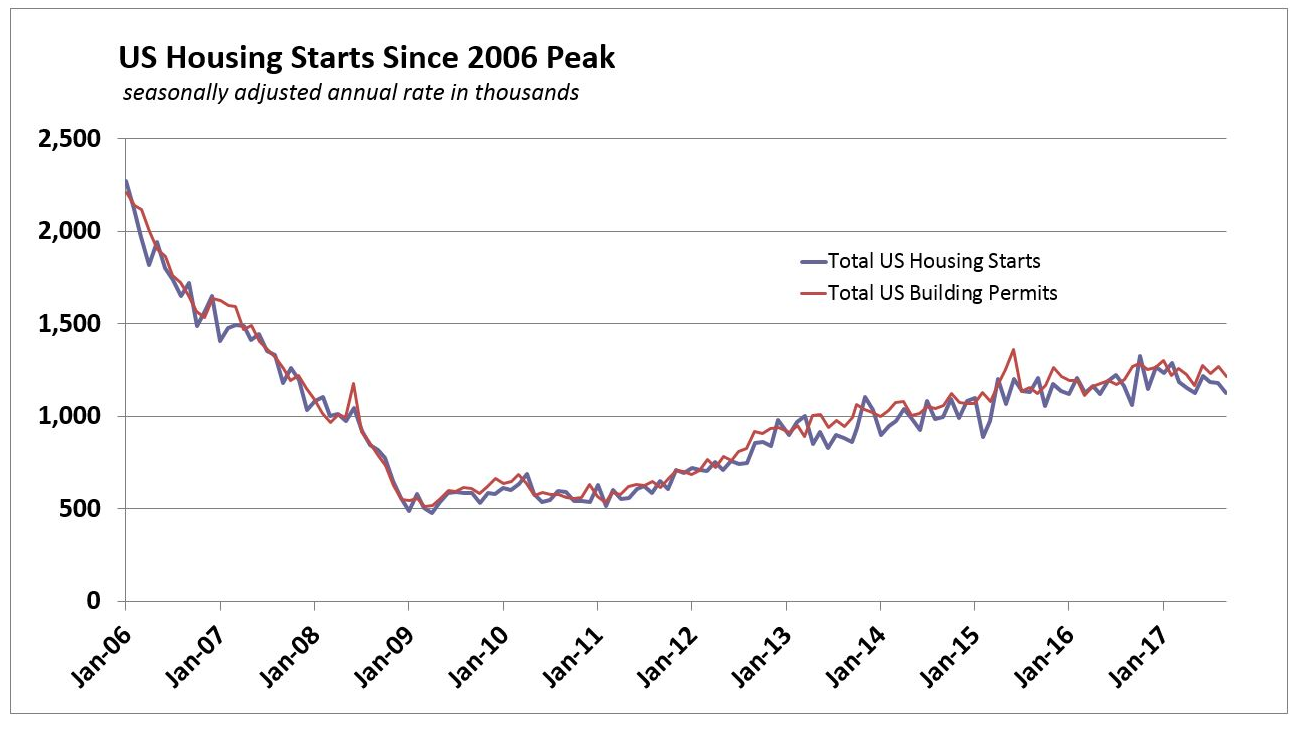 It's more important now than ever before to have the best equipment in your fleet to stay competitive. These Top 30 Products represent both the tried and true and the new and improved.
Jessica Lombardo
May 6th, 2021

In a conversation with Punchbowl News sponsored by the Association of Equipment Manufacturers, Pete Buttigieg said Congress will be very busy in the coming days working on the American Jobs Plan
Jessica Lombardo
May 4th, 2021

Takeuchi-US has presented Parman Tractor & Equipment of Nashville, Tenn., with an award for having the largest market share growth of all Takeuchi dealers in North America during 2020.
Takeuchi-US
May 5th, 2021

If you’re unable to stop criminals from getting onto your jobsite, the next best thing you can do is put roadblocks in place to slow them down in the act.
Pro-Vigil
May 4th, 2021

COVID-19 may have accelerated the move to cashless payment however, it is much easier and less fees associated with accepting plastic payment for jobs than ever before.
Nick Howell
May 4th, 2021

“The U.S. economy expanded rapidly during the first quarter of 2021, but investment in nonresidential structures actually subtracted from growth,” per ABC Chief Economist Anirban Basu.
Associated Builders and Contractors Inc. (ABC)
May 3rd, 2021

It's important to be vigilant about safe practices on the job. Here's seven site hazards that construction crews often overlook.
Caterpillar - Cat
May 3rd, 2021

Most construction owners are optimistic about the strength of the upcoming peak season and their business’s ability to get back on track, the study says.
Gigi Wood
Apr 29th, 2021
Follow Us