September ABI score was 49.1, down from a score of 53.7 in the previous month, reflecting a slight decrease in design services 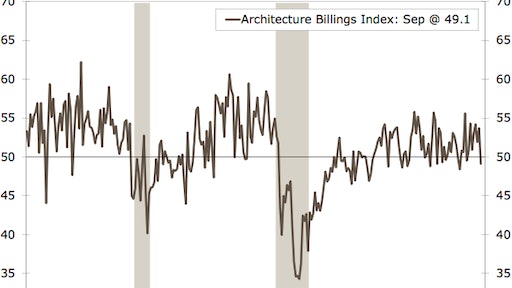 A 4.6 point drop in the September Architecture Billings Index breaks seven consecutive months where the index was above 50.
Wells Fargo Securities

After seven months of steady growth in the  demand for design services, the Architecture Billings Index (ABI) paused in September.  The American Institute of Architects (AIA) reported the September ABI score was 49.1, down from a score of 53.7 in the previous month. This score reflects a slight decrease in design services provided by U.S. architecture firms (any score above 50 indicates an increase in billings). 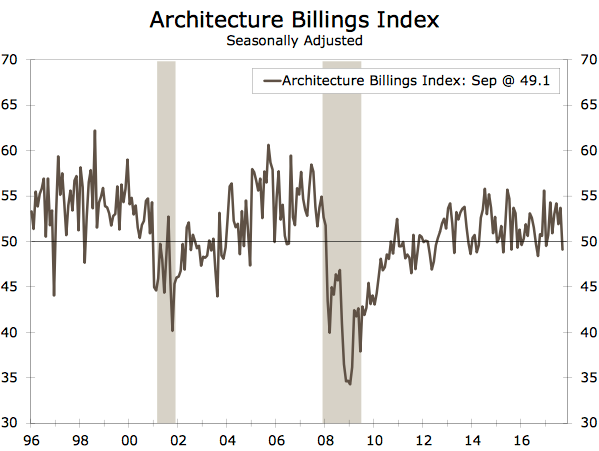 A 4.6 point drop in the September Architecture Billings Index breaks seven consecutive months where the index was above 50.Wells Fargo Securities

As a leading economic indicator of construction activity, the ABI reflects the approximate nine to 12 month lead time between architecture billings and construction spending. The new projects inquiry index was 59.0, down from a reading of 62.5 the previous month, while the new design contracts index eased somewhat from 54.2 to 52.9.

“We’ve seen unexpectedly strong numbers in design activity for most of 2017, so the pause in September should be viewed in that context” said AIA Chief Economist, Kermit Baker, Hon. AIA, PhD. “Project inquiries and new design contracts remain healthy, and the continued strength in most sectors and regions indicates stability industry-wide.” 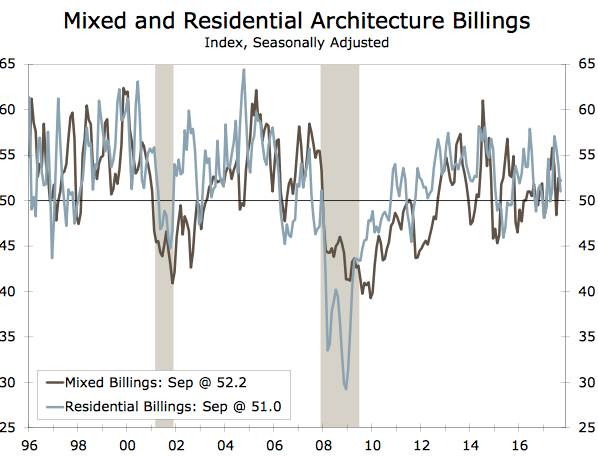 Regionally, the Northeast was the only region to experience a gain on its ABI. The Northeast came in at 56.9 in September, more than two points higher than its 54.3 reading last month. The South, Midwest and West all experienced drops in their ABI scores. In September, the South registered at 54.0, a slight drop from 55.7 in August. The Midwest was at 50.4 , a two-point drop from August's 52.5 reading. The West registered a 2.5 point drop from August's 51.3 to September's 48.8 reading. 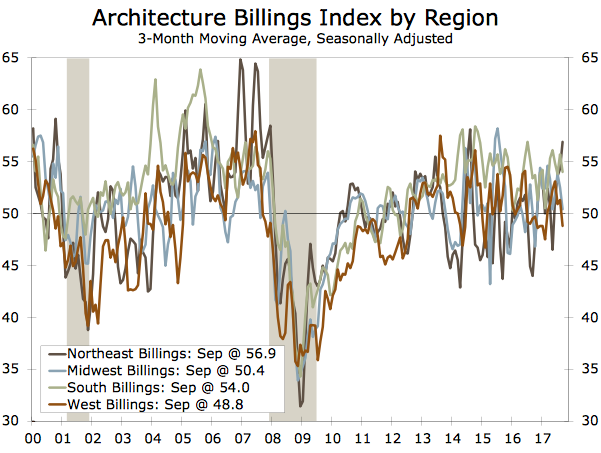 The West was the only region to report a score below 50.Wells Fargo Securities

In the sector breakdown, only institutional saw an increase in it's ABI score from 50.1 in August to 51.0 in September. The commercial/industrial had the biggest drop in its ABI score dropping 3.6 points from 57.6 to 54.0 in September. Multifamily residential dropped 2.8 points from 53.8 to 51.0 while the mixed practice sector decreased slightly from 52.5 to 52.2. 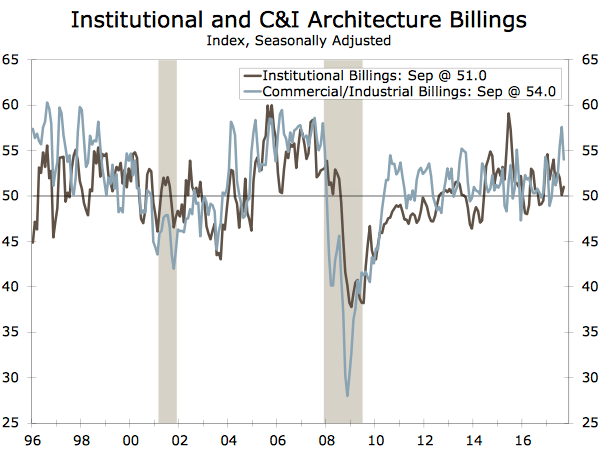 Institutional billings were the only sector to see an increase in ABI score in September.Wells Fargo Securities