Construction Unemployment Rate Edges Down to 13.3% 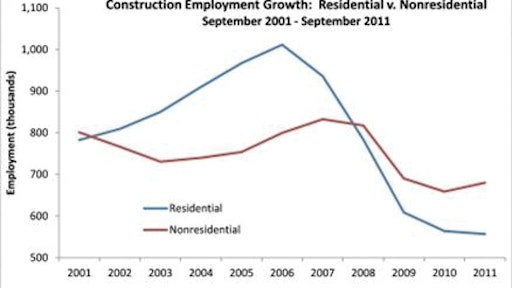 Across all industries, the nation added 103,000 jobs as the private sector added 137,000 jobs and government lost 34,000 jobs. However, 45,000 of the jobs added were the result of rehiring striking telecommunication workers. Year over year, the nation has added 1,490,000 jobs, or 1.1%. However, the nation's unemployment rate remained at 9.1% in September.

"Today's construction employment report offers hope that the industry is experiencing a positive trend in activity," said Associated Builders and Contractors Chief Economist Anirban Basu. "Though there is much concern regarding the direction of construction spending as we approach 2012, for now activities remain stable. In fact, the most recently available data has been decidedly positive, indicating rising construction spending and job growth.

"In September, the U.S. nonresidential building industry added more jobs than it has since January 2007," Basu said. "This fits neatly with what ABC's Construction Backlog Indicator (CBI) has been predicting through the second quarter of 2011—that relatively robust growth in backlog, foreshadowing the current period of spending and employment, improves the industry.

"If the economic momentum that existed in early 2011 had persisted, the outlook for construction spending and employment would still be positive," said Basu. "However, much of that pre-existing momentum has been lost during the past seven months, with the implication being that the current pace of recovery in nonresidential construction is unlikely to last.

"Given little hope for significant stimulus in the near term, the expectation is that the pace of increased employment in the nonresidential construction industry will eventually begin to wane during the months ahead. If the economy continues to deteriorate, the growth trend will be reversed," Basu said.

Construction Unemployment Rises To 13.7% in October