Construction Unemployment Rises To 13.7% in October

Construction industry lost 20,000 jobs for the month, but news for the overall economy was "hardly terrible" 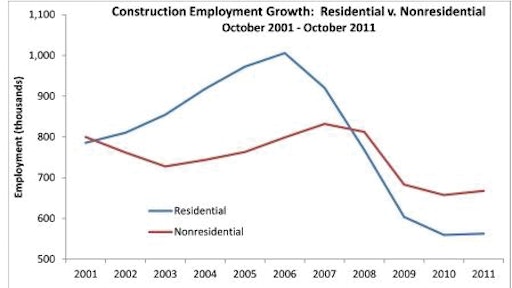 Nonresidential construction employment decreased by 4,500 jobs for the month with employment standing at 667,900 jobs. However, the sector added 10,300 jobs or an increase of 1.6% from October 2010 levels.

The heavy and civil engineering sector added 3,700 jobs in October and has added 6,000 jobs or 0.7% from the same time last year. In contrast, the specialty trade contractor sector lost 22,100 jobs for the month and has lost 6,400 jobs, or 0.2%, year-over-year. Within that sector, nonresidential specialty trade contractor employment dropped by 22,500 jobs from September and lost 20,700 jobs, or 1% compared to October 2010.

Residential building construction employment gained 3,300 jobs for the month and has added 3,100 jobs, or 0.6%, over the last twelve months.

"Though the addition of 80,000 jobs in October fell short of consensus expectations, the news for the overall economy was hardly terrible," said Associated Builders and Contractors Chief Economist Anirban Basu. "Unfortunately, the good news does not encompass the construction industry.

"Due largely to the chilling effects of the soft-patch that emerged in the nation's economy in March upon the confidence of lenders and developers, many construction projects that were set to break ground have been put on hold," Basu said. "This has translated into weaker activity in many construction segments including architectural services and specialty trade contractors.

"One of the implications of this has been a sharp reduction in hiring in a segment that has been adding jobs recently, as witnessed in today's report," said Basu.

"No private industry lost as many jobs as construction," said Basu. "Construction activity is likely to remain soft in the months ahead for a variety of reasons, including stretched state and local government capital budgets, the winding down of federal stimulus, and still disciplined lending."

Construction Unemployment Rate Edges Down to 13.3%