'One month does not make a trend and other data remain upbeat, including consumer activity and overall economic momentum. Economists will look for signs of labor-market improvement in April' 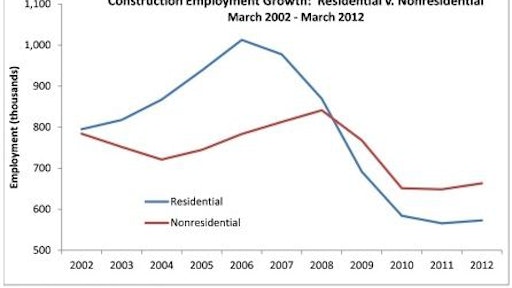 Construction industry unemployment is down compared to the March 2011 rate of 20%.

"Today's employment report was disappointing, particularly for construction," said Associated Builders and Contractors (ABC) Chief Economist Anirban Basu. "The first quarter of 2012 will be judged as a step backward for the industry as construction spending levels stagnated and employment momentum disappeared.

"A certain level of weakness was anticipated due to the economic slowdown during the spring and summer of last year that caused many projects to be put on hold and resulted in diminished construction momentum," Basu said. "In addition, ABC's Construction Backlog Indicator, a predictor of construction activity, dipped during last year's fourth quarter, setting the stage for the declines in construction employment now being observed.

"This employment report differed from the prior three months because employment growth was disappointing for the broader economy as well," Basu said. "The consensus coming into today's release was the nation would have added approximately 200,000 jobs in March, which did not happen.

"Some attribute the disappointing March report to abnormally warm weather across the nation, which caused February's employment to be artificially high. However, one month does not make a trend and other data remain upbeat, including consumer activity and overall economic momentum. Economists and others will be looking for signs of improvement in labor market dynamics in April," Basu said.