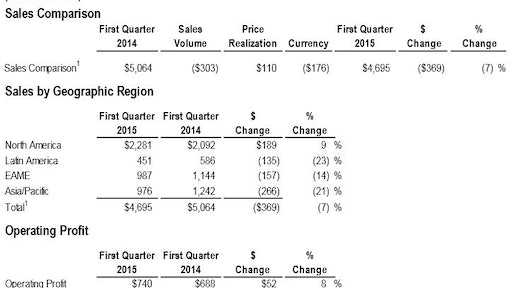 “We delivered solid results for the first quarter of this year, including higher profit than in the first quarter of 2014. Our focus on operational improvement, including lean manufacturing and cost management, is helping in what is a tough time for some of our important cyclical businesses. We continue to execute on improving safety, quality, inventory turns, delivery performance and market position,” said Caterpillar Chairman and Chief Executive Officer Doug Oberhelman.

“The first quarter wasn’t without challenges. Sales and revenues were off about 4% percent from the first quarter of last year, mining remained weak and construction was down in most regions.  On the plus side, Energy & Transportation turned in another great quarter, although we don’t expect this to continue due to the oil-related portion of the business,” added Oberhelman.

Construction Industries’ sales were $4.695 billion in the first quarter of 2015, a decrease of $369 million, or 7%, from the first quarter of 2014. The decrease in sales was due to lower volume in all regions except North America and the unfavorable impact of currency, primarily from the euro and the Japanese yen, partially offset by improved price realization. Sales of new equipment decreased, and sales of aftermarket parts were about flat.

In Asia/Pacific, the sales decline was primarily due to lower sales in China and Japan. In China, the lower sales primarily resulted from continued weak construction activity. Sales in Japan declined due to a weaker Japanese yen, as sales in yen translated into fewer U.S. dollars and lower end-user demand due to weaker economic conditions.

Decreases in Latin America were primarily related to the absence of a large government order in Brazil that occurred during the first quarter of 2014 and continued weak construction activity.

Although still below prior peaks, construction-related activity continues to improve. Construction Industries’ profit was $740 million in the first quarter of 2015, compared with $688 million in the first quarter of 2014. The improvement was mostly due to the favorable impacts of price realization and currency, primarily from the Japanese yen, partially offset by lower volume.

The company expects that the improvement will come from developed countries and that economies in developing countries will, overall, grow at a rate slightly below their growth rate in 2014. Despite the outlook for modest improvement in global economic growth vs. 2014, significant risks and uncertainties remain that could temper growth in 2015, as political conflicts and social unrest continue to disrupt economic activity in several global regions.

The outlook for sales and revenues remains unchanged at about $50 billion for 2015, down from $55.2 billion in 2014. The primary factors contributing to the decline from 2014 are largely the same as expected three months ago: