With states shutting down construction projects and the overall economic activity grinding to a halt due to coronavirus, construction spending data will likely deteriorate further and faster during the coming months, according to ABC. 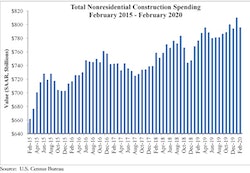 National nonresidential construction spending fell 1.8% in February but is up 2.5% compared to the same time last year, according to an Associated Builders and Contractors (ABC) analysis of U.S. Census Bureau data. On a seasonally adjusted annualized basis, spending totaled $795.1 billion for the month.

Private nonresidential spending declined 2% on a monthly basis and is down 0.7% compared to February 2019. Public nonresidential construction spending was down 1.5% for the month but is up 7.2% on a year-over-year basis.

“Data characterizing the economy prior to the coronavirus outbreak continues to trickle in,” said ABC Chief Economist Anirban Basu. “While nonresidential construction spending declined in February, according to today’s data release, the decline was modest and overall performance was not substantially different from prior months.

“However, with communities in Massachusetts, Pennsylvania, California and elsewhere recently shutting down certain construction projects in an effort to better support social distancing and with economic activity generally grinding toward a halt, the construction spending data will undoubtedly deteriorate further and faster during the months to come,” said Basu. “Unfortunately, that is not where the pain will end. Once the crisis is over, hotel chains will be weaker financially, more storefronts will be empty and fewer employers will be interested in relocating to high-end office space, which will result in diminished demand for nonresidential construction services even after the broader economy comes back to life.

“Typically, nonresidential construction holds up better during the early stages of a downturn as contractors continue to work through their collective backlog, which stood at 8.9 months in January 2020, according to ABC’s Construction Backlog Indicator,” said Basu. “That may still be the case, but given growing liquidity and solvency problems spreading through the economy, it is quite likely that many construction projects presently on the drawing board will be postponed or canceled. Backlog may disappear quickly as project owners resort to the use of force majeure clauses or other mechanisms to back out of contractual obligations. Time will tell, and eventually the extent to which projects are delayed will be reflected in the construction spending data.” 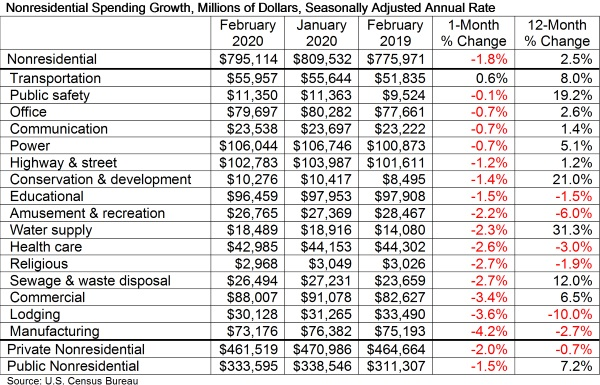 The Law: How Construction Contractors Can Protect Themselves from Coronavirus Losses