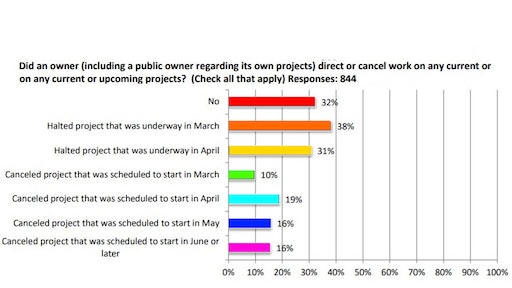 Forty-four percent of construction firms promptly received loan funds under the new federal Paycheck Protection Program, enabling many to hire or retain employees despite surging project cancellations. But half of the respondents to the latest installment in the Associated General Contractors’ coronavirus update surveys also reported that clients have ordered a halt to projects underway, and more than one-fourth report clients canceled projects expected to begin as far out as June.

“Most contractors report they have applied for the new federal loans, which are intended to enable small businesses to keep employees on their payrolls,” said Ken Simonson, the association’s chief economist. “This program has already delivered funds to nearly half of the survey respondents, and many of them have already brought back furloughed workers or added employees, even though more clients are halting and canceling projects.”

In addition to the 44% that already received PPP funds, another 15% said their applications had been approved but they had not yet received funding, 8% were awaiting a reply to their applications and 7% had applied but been told no more funds were available. Partly as a result of the loans, 13% of respondents said they had added workers.

“Although the loan program has helped, it will cover only a limited part of company expenses and is not enough to offset the huge drop in projects,” the economist added.

In addition to the half of contractors who had work cancelled, 67% of respondents to the survey (conducted April 20 to 23) said they had encountered project delays or disruptions. Forty-nine percent said suppliers had notified them or subcontractors that deliveries would be late or canceled. That percentage has risen each week since the association’s first survey, conducted March 17 to 19, in which 22% reported delivery woes.

Association officials added that 43% of firms would benefit from larger federal investments in infrastructure, while 35% would benefit from a pandemic risk insurance/COVID-19 business and employee continuity and recovery fund. They called on federal officials to begin work on new infrastructure investments, explore ways to establish pandemic insurance and a recovery fund to help offset expected declines in construction demand because of the coronavirus.

“The new federal loans are helping protect many construction jobs for now, but those funds are likely to run out well before demand for construction rebounds,” said Stephen E. Sandherr, the AGC’s chief executive officer. “The president and congress need to start putting in place measures to revive our economy by rebuilding our infrastructure and restoring private-sector demand for construction.”

See all the charts from AGC's survey 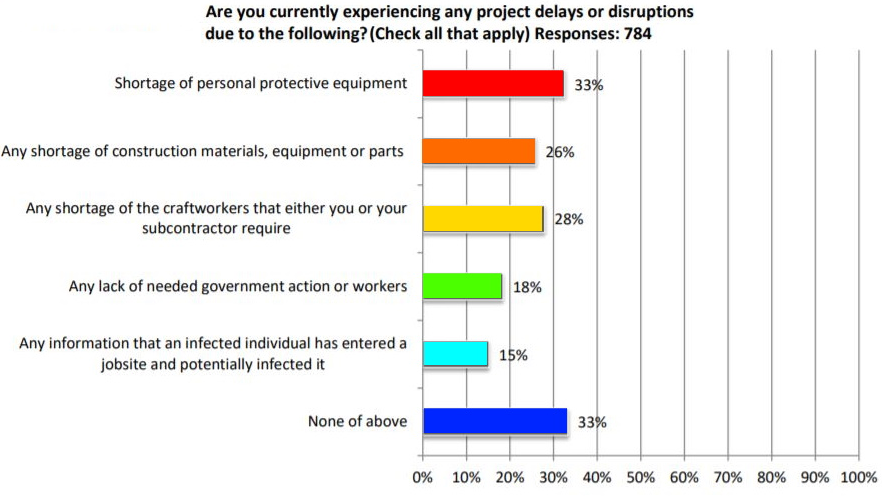 Construction has seen a surging acceptance of various forms of technology during the COVID-19 pandemic. But will it continue once the crisis is over?
Becky Schultz
Mar 3rd, 2021

Biden Admin. focus on small businesses assures that sole proprietors and businesses with fewer than 20 employees have a great shot at getting a first or second forgivable PPP loan
Larry Stewart
Feb 25th, 2021

CPWR offers suggestions to improve ventilation, and cut COVID-19 exposure risks, on enclosed construction sites where HVAC systems are not in operation.
CPWR -- The Center for Construction Research and Training
Feb 19th, 2021