The three-level subterranean basement will become the deepest, most expensive underground parking garage ever built in Miami. The vertical construction of the 47-story luxury tower is slated for 2021, to be completed in 2023. 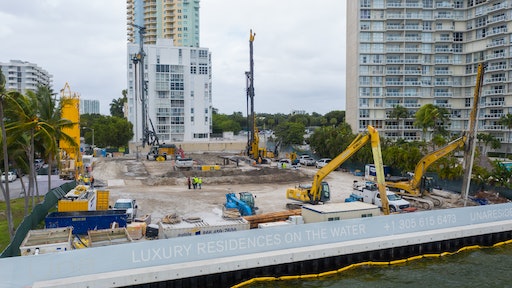 A rendering of the completed project. The 579-foot-tall tower was envisioned to embody the spirit of the city and the aesthetics of the Brickell neighborhood’s urban, waterfront environment.OKO Group/Cain InternationalConstruction is progressing on what will become Miami’s deepest, most expensive underground parking garage. Reaching nearly 50 feet and three stories below sea level, the 100,000-square-foot, 236-car garage for Miami’s Una Residences condominium will cost the developers $25 million to build. The first-of-its-kind subterranean parking garage, set on the edge of the Biscayne Bay waterfront, will become a key element of the 47-story luxury residential tower upon its completion in 2023.

Developers OKO Group, the luxury development group helmed by real estate mogul Vladislav Doronin, and Cain International have enlisted world-renowned architects Adrian Smith + Gordon Gill (AS+GG) to design Una Residences. The 579-foot-tall tower was envisioned to embody the spirit of the city and the aesthetics of the Brickell neighborhood’s urban, waterfront environment. The building’s grand, double-height lobby was designed with 20-foot-tall glass windows that frame the sparkling views of the bay, with a resort-style amenity pool deck set directly above facing the water surrounded by shady trees and lush foliage.

OKO Group is an international real-estate development firm established by Chairman and CEO Vladislav Doronin. OKO Group builds on the formidable expertise of Mr. Doronin, one of the most successful and respected international developers, and his peerless track record in constructing more than 75 million square feet of world-class commercial, retail and luxury residential space over a total of 71 buildings as Founder of Capital Group.

OKO Group’s current U.S. portfolio of prime properties and development projects include two luxury residential developments in Miami; Missoni Baia in East Edgewater and Una Residences on the Brickell Waterfront; and in New York City at the crossroads of 5th Avenue and 57th Street, the Crown Building which will soon become Aman New York.

OKO Group brings not only considerable financial strength to the U.S. market, but also a passion for working with the very best architects and designers in the world, including Pritzker Prize–winning architect Zaha Hadid; the preeminent architecture firm Skidmore, Owings & Merrill; Adrian Smith + Gordon Gill Architecture (AS+GG), known for designing some of the world’s tallest towers; visionary Hani Rashid of Asymptote Architecture; acclaimed interior designer Iosa Ghini Associati and the legendary designer Jacques Grange. As owner and Chairman of Aman, one of the most admired hospitality brands in the world, Mr. Doronin’s global business portfolio spans Europe, Asia and the U.S.

This open waterfront concept could only be realized by ‘hiding’ the parking garage underground – a challenging and costly approach that contrasts sharply with typical condominium developments in South Florida, which tend to feature a pool deck situated high atop several levels of parking. To create the underground structure, the development, design, and building teams worked closely together to determine the best method for subterranean construction in such close proximity to the bay. 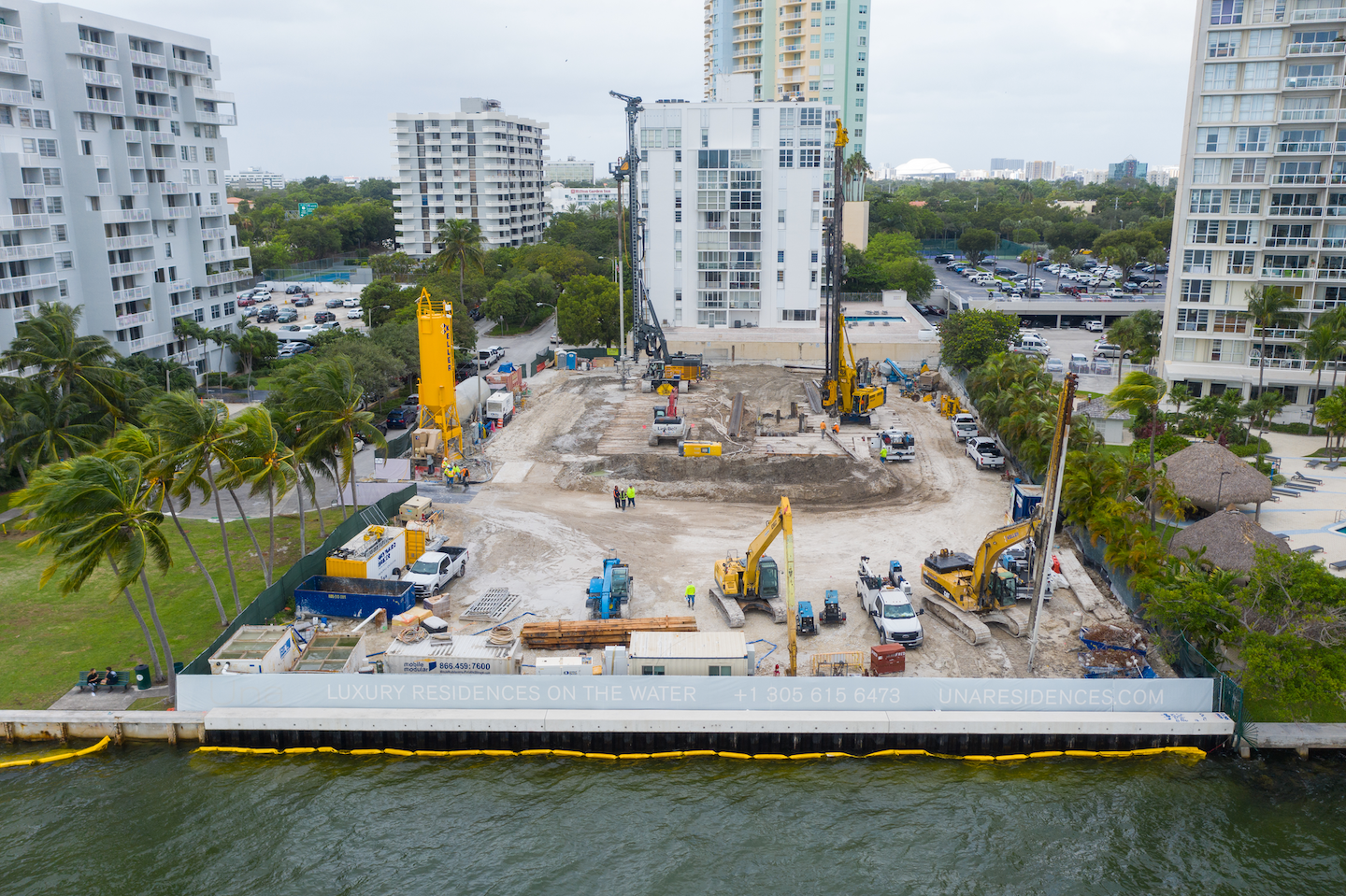 Engineers are using a state-of-the-art, 10-foot high-torque drill to create the bathtub by digging into the site’s crushed limestone, while simultaneously injecting cement slurry into the ground and blending it with the limestone rock and sand.OKO Group/Cain International

“OKO Group has extensive experience with subterranean construction, with our firm’s Capital City mixed-use development in Moscow encompassing a six-level garage for over 2,000 vehicles built 72 feet deep underground adjacent to the Moscow River,” said Ahmet Oktay Cini, Chief Operating Officer of OKO Group. “When conceptualizing the design for Una Residences in Miami, we envisioned a similar urban-style, efficient tower that would maximize as much space as possible for the use of residents and showcase the site’s waterfront views. The result was a modern condo tower without a parking podium, meaning more square footage for luxury amenities and residences.”

In order to build a garage that doesn’t flood, the building’s general contractor, a joint venture between Civic Construction and Ant Yapi U.S., along with specialty subcontractor Keller International, set out to create a massive watertight concrete box deep underground. Using highly advanced technology and equipment, the complicated undertaking requires workers to drill 800 holes 50 feet deep into the ground and fill them with concrete and water. The interlocking pillars create a cement block that is hollowed out to build the garage. 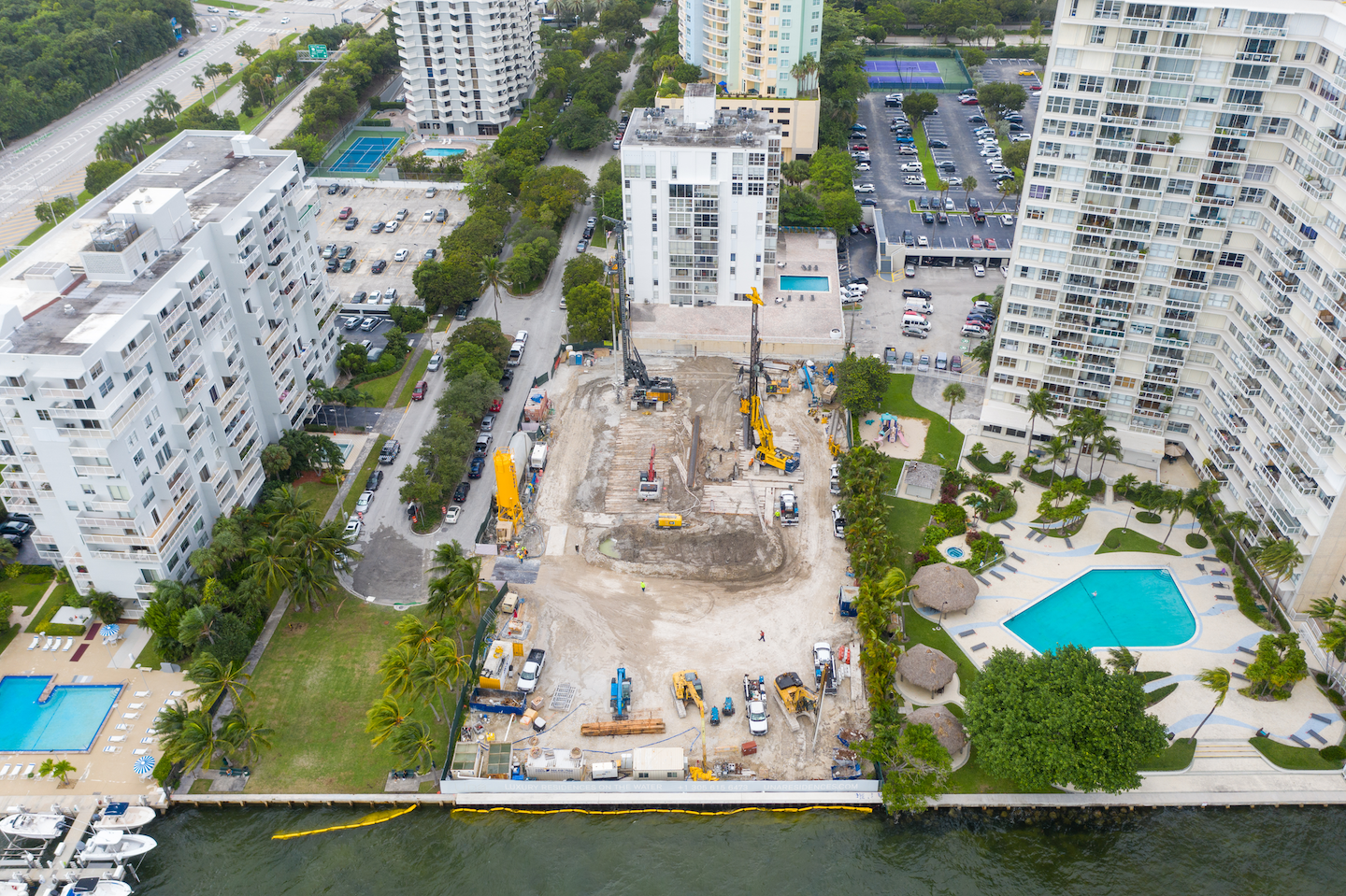 Six different types of equipment will be used in the construction of the bathtub/plug operation. This includes a soil-mix-predrilling rig, soil-mix-buttom plug rig, a twin soil (TSM) mix 20" wall cased CFA rig, a TSM 36" wall rig, as well as an 18" and 36" augercast piles rig.

Once the soil mixing process and tub is complete in early 2021, the construction team will begin drilling piles 135 feet deep into the ground to support the tower, and to hold down the floor of the tub during construction. The loose-mix soil inside of the tub will then be mass excavated – a three-month-long process – to reveal the new, waterproof underground form. Once the site is excavated, the building’s steel mat foundation will then be constructed followed by a massive concrete foundation pour. Once the three levels of vertical columns are completed in the underground basement, ground-level vertical construction will then commence, estimated to take place in late 2021. From there, the tower’s rise will move at a fairly quick pace, accelerating approximately one level a week through top off of the 47th floor in late 2022. A rendering of the completed project. The first-of-its-kind subterranean parking garage, set on the edge of the Biscayne Bay waterfront, will become a key element of the 47-story luxury residential tower upon its completion in 2023.OKO Group/Cain International“A below-ground garage of this caliber costs triple the amount of a typical parking garage. This kind of major investment in underground construction has never been seen before in Miami,” said William Real, President of Civic Construction Company. “The developers of Una Residences are sparing no expense when it comes to top-notch construction quality and efficient design, which will ultimately deliver a superior product for residents.”

Slated for completion in 2023, Una Residences will be comprised of 135 spacious condominiums spanning 47 floors boasting unobstructed views of the Atlantic Ocean, Biscayne Bay, and the Miami city skyline. Residences range from two-to-five bedrooms, measuring between 1,100 to 4,786 square feet in size, with two ultra-exclusive penthouses available. The tower’s secluded waterfront location, situated in the picturesque and private South Brickell area at 175 SE 25th Road, is only moments away from downtown Miami’s metropolitan city life, offering buyers the best of both worlds. Residences are priced from $2 million to $7.4 million, with penthouses up to $21.6 million.

Amenities at the boutique tower will complement and enhance Miami’s desirable outdoor lifestyle, including three swimming pools, a children’s splash-pad area and playroom, a movie theater, an Aman Resort-inspired spa and steam room, a state-of-the-art fitness center featuring yoga and personal training facilities, onsite dining, and more. Una’s amenities will also extend beyond the property, as residents will receive exclusive membership access to the Grand Bay Club on the beachfront of Miami’s Key Biscayne.