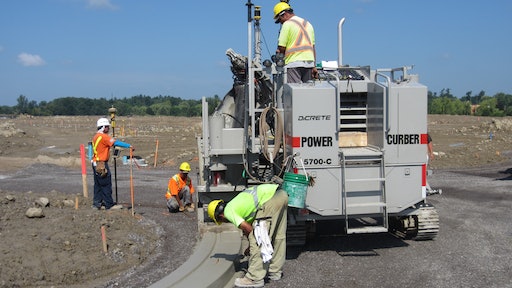 There was six miles of curbs throughout the development that TACC carved out and fine graded them with 3/4-inch stone as prep for the asphalt paver and placed the concrete curb and gutter using its Power Curber 5700-C with Topcon Millimeter GPS machine control.

Toronto-based Mattamy Homes is building a high end planned community in Oakville, Ontario, and TACC Construction, Ltd. will do the work to prepare the 800-acre site for home building and the finished paving of the network of roads.

“We’re completing all the site development earthworks, underground and all roadwork for this project,” stated Frank Saracino, road superintendent for TACC Construction. “We have seven weeks to complete our portion of the project.”

With the tight timetable, TACC relied on technology to ensure its productivity on the project. The company has been using GPS machine control on its earthmoving machines since 2008, but this was its first experience using the technology on its slipform concrete curb and gutter paver.

“The technology is incredibly fast and accurate so it helped us achieve grade tolerances without the dependence on survey crews pounding stakes everywhere,” said Saracino.

To level and balance the site and strip the topsoil, TACC used Caterpillar 621 scrapers and the Cat dozers equipped with machine control.

“What was new for us was using Topcon Millimeter GPS machine control on our Power Curber 5700-C,” Saracino said. “We like the Power Curber because its compact and designed for tight radius jobs, which made it appropriate for the subdivision with its meandering roads and cul-de-sacs. It was pretty amazing to see how efficient the Millimeter GPS Topcon system made the curber. We eliminated stringlines which saved us time, labor, concrete waste and it’s much more precise. The technology made the Power Curber at least one and a half to two times quicker than using traditional methods.”

There was six miles of curbs throughout the development that TACC carved out and fine graded them with 3/4-inch stone as prep for the asphalt paver and placed the concrete curb and gutter using its Power Curber 5700-C with Topcon Millimeter GPS machine control.

There were three mobilizations on this project as far as the curb and gutter work. DiCrete Construction first laid a gutter footing or base stage which was 20-inches wide and 6-inches thick. There are two rebars placed in the base.

The next two mobilizations were two stages of the 20-inch curb. Initially 9-inches of the curb are placed with the gutter base. After the road asphalt is paved the Power Curber comes back and places an 8-inch cap on the curb to finish it off to a proper height.

Mattamy Homes hired its own engineering firm to create the original site plan that TACC adapted for use with the Topcon GPS machine control systems by creating their own 3D digital model. Both the earthmoving machines and the slipform paver used the same site model.

“Because our curb machine runs so efficiently and accurately with the technology we’ve literally experienced a 10 percent savings in our concrete use,” stated Angelo DiGravino, general manager for DiCrete Construction Ltd. “The Power Curber with the Topcon technology is running so fast we recently broke a production record of ours - we poured 3.5 miles in one day, which shows how proficient we’ve become in using the system.”

“We beat each deadline by two to three days, which is pretty impressive considering how tight the deadlines were,” Saracino said. “This was our first project where we were totally integrated with technology on our earthmoving and road construction. The technology provided seamless transition from task to task.”

“We were given a tight timeline and achieved it. The project owner is happy with the time lines and quality of our work. If they’re happy… we’re happy. It’s as simple as that,” DiGravino said.

The Power Curber 7700 is a multipurpose slipform machine designed for a wide variety of offset applications and paving up to 20 ft. wide
Power Curbers & Power Pavers
February 27, 2017
Concrete Equipment & Products

The two companies will share industry knowledge, establish a common dealer network and market each others' products and services
Miller Formless Co.
October 10, 2016

The absence of stringline allows easier access on paving projects.
May 15, 2015

Phoenix Curber's iTerra control system provides ease of use and setup for cross-slope and grade configuration, with no separate control boxes required
February 6, 2015

Ed Taylor, vice president of product development for Phoenix Curbers, talks about the changes the company made to a curb cutting saw to adapt it for more cutting applications
February 6, 2013

The Curb Roller, a 160-lb roller screed for curbs, meets the needs of small to large sized contractors by offering relief from hand forming without the high price of machines.
Curb Roller Manufacturing
September 28, 2012

Video: How to Make Money with the Lil' Bubba Curb Machine

Profile of a project from estimate to cleanup showing how the Lil' Bubba Concrete Curbing Equipment works and how much profit a typical project turns (3:56 min.)
September 24, 2012

4-hp concrete curber stamps stone, brick or wood patterns in curbs up to 8 by 12 in.
The Concrete Edge Company
September 24, 2012

With optional heavy-duty tracks, the Curb Fox 5000T-HD slipforms pavement up to 10 ft. wide and barriers up to 36 in. high
Curb Fox Equipment LLC
September 7, 2012

Trims and pours simultaneously, pouring a barrier up to 42 in. high and paving flat work up to 8 ft. wide
Overbuilt Paving & Mining Inc.
August 10, 2012