The elegant, sweeping curves of the three interlaced cast-in-place reinforced concrete rings that define the structure belie the complexity of the project’s design and construction. 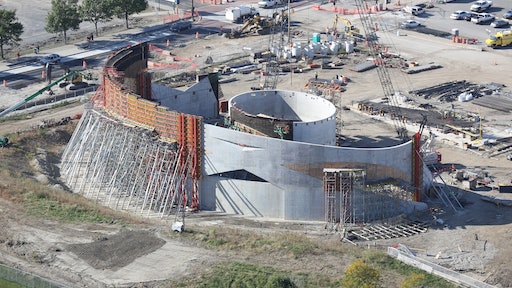 Concrete placement was recently completed on the National Veterans Memorial and Museum in Columbus, Ohio, listed in the Architectural Digest as one of the most anticipated Buildings of 2018.

Designed for the Columbus Downtown Development Corporation by Allied Works Architecture, the Memorial Museum occupies seven acres of a 21-acre site along the Scioto River. The structure consists of a collection of concentric arches rising from the earth. The arches cross to create interwoven concrete rings that form the museum walls and support an upper level sanctuary, providing “a path connecting earth to sky.

“This is the most complicated structure I’ve ever worked on,” says Rob Ford, project manager for Baker Concrete. "It is so complicated, in fact, that no dimensions are in the plans."

In essence, the entire project is being built from a 3D model, which Ford says made laying things out especially difficult. “Each of the three rings takes a circular sweep around the building, but they don’t do it at any particular radius – it’s constantly changing. You can’t just pull a tape to back check your coordinates, because there aren’t any corners.”

But the challenge of designing and building the formwork was even greater.

Baker turned to PERI to provide the formwork for this high-profile project with virtually no room for error. Overall, the project required about 100,000 sq. ft. of wall forms, all built using PERI’s VARIO system and supported by PERI UP scaffolding and shoring. In addition to all of the forms being curved, every form panel had to be built to the exact curve and specifications of a particular location on the project.

“There’s no repetition,” says Adam Shaw, PERI’s lead designer on the project. “We could reuse the VARIO components, but each panel was different.”

Perhaps even more challenging and impressive were the 400 void forms required to create the openings in the concrete rings. These plywood box-outs were CNC-cut in PERI’s yard and ranged in size from 40 to 300 sq. ft..

“All the voids also had a knife-edge, tapering about two and a half feet on all the upper edges,” Shaw says. "Many tapered to zero at the Xs. This was a major engineering effort for us.”

Because of the dense reinforcement and the desire for an architectural quality finish, Baker pumped self-consolidating concrete from the bottom of the forms. The wall geometry dictated a number of very large pours, as long as 120-ft. and 40-ft. tall. Steel reinforcement cages — some approaching 100,000 pounds — were assembled on the ground as the formwork was erected, then lifted into place. In many cases, achieving the openings required that the void box-outs had to be put into place after the rebar had been lowered into the formwork.

“The box-outs were the key to the strategy of how to make the voids work,” Ford says. “The vertical forms handled the plan geometry, going around the radius, and the boxes handled the void geometry.”

Almost the entire structure was designed to be exposed architectural concrete, and originally was slated for sandblasting to ensure a uniform surface. However, the early concrete finish turned out so well off the form that the architect decided to forgo the sandblasting. Designed as a tribute to veterans, rather than as a war memorial or military museum, the Memorial Museum will feature interactive and educational exhibits, beautiful landscaping, and iconic architecture, including the spiral processional rising to a rooftop sanctuary. It will also include permanent and temporary exhibits and meeting rooms for veterans groups. The facility is expected to open in 2018.

Ed. Note: This article was supplied by PERI Formwork Systems