Fab-Form's Fastfoot product makes quick work of a concrete pour, allowing Force Concrete & Masonry to get ahead of frigid winter temperatures and keep its project on track. 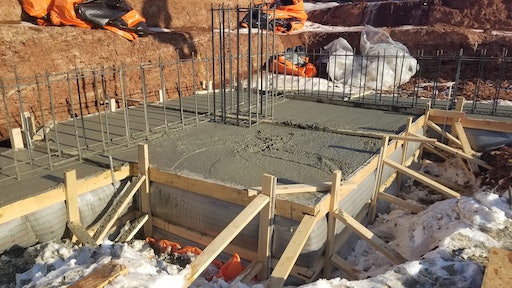 The winter season can bring on a series of challenges: snow, ice and severely low temperatures. These challenges are even more significant for concrete contractors who are often forced to shorten their construction season to avoid the problems associated with placing concrete in cold temps.

Challenges first began when the jobsites’ ground was frozen even after excavation, prompting Force Concrete & Masonry to run warm water in an attempt to thaw it. That plan backfired, however, when the crew arrived the next day to ice that was up to 4-in. thick.

The New Jersey contractor ended up renting a ground thaw machine, which runs hoses filled with anti-freeze and that are heated up in a boiler.

“We spread it everywhere to make sure the ground stayed thawed because we can’t pour concrete on frozen ground,” explains Bill Pavlic of Force Concrete & Masonry. “Our schedule was so tight, we had no option but to rent the thaw machine.”

Force Concrete & Masonry first started working with Fab-Form and its Fastfoot product about 10 years ago, says Joey Fearn, sales manager for Fab-Form. “They’ve been tinkering around with the product and learning how to use it more efficiently for the last decade,” he notes.

The Fastfoot product, which is made of high-density polyethylene fabric, differs from traditional plywood not only from a sustainability standpoint, but also from a labor efficiency aspect.

Fearn explains that workers using fabric don’t have to setup heavy plywood formwork, strip and clean them, and move them to the next jobsite. Fabric forms are left in place, relieving back pain and keeping the guys fresh.

“They’re able to set up a lightweight skeleton with two by fours or two by sixes and then staple Fastfood ontop,” Fearn says. “The weight of the material is one hundred times less than traditional platforms, so the wear and tear on the workers is eliminated. The lumber framework is also easier to strip because the concrete doesn’t touch it.”

Force Concrete & Masonry had a limited amount of time—just six months—to complete the project. The company had to work six days a week for the allotted amount of time. In order to expedite the process, they relied on Fastfoot to reach their goal.

“When you strip [the forms], you only remove the lumber framework,” Pavlic says. “The fabric conforms to the uneven ground, which makes it a lot easier. If you’re using regular forms, you have to go back and patch in the bottom or other spaces.”

The fabric can be used once and prevents concrete from touching the lumber framework. It also prevents moisture from getting into the footings. The lumber framework can be reused and easily stripped, also icnreasing productivity for the workers.

Because Force Concrete & Masonry was able to setup huge amounts of formwork before the pour takes place, they were able to pour all the concrete in one day, keeping the project on track. T

“Concrete is the only building material in the world that is a liquid and can adjust to the uneven ground. Then it becomes a solid for the life of the building,” Fearn says. “Every other material like steel or wool is rigid and cannot adjust, while concrete will just flow and form what it needs to. That’s why using a woven plastic is ideal because it is deformed by the concrete to conform to the ground below it.:

While the benefits of using the woven plastic are two-fold, there are still challenges that surround it.

Both Pavlic and Fearn agree that there is a stigma in the industry on using new materials, suggesting that contractors can be set in their ways.

“We’ve been forming concrete for centuries using ridged forms. But using fabric is a paradigm shift for the industry,” Fearn says. “It is hard for some people to wrap their heads around, but Bill is an innovator that thinks outside the box and can see the benefits.”

Resistance first starts when using woven plastic is brought into the conversation. Often people say no to using the product because they are unsure of how it can hold concrete. Pavlic explains that the weight of the concrete on the plastic helps support the bottom of the form, reducing by two thirds the lateral pressure on the bottom of the forms through the resistance of the fabric to the ground below.

Meanwhile, in order to get the plastic to work well, you must be able to drive stakes into the ground. The company had to drill holes to hold the ledger tight. In addition, when using plastic it can be challengin to have forms higher than 3 ft. because it is difficult to control.

Still, plastic is a growing trend in the industry. It is cheaper and can also save labor on the job—something that is crucial during the winter.

How to Plan for a Cold Weather Concrete Pour

Is There a Future for Fabric-Formed Concrete Structures?

An Introduction to Fabric-Formed Concrete for Architectural Structures