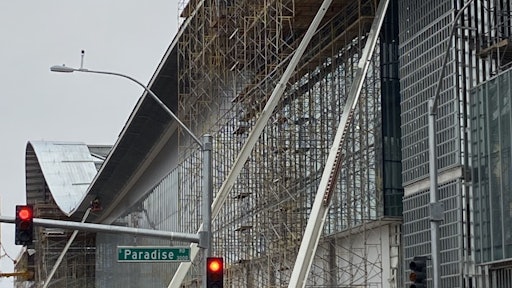 Construction workers on behalf of the Las Vegas Convention and Visitors Authority (LVCVA) commenced the extensive process of pouring 600,000 square feet of concrete flooring in the main exhibit hall in the new West Hall expansion of the Las Vegas Convention Center (LVCC). The process will take between four and five months to complete and is a major step forward in the expansion construction, which is now 77% complete.

Concrete Pour & Expansion by the Numbers

333: Number of volleyball courts the 600,000 square-foot expansion hall could accommodate

328,000: Square feet of space in the new exhibit hall that will be column-free, the largest column-free space in North America

For time lapse footage of the concrete pour and the latest pictures of the expansion, click here

Conversations with high school students and guidance counselors can direct the next generation of workers to these lucrative occupations
Jun 21st, 2021

While the industry supports utilizing American labor and materials, these provisions would make it much more difficult for the construction industry to use basic construction materials not sourced in the USA, driving up cost and completion times
Jessica Lombardo
Jun 17th, 2021

TWINTIER® technology allows ironworkers to get the job of tying rebar done quicker. Form up to 4,000 ties on a battery charge. Use the exact amount of wire need for each tie. Save time. Save money.
Jun 1st, 2021

Comprehensive verification reports allow suppliers to prove to contractors that their concrete was delivered on time and according to specification.
Coretex
Jun 10th, 2021