Monthly Confidence Index for Equipment Finance Industry Up in November

Confidence in the equipment finance market is 54.9, an increase from the October index of 51.4 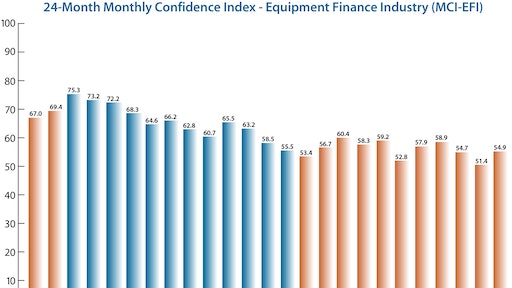 The Equipment Leasing & Finance Foundation (the Foundation) released the November 2019 Monthly Confidence Index for the Equipment Finance Industry (MCI-EFI). Designed to collect leadership data, the index reports a qualitative assessment of both the prevailing business conditions and expectations for the future as reported by key executives from the $900 billion equipment finance sector. Overall, confidence in the equipment finance market is 54.9, an increase from the October index of 51.4.

When asked about the outlook for the future, MCI-EFI survey respondent Quentin Cote, CLFP, President, Mintaka Financial, LLC, said, “It appears we have absorbed the headwind of the trade wars. Consumers still seem to be pulling the economy forward.”

Perkins to Focus on Future at ARA Show 2020

Mortenson is teaming with Built Robotics to solve issues on remote sites and cope with labor shortages through fully autonomous construction equipment
June 5, 2019

Electric Self-Propelled Scissor Lifts were the only equipment type to see rate increases of over 2%. Crawler-Mounted Hydraulic Excavators had the second largest increase, at 1.51%.
EquipmentWatch
April 24, 2019

With the example of the European Union’s more stringent Stage V diesel emissions limits, will the U.S. be satisfied with Tier 4 Final?
Nathan Medcalf
February 4, 2019

Used Equipment Outlook for the First Half of 2019

For those looking for a used machine, the combination of more availability and lower demand makes it a great time to pursue a purchase.
January 14, 2019

“Our 2019 guidance reflects the healthy momentum we see going into year-end and our confidence that positive conditions will prevail in the coming year," says Michael Kneeland, United Rentals CEO.
United Rentals Inc.
December 19, 2018

Do You Need a Crane Operator Certification?

On December 10th, OSHA’s Crane and Derricks in Construction Rule went in to effect and there are two criteria the asphalt pavement industry should be aware of
December 17, 2018
Business

The Silver Lining of the New Lease Accounting Standard

Not only are many of the lease accounting changes relatively neutral, there is actually a silver lining with numerous positive impacts, says ELFA president
December 17, 2018

Video series looks at how technological advancements have changed infrastructure and what to expect going forward
Topcon Positioning Systems
November 28, 2018

Construction workers are at high risk for lung cancer and other lung diseases and should take proper care and precautions to keep healthy
October 26, 2018

Confidence in the equipment finance market eased for the month to 63.2, a decrease from the September index of 65.5
Equipment Leasing & Finance Foundation
October 23, 2018