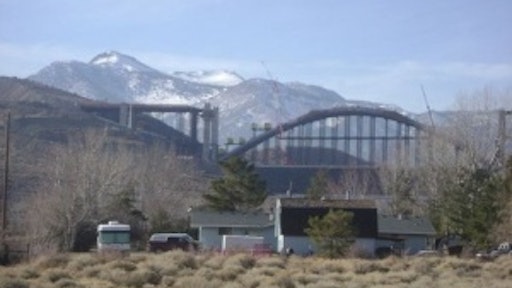 Contractor C.C. Myers is constructing a series of nine bridges for the new 8.5-mile highway I-580 extension between Reno and Carson City in Nevada. The project is not a small undertaking.

The work is located not far from the Nevada-California border, at roughly the same latitude as San Francisco. Intended to relieve high traffic volumes, the new roadway will include three operating lanes in each direction. The magnitude of the project is indicated by the schedule budget of 650 days for construction of the Galena Creek bridge and the final project completion estimated to be during 2011.

The Galena Creek Bridge is 1,722 ft. long with a 690-ft. main span that rises 295 ft. from the creek to the bridge deck. When completed, the structure will be the longest concrete-arch bridge in the U.S. It will actually comprise two arches, each carrying three lanes of traffic.

Concrete for the arch bridges is poured within a complex falsework structure, and then the falsework is lowered away from the hardened concrete. However, planning for the work indicated that the falsework for this job would be too heavy to lower in the usual manner using cables and winches. C.C. Myers chose a novel solution to the lowering challenge: strand jacking.

The jacks work by grabbing and lifting or lowering cables passing through their hollow centers (Figure 1). Lowering each section of falsework requires twelve 85-ton jacks.

But jacking capacity is only part of the story. Uniform lowering at all twelve points is critical. Non-uniform lowering would result in undesirable orientation of the falsework section and shifting of the load weight from some cables to others.

In the system provided by Enerpac Integrated Solutions, each jack is electronically controlled and networked to a digital controller. The jacks are intelligent devices with built-in sensors for closed-loop operation with the controller, and movement of the jacks is synchronized to within 0.04 inches between leading and lagging jacks as they lower the falsework structure to the ground. In addition to stroke and load alarms, the controller provides individual stroke and load readouts.

Since the lifting system will be exposed to weather for the considerable duration of the project, C.C. Myers' staff designed and fabricated a dozen steel enclosures fitted with forklift pockets and lifting eyes. Each enclosure houses a strand jack, a 15-hp electric hydraulic supply, and a Myers-designed cable coiler. Power is provided by on-site generators.

Each enclosure in the quad-clusters houses a strand jack, a hydraulic power unit and a cable coiler. According to Bill Kidwell of C.C. Myers, the suspended loads at Galena Cree k average 110,000 lbs. per jack, and falsework sections are lowered at about 60 ft. per hour.

Although the project employs twelve jacks, the controller architecture is modular, allowing control of up to 32 jacks with one controller. Other system capabilities aimed at larger projects are networking of multiple controllers and data logging. The system's overall flexibility should enable C.C. Myers to utilize it on future projects.

Information and images provided by Enerpac.