Delays pushed construction into the opening of the 2013 shipping season, and a traffic control situation became more complex as road traffic signals on the bridge needed to replicate the Seaway's remote-operated controls 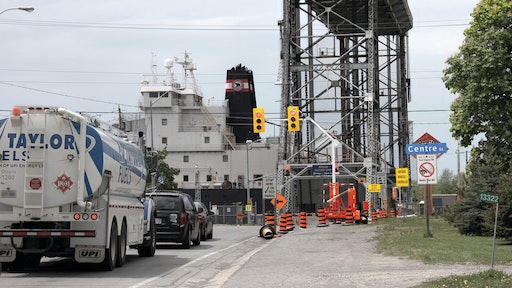 Two sets of portable traffic signals had to work in conjunction with the bridge's existing traffic control system to keep road traffic flowing during shipping season.

Provide a traffic control solution to limit road traffic to one lane during a road repair project on the Allanburg Bridge, which had run into construction delays.

Located in the Niagara region of southern Ontario, the Allanburg lift bridge spans 200 feet across the Welland Canal, part of the St. Lawrence Seaway system. Maintenance to the road was planned while seasonal Seaway traffic was closed over the winter months. North America Traffic Inc. (NAT), based in nearby Port Colborne, Ontario, was contracted to provide a traffic control solution to limit road traffic to a single lane. The order called for two sets of portable traffic signals to work in conjunction with the bridge’s existing traffic control system: one at each end of the bridge plus two for the intersection on its east end.

The construction work ran into delays and extended into the opening of the 2013 shipping season. The traffic control situation suddenly became much more complex. The lift bridge must be raised to allow ships to pass on the canal. Road traffic crossing the canal is normally controlled by traffic lights operated from the Seaway Authority’s remote station, a few miles from the bridge.

To manage traffic for both construction work on the bridge and Seaway traffic under it, NAT’s portable signals were now required to replicate the Seaway’s remote-operated controls. Normally, the signals are coordinated so when the bridge is about to be raised, the traffic signals allow vehicles to clear the bridge without getting caught between the lights. The portable signals would have to integrate with the bridge controls and also coordinate the single-lane flow of road traffic.

The contractor foresaw the delay in the project and notified NAT of the difficulty two weeks before the Seaway would open. “Our technician went out to the site on a Wednesday to scope out the traffic and signaling," said Jonathan Abraham, NAT's service and compliance coordinator. "We coordinated with the Seaway technicians and the MTO (Ontario Ministry of Transportation), and programmed a new control module. We had the portable signals operating by the following Thursday, on the first day of spring.”

NAT developed the required controls to synchronize the portable traffic signals with the bridge control signals, including an override requested by MTO and a confirmation signal back to the Seaway control station. Because of NAT’s rapid turnaround on the new control system, the contractor was able to proceed with the bridge repairs with no further hold-ups.

According to Abraham, the flexibility to meet the needs of the Allanburg Bridge project is inherent in the design of NAT portable traffic signals. “Our programming circuitry has a built-in pre-empting option that we often use to manage traffic at railway crossings. The signals cycle in normal pattern for one-lane traffic, until the sequence is pre-empted by a relay from the railway’s crossing system. We adapted the railway pre-emption feature into a “hold for bridge” program, including a 2-minute delay for traffic to clear the lane before the bridge lift was activated.”

“After we delivered the portable signals to the site, we simply connected a cable to the bridge control circuitry through a 12VDC to 120VAC relay.”

The bridge repairs required two months more to complete, as work was interrupted repeatedly for canal traffic, but the portable signals operated flawlessly throughout the project. Powered by solar cells and battery packs, NAT signals have a 30 day autonomy rating for periods of low light or minimal sun exposure. The signals are synchronized by radio transmissions, but had no difficulty with potential interference from boat communications and the steel structure of the bridge.

If you’re going to take the time and effort to bid for a state, local and education project, be sure to put your best foot forward.
Ben Vaught
January 22, 2021
Follow Us