50 Years of Equipment Impact: Attention Shifts to the Operator

Safety and ergonomic advancements have made machines more friendly for those behind the controls. 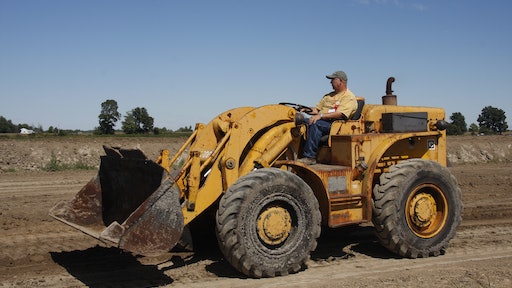 Early construction machines were often dangerous if you were not extremely cautious. “I like pointing out to visitors at our museum that we have a prototype crawler tractor built in 1913,” says Tom Berry, archivist, Historical Construction Equipment Association (HCEA). “Everything is exposed on it. One false move and you will lose a body part on it.”

In the 1970s, safety improvements really took hold. “In the ’70s cabs were introduced universally,” says Keith Haddock, national director of the HCEA and author of several books on the history of construction equipment. “Machine access, footholds, safety for the mechanic, better lighting for night shifts and backup alarms were more popular. People had a new attitude and anything they could do to improve safety and reduce accidents took a big jump forward. That translated into the machine, making it safer to operate with easier access to the cab and ROPs structure.”

“This is a safer industry than it ever used to be,” comments Brian Rauch, senior vice president of engineering, manufacturing and supply management, Deere & Company. The company claims to be an innovator in rollover protective structures (ROPS). “We pioneered that and encouraged it to be adopted in the industry. Clearly, the operator is much better protected from a rollover and being thrown from the vehicle.”

The concept of safety began to change the way equipment was designed.

“You started looking at operator comfort as safety, too,” explains Katie Pullen, Case Construction Equipment. “People were spending a lot of time in the heat and the exposure. A rollover bar wasn’t really cutting it anymore, so you started seeing the four-point ROPS and the covered canopy. As pilot controls became more widely used, safety measures were put in position. It is just amazing what the newer electronics and hydraulics do for safety.”

Many machines now offer seat-activated safety switches and other safety interlocks. “The spring-applied and hydraulically released parking brakes are a huge safety item, because when you turn the machine off, you don’t have to worry about loose cables,” says Pullen. And many machines offer the ability to maintain steering control even if you have a failure on the road.

Small developments have led to major improvements. “It doesn’t seem like much, but that little wand on the side of the excavator seat or the pull-down levers on bulldozers so an operator can’t get out of the seat with the machine running — those are important innovations that have saved countless lives,” says Rauch. The occurrence of people getting injured while operating machines is much rarer than it was even 30 years ago. “Park brakes, brake locks and interlocks are all major innovations that have meant quite a bit for our industry.”

Even ground level service has made machines much safer. In the past, designers didn’t put as much effort into service access from the ground. “If it meant that you were going to climb on a machine to fill the hydraulics tank, that is what you were going to do,” notes Pullen. But the emphasis has changed. “We don’t want people falling off the machines. We want people to do all of their service from ground level. As we develop a machine, especially with emissions and having to make things fit differently, we make sure customers still have safe access to everything.”

Some innovations, such as the Extend-a-Hoe introduced on Case backhoe-loaders, enhanced both safety and productivity. “You want to be able to position the machine further away and dig without having to worry about the trench collapsing,” says Pullen. “Also, there were more codes put in place that required contractors to start putting pipes and septic systems lower. They really needed that extra reach and it really took off, becoming way over half the orders.”

The Science of the Operator Environment

Construction equipment from the ’60s through early ’70s had crude operator stations. There were no frills and little in the way of comfort or protection from the elements. This has changed dramatically. “A lot of consideration is given to the operators compared to 50 years ago, including better seating and cabs,” says Haddock.

Since the basic cab’s introduction, there has been a steady progression from heaters to full climate-controlled HVAC systems and from rigid-mounted seats to mechanical suspension seats and now even fully adjustable air ride seats.

Ergonomics really evolved as a science over the past two decades. “The physical layout of the operator station, the interface with the implement, transmission and engine controls, as well as increased visibility have improved the operator experience, resulting in increased comfort, control and productivity,” says Chuck Sahm, automation & enterprise solutions theme manager, Caterpillar. “As an example, an intuitive joystick control system can significantly reduce hand and arm movement compared to a multi-lever configuration, promoting higher productivity from less fatigued operators. Additionally, electrohydraulic control systems have provided the foundation for advanced machine controls, enabling superior controllability and precise and predictable hydraulic movements. These features can automate many of the tasks an operator performs and help make inexperienced operators productive very quickly.”

Changes in the available labor pool have driven dramatic improvements in the operator environment. “It is much more difficult to attract and retain skilled operators,” says Rauch. “We don’t have a lot of people coming off farms that have equipment experience. Frequent operator turnover and the desire for companies to retain more operators resulted in manufacturers doing a lot more for operator comfort. We have more comfortable controls that require less effort and we have driven down the noise substantially in the operator’s station.

“We have done a lot to make our machines easier to use,” he continues. “One of the more profound things has been grade control. It is very difficult to find a highly skilled dozer operator. Anybody can drive a dozer, but not many people can shape terrain. Where it might have taken six months or a year to become proficient enough to grade, now the operator can hold a tenth of a foot or half that on his first day of operation.”

Rauch adds, “We are seeing the adoption of GPS technology and machine control on our products, technology we could not have envisioned 10 years ago and now it is commonplace.”

Automation is going to be at the forefront as the operator environment continues to evolve. “We are going to continue to focus on operator safety and comfort,” says Rauch. “You need to make it easier for the operators to gain experience and use. I fully expect a lot of semi-autonomy — things that make the operator’s job easier.”

Brad Humphrey and the team discuss all things related to the jobsite and running a successful business. Tune in for a new episode every other Wednesday.
August 1, 2021
Latest