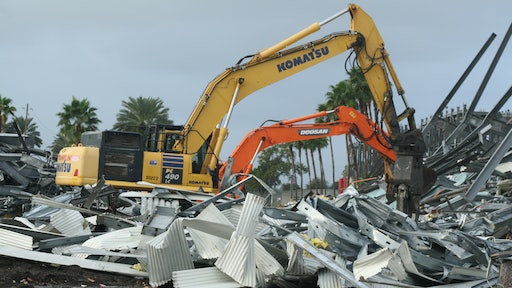 Racing fans visiting Daytona International Speedway this upcoming season will undoubtedly do a double take when looking toward the track’s backstretch. Gone is the iconic skybox with “DAYTONA” emblazoned across its face, as well as the massive stands of bleachers that flanked it on either side. In an effort to improve the overall fan experience — and in conjunction with its $400 million “Daytona Rising” track expansion — International Speedway Corporation (ISC), the track’s owners, opted to remove 46,000 backstretch seats and the skybox tower. To achieve this, ISC contracted with Frank-Lin Excavating, which, using equal parts innovative technology and proven expertise, systematically removed most of the bleachers before giving way to Phoenix, MD-based Controlled Demolition Incorporated (CDI), which brought down the skybox through the controlled use of explosives. Relatively speaking, it was over in the blink of an eye, apparently a prerequisite for servicing an organization with speed in its DNA.

Where the action is

Built in 1959, Daytona International Speedway has, over the years, become one of the most recognizable NASCAR tracks on the circuit, both to hardcore fans and neophytes alike. It has undergone several renovations in the past, but none to the extent of “Daytona Rising,” which will offer improvements in everything from seating comfort to ease of access to added concession availability and much more. A major component of the project included removing the backstretch viewing areas, according to Pete Charamut, president of Melbourne, FL-based Frank-Lin Excavating.

“It was decided by ISC that, to give the racing fans what they really wanted, the focus, from a track perspective, should be on enhancements to the frontstretch,” he says. “That’s really where all the traditional action happens: the start, the finish, most of the pit activity and so on. So everything on the backstretch — the grandstands, steel framing, skybox, elevator, concrete columns and foundations — was slated for demolition. We bid the project, were awarded it and started our part of the demo in early September.”

Other than the location itself, there were a number of factors that made this job different from others Frank-Lin has done. For one, many of the aluminum bleachers located west of the skybox had been purchased and were being dismantled for removal, making the demo company’s progress dependent on the aluminum contractor. Secondly, with the exception of the actual time of the blast itself, the track had to remain operational while the demo was in progress. In addition, there were concrete restroom structures that ran along a good part of the backstretch that needed to be left intact for possible future use, complicating that facet of the project.

“We cut our teeth in demolition doing massive projects for the Kennedy Space Center up the road,” Charamut says. “So a challenge here and there is certainly not uncommon, nor would we let it prevent us from doing a great job for our customer.”

A good part of what makes Frank-Lin the go-to resource for major demolition projects on Florida’s Space Coast (and beyond) is the company’s ability to tap just the right technology for the job, whether it is a high-reach excavator for a gantry building dismantling or a processing tool with interchangeable jaws for demolition of concrete/steel structures. For processing structural steel at Daytona, Charamut says they used a pair of products from Genesis Attachments: the company’s shear operator and supervisor Lee Messenger was running an LXP-400 mounted on a Komatsu PC-490, and operator Hattie Belichick was in charge of a Versi Pro mounted on a Komatsu PC-78.

“For added processing capability, we contacted Barry O’Brian at Linder Machinery, with whom we have a great working relationship,” he says. “They set us up with a nice rental package: a Komatsu PC-360 with a Genesis GXT 665R shear, which my son, Frank, ran when he wasn’t handling the loadout of material using a Doosan DX 300 with a bucket and thumb.”

Once Messenger and Frank Charamut studied the construction of the grandstands and skybox area, they were able to cut the support braces and structural columns starting on the east end working toward the skybox area, while the company that had purchased the aluminum bleachers worked to stay ahead in the west grandstand.

“It bears mentioning that, as on all our jobs, most of the logistical issues could not have been worked out without the help of Chrissy Rogel and Randy Burton, our office and field managers,” Charamut says.

The tools Frank-Lin chose for the project were selected for their ability to provide both the cutting force needed to process some of the larger structural steel and the versatility to handle other materials as well. “Having different jaw sets at our disposal gives us the ability to have one processor that can handle a variety of functions — invaluable given the unique nature of some of our projects.”

The centerpiece of the demo — both literally and figuratively — was the skybox tower that loomed some 14 stories high and has served as the backdrop for every major Daytona race in recent memory. Original plans called for Frank-Lin to trip the tower’s legs to bring it down, but a number of factors, including some unseasonably stifling September temperatures, prompted a revisit of that plan.

“All the glass for the skybox was intact, so the temperatures inside were unbearable,” Charamut says. “Our crew could not adequately prepare the interior like we had planned, so we spoke to ISC and, with their approval, decided to bring in CDI to use explosives to bring the structure down. Before we could do that, however, we knew we had to protect the existing asphalt in the drop area, so we created a cushion of sorts by hauling in 150 loads of fill dirt from the speedway’s stockpile and supplementing that with 40 dragline mats to reduce the risk of damage from the skybox when it fell.”

CDI, one of the world’s foremost experts in explosive demolition, was a natural fit for the project, both from a perspective of the job at hand and because the two companies had a working familiarity with each other.

“We’d previously worked with Frank-Lin’s site manager on another project, and it was his suggestion that led to their request for a proposal from our company,” says Mark Loizeaux, CDI’s president. “Once we were awarded the bid to bring down the tower, we worked closely with Pete and his team to move in that direction. In addition to their work with the lowrise structures, they also performed environmental remediation and prestripping of the skybox itself in order to prepare the post-implosion debris for handling.”

The sky is falling

Daytona International Speedway had to remain operational throughout the demolition process, so any risk of debris from the implosion landing on the track had to be eliminated. The CDI team addressed that issue through placement of the charges.

“We placed 22 linear shaped charges to sever the skybox’s steel columns sequentially, allowing the structure to roll away from the speedway track,” Loizeaux says. “An additional 12 holes were drilled in the reinforced concrete columns at the skybox entrance, and a small quantity of nitroglycerin-based dynamite was used in each to fracture and fell them. The implosion sequence was initiated using a non-electric initiation system, which eliminated the risk of interference from a passing thunderstorm or any radar and radio frequency energy emanating from the adjacent Daytona Airport.”

He added that a small quantity of explosives goes a long way when felling tall, slender structures; the total weight of explosives used at the skybox site was less than 25 pounds. The implosion was flawless and, in less than 10 seconds, the iconic Daytona Skybox became little more than a part of the track’s history.

In the cleanup slot

With material on the ground and an “all clear” verified by the CDI team, Frank-Lin’s crew set to work processing the mountain of debris left in the wake of the implosion. The crew first separated out the material as best it could, then used shears and processors to get it down to a manageable size.

“The LXP and GXT easily handled most of the heavier structural steel — beam sizes that were up to W30 and W32,” Charamut says. “We used the Versi Pro for both segregating aluminum from the steel and tin prior to loadout and, by switching to the shear jaws, processing some smaller pipe. With the tools we had at work, we really had the whole gamut of the job covered.”

Frank-Lin contracted with Tampa-based MD Metal Recycling to handle the hauling and removal of all the ferrous material on the Daytona project. Charamut estimated that, by the project’s end in mid-November, they hauled off 1,100 tons of #2 steel and 200 tons of tin. He said the importance of heading up a demolition at such a historic site was not lost on him.

“I have been going to that track since I was 16 — long before the backstretch was constructed —so it has a place in my heart. As my children and grandchildren see photos of this demo project in the future, maybe they will reflect back on it and the role we played in the speedway’s expansion. This was a great project that really showed how expertise, the right technology and teamwork — working alongside CDI — can go a long way toward ensuring a project’s success. Particularly a high-profile project like Daytona.”