The Adamo Group implodes the former home of the Atlanta Falcons, the Georgia Dome, in the span of 12 to 15 seconds 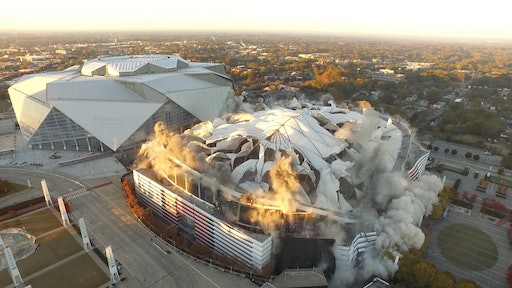 In 1996, Kerri Strug made Olympic history at the Georgia Dome by jumping a second time on an injured ankle to beat the Russians and win the first U.S. gymnastics team gold medal. Twenty-one years later, the Adamo Group needed only one shot to implode the outdated structure.

Four months later, National Demolition Association (NDA) member Adamo Group mobilized its equipment for the demolition and implosion of the structure. A new, state-of-the-art Mercedes Benz Stadium (MBS) would open later that summer, and a hotel, parking deck and tailgating space was planned for the Georgia Dome’s prime location next to the new facility.

Although there were many bidders from around the United States, the Adamo Group won the contract because of its plan to implode the structure in one implosion event. 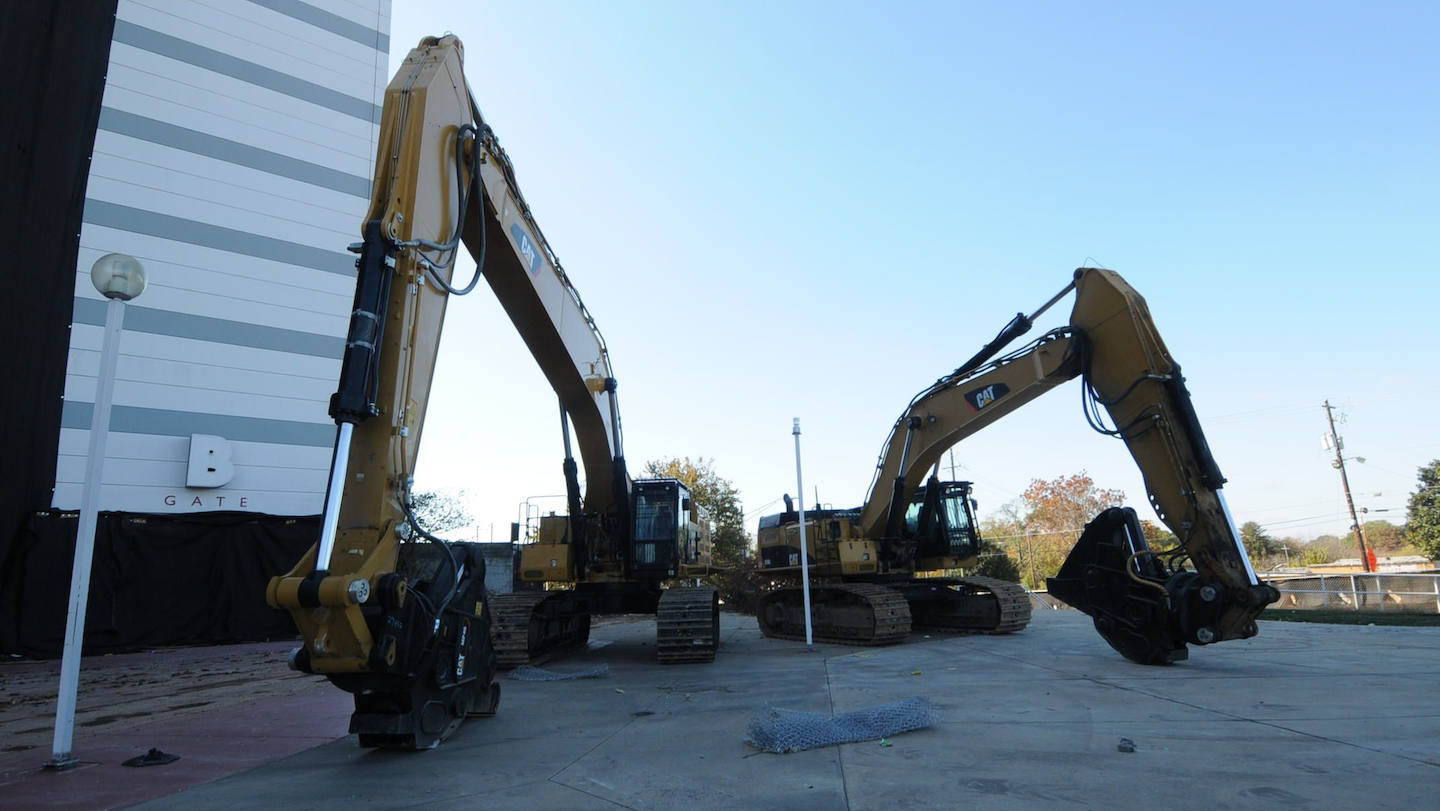 An assortment of tracked excavators with various attachments and other heavy equipment WERE used throughout the demolition process.National Demolition Association“Multiple implosion events [would have resulted] in longer schedule durations,” says Mark St. Cyr, the company’s safety manager. [The Adamo Group’s] duration was a critical item to minimize impact to the surrounding facilities. The bid contained the shortest schedule duration for the entire demolition project and was the most cost-effective.”

Much work went into the project prior to the actual implosion. First, a finite element analysis was performed by third-party engineer Thornton Tomasetti to validate the single-implosion technique. Steve Pettigrew of Pettigrew Inc. devised the “Master Plan for Implosion,” as it was called. Pettigrew was one of the Adamo Group’s subcontractors, and Steve was the one who had the initial insight for the one-shot implosion.

The review and approval of that plan took months, during which the Adamo team put detailed plans in place to make sure they could meet the demanding schedule, St. Cyr says.

Once approved, but before the actual demolition process could begin, existing facility components had to be sold. Finally, on July 10, 2017, Adamo began mobilizing its equipment fleet. A week later, demolition commenced.

The first piece of demolition activity was the decommissioning and removal of universal waste streams. This work was followed by stripping the interior down to bare concrete walls and floors. “The lower bowl of seating was the first recycling/demolition work we completed. The non-load bearing block walls followed,” St. Cyr says.

The lower bowl, as well as crushed concrete material from the block wall, was placed on the concrete floor of the playing field in an attempt to help keep vibration levels down when the heavy ring beam of the stadium would fall to the ground during the eventual implosion. The recycled concrete also aided in keeping vibration to a minimum so as not to disrupt the Metro Atlanta Rapid Transit Authority (MARTA) subway system, which was a mere 13 feet from the south façade of the Georgia Dome facility. 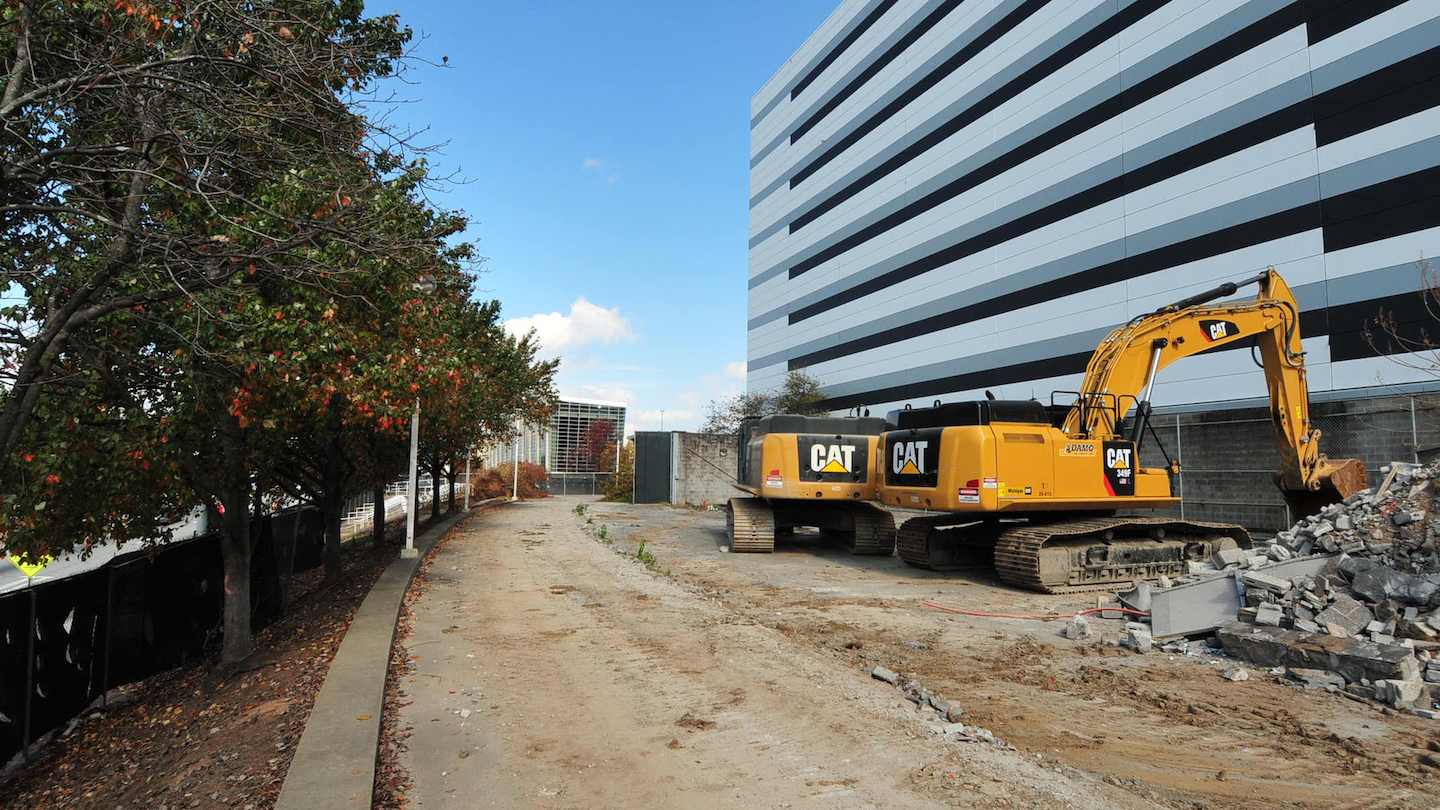 Adamo successfully recycled over 98% of the material by weight for the entire demolition project.National Demolition AssociationThe Mercedes Benz Stadium was also very close — just 84 feet from the south wall. In order to protect the new stadium, the project team of Adamo and Pettigrew designed and installed a 700-foot-long, 55-foot-high engineered wall that would withstand a three second wind gust of 60 miles per hour. The wall design, however, put limitations on the team’s selection of materials.

“The wall was designed to be constructed of wooden telephone poles with a woven geo fabric and cyclone fence covering to help stop the flying debris from making contact with the MBS north façade,” St. Cyr says. “The wall was a complete success, and we had no damages from the initial implosion on the MBS structure. There was ample force put on the engineered wall to cause two of the wooden telephone poles to shear off above the base. With the wall seeing forces of this magnitude, it is a certainty the wall protected from further damages to the MBS structure.”

Specialty drilling equipment was used on the concrete ring beam in eight separate areas to prepare for the charge placement for the implosion. These drill had to be rigged and lifted via crane to the top of the ring beam.

The implosion occurred on Nov. 20, 2017, just after 7:30 a.m. ET. It took just 12-15 seconds for the structure to fall, although small parts of it did remain upright. The total weight of explosive charges detonated on the Georgia Dome structure was sequenced over time, with over 1,000 delay periods of explosions over a 12-second duration. The first six-second series of sound is the circuit priming period, and the second six-second series is the detonation of the primary high explosives and controlled collapse phase.

Adamo successfully recycled over 98 percent of the material by weight for the entire demolition project. “This was aided by the fact we recycled nearly 100 percent by weight of the ferrous and non-ferrous materials from the project. We also recycled 240,000 tons of crushed concrete material. This crushed concrete material remains on-site as part of the new Home Depot Backyard facility backfill,” St. Cyr says. 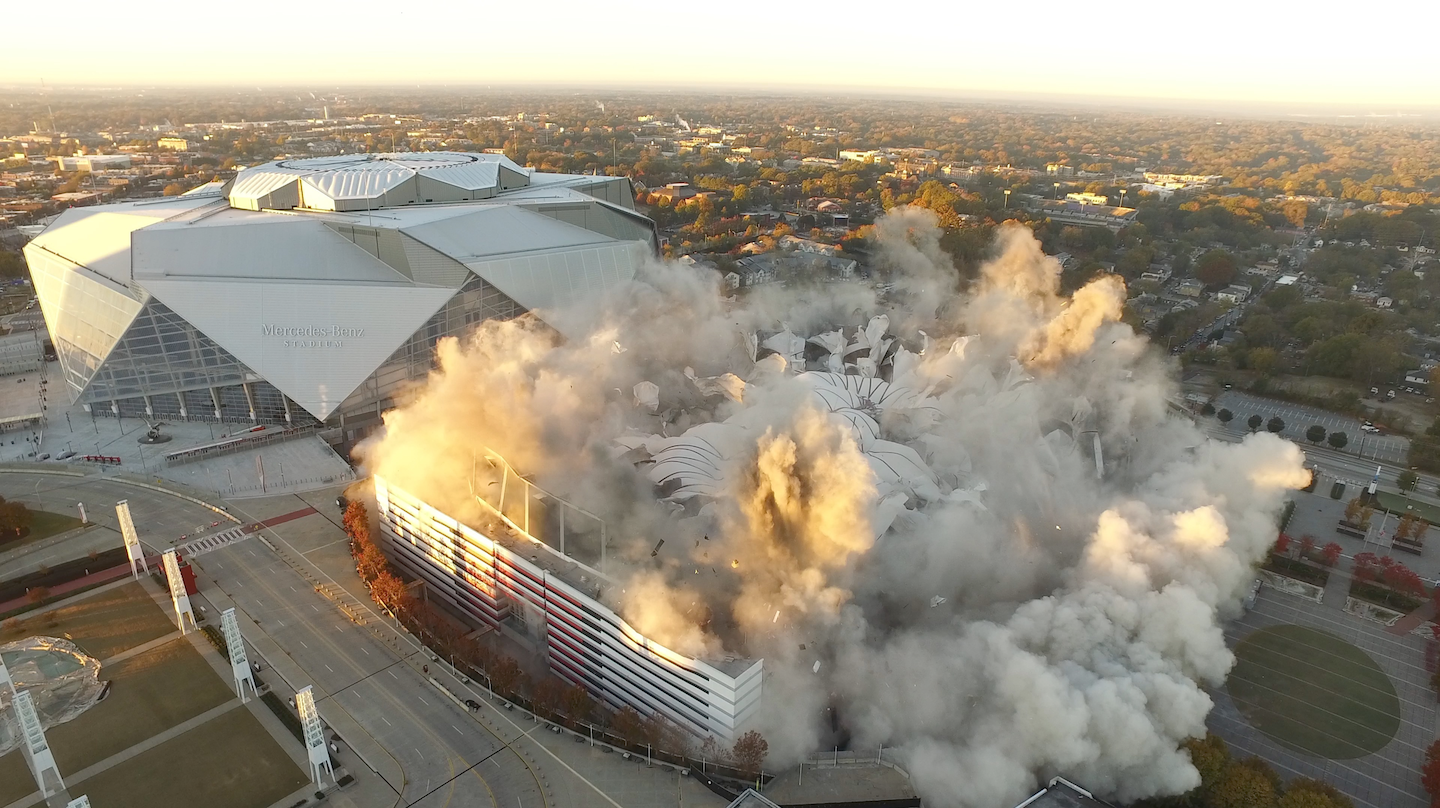 The implosion occurred on Nov. 20, 2017, and it took just 12 to 15 seconds for the structure to fall.National Demolition AssociationThere was an assortment of tracked excavators with various attachments and other heavy equipment used throughout the demolition process. They ranged in size from a CAT 312 to a CAT 390. There were also several D6 CAT bulldozers, CAT off-road trucks and other support equipment. “All this equipment was used in the support of the demolition and preparation of the concrete and steel components for recycling. At the peak we had over 40 pieces of equipment being used during each shift,” St. Cyr says.

All demolition and recycling activities were complete on Feb. 28, 2018, and was considered a success. “The project was completed with no lost-time injuries and no OSHA-recordable incidents, which was our goal coming in. We also stayed within .004 percent of the proposed budget and completed the project within the proposed time frame,” St. Cyr says.