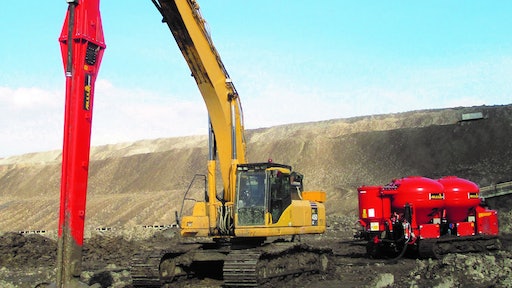 The stabilization method used on the canal includes the Processor hydraulic accessory for excavators, the PF Pressure Feeder and the Data Acquisition System to measure, control and report the stabilization.

The roughly 60-mile-long Delaware and Raritan Canal is part of the Raritan basin water supply system. It functions as a means of transporting water and acts as a reservoir, providing water to millions of central New Jersey residents. The canal itself is fed by the Delaware River and smaller streams, channels and other runoff sources. Each day, 118,877,424 gal. water is diverted from the Delaware River to the canal.

Over time, sediment from road and land runoff is deposited in the canal, decreasing its water storage capacity. Consequently, dredging is periodically required to improve water quality and restore the canal's original carrying capacity by removing accumulated sediment, aquatic vegetation growth and debris.

Three years of seasonal dredging activities are expected to be undertaken, with full completion of the project by the beginning of 2021. In total, the project calls for approximately 327,000 cu. yds. of material to be dredged from the canal. The logistics of the undertaking require year-round work and a great deal of oversight.

Site preparation for the dredging operations began in March 2018 with tree clearing and trimming at the staging area and five access areas where the dredges are placed into the canal. As part of the staging process, cranes place the dredges and floating barges with excavators into the canal. The large excavators are used ahead of the dredging operation to remove subaqueous vegetation and debris. Dredges are then used to remove the sediment from the canal.

The most time-consuming part of the work is the hydraulic dredging. It is a slow process, with only about 98 ft. of canal per day accomplished per dredge.

The dredged material is allowed to dewater for a period of time, then is mixed with Portland cement to reduce the moisture content and improve handling before it is hauled out to an offsite facility for reuse; drained water is returned to the canal following treatment.

More than 10,000 sq. ft. of soil and weathered bedrock were placed to create a shallow sloping dewatering area on the side of a hill. This included 27,000 tons of gravel for geo-textile dewatering bags, which help convey water to the settling sumps. Geotextile and HDPE liners were used to cover the entire 8-acre staging area, creating an impervious barrier to contain the water that drains from the sediment-filled bags. All the drain water from the bags is collected in dewatering sumps and treated so that the rest of the sediment can settle out in the sumps. The water is then pumped back to the canal from the sumps via a 75-hp pump and discharge pipe.

It takes four to six weeks for the sediment to dewater, after which the geotextile sediment storage bags are cut open and cement added to the sediment. An Allu soil stabilization and Processor system is used to simultaneously convey dry Portland cement from the silo and mix the cement with the sediment.

The stabilization method used on the canal is a quick, mobile and cost-effective solution for making the material dredged from the canal reusable. It includes the Processor, which is a versatile hydraulic accessory for excavators; the PF Pressure Feeder, which feeds the binder through the hose; and the Data Acquisition System (DAC) to measure, control and report the stabilization. The DAC provides control of all functions of the PF unit, plus saves the data during the stabilization project, enabling the facility to transfer data onto other computers for quality control purposes.

The main part of the system is the Processor itself. This is an attachment powered by the excavator's hydraulic system that converts the excavator into a powerful and versatile mixing tool. The mixing drums penetrate and mix a variety of material in-situ (in place), capitalizing on the excavator's mobility and articulation to reach difficult or soft areas.

In the case of the canal project, the Portland cement used as the binder is delivered directly to the area of the highest mixing shear by an attached 3-in.-diameter pipe and injected via a nozzle located between the mixing drums. The Processor penetrates hard crust layers and effectively mixes the dredged material and binder. Penetration and mixing effectiveness is enhanced by the angled position of the drums, which minimizes the “dead” area at the bottom frame.

The dredged material consists of varying mixtures of sands, gravels, silts and clays, which are ideal for reuse in a variety of applications. The added Portland cement helps dry out the material and gives the finer material more strength when used to reclaim a brownfield site.

After mixing, the sediment is loaded with excavator-mounted clamshell buckets into triaxle dump trucks for removal.

In-water work on the dredging project began in July 2018, with 76,000 tons of sediment produced during the 2018 dredging season. Hauling of amended sediment material began in December 2018 and continued through the end of March, followed by preparation for the next dredging season.

According to second quarter data from the U.S. Chamber of Commerce Commercial Construction, 88% of contractors are having difficulty finding workers forcing them to pull back on projects
June 17, 2021
Latest