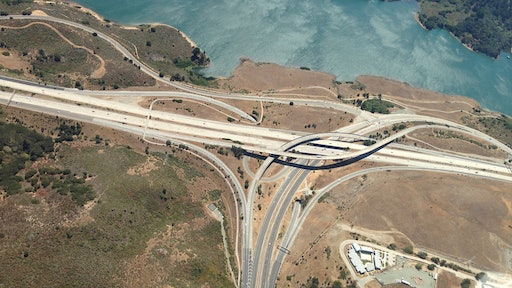 Photo by Steven Lewis on Unsplash

Amidst the Congressional battles over infrastructure funding legislation, the 48,000-mile Interstate Highway System (IHS) quietly reached a major milestone on June 29. On that date in 1956, President Dwight Eisenhower signed the Federal-Aid Road Act authorizing the system and creating the Highway Trust Fund (HTF) to finance its construction.

The IHS continues to serve as the backbone of the U.S. economy, says the American Road and Transportation Builders Association (ARTBA), noting nearly 75% of truck freight is carried along its pavements. And while the IHS accounts for just 1% of total roadway miles, it handles 26% of vehicle miles traveled.

Since its inception, the IHS helped to spawn numerous industries that have transformed the U.S. economic landscape, including lodging, fast food and restaurants, tourism and convenience stores. Each year, these sectors contribute trillions of dollars and millions of jobs to the economy.

But such areas of commerce are dependent upon a well-maintained, safe and functional interstate system. The U.S. population has doubled since 1956 and the IHS has seen the number of vehicle miles traveled skyrocket by 422%. Plus, at 65, it is well past its original projections. According to ARTBA:

"The Interstates need a shot of investment to remain healthy and vibrant for the future,”  says Dr. Alison Premo Black, ARTBA chief economist. “A renewed federal commitment to America’s transportation network is one of the best ways to preserve the Eisenhower legacy and ensure the Interstates remain the engine of economic growth for decades to come.”

Debate continues over proposed federal legislation to increase infrastructure investment, with a sizable portion set to go to roads and highways. But even if such legislation is passed, it would represent a drop in the bucket toward meeting the interstate system’s long-term needs. It will also fail to address its most pressing issue: the funding mechanisms for the HTF. The HTF has faced a long-term struggle to maintain solvency, and only regular infusions from the general fund have stemmed the bleeding.

There is little argument that the primary funding mechanism — taxes on motor fuels — is no longer sufficient. The motor fuel tax rates have failed to be increased at the federal level since 1993; vehicle miles traveled have seen slow growth; and the increasing use of electric vehicles continues to eat away at fuel tax revenues.

Congress has a history of choosing to punt the ball when it comes to addressing the challenges the HTF is facing. However, the FAST Act’s expiration at the end of September brings another opportunity to identify and implement meaningful solutions. The question is whether legislators — already months into negotiations on a larger infrastructure package — will have the stomachs to face another monumental legislative task... or choose to follow their predecessors’ lead and kick the ball downfield in hopes others will run with it in 2022 or even further down the road.

Multi-Tasker, Money-Maker: Get a Bigger Payoff from Your Next Motor Grader