Here's a look at some unique alternatives for concrete removal. 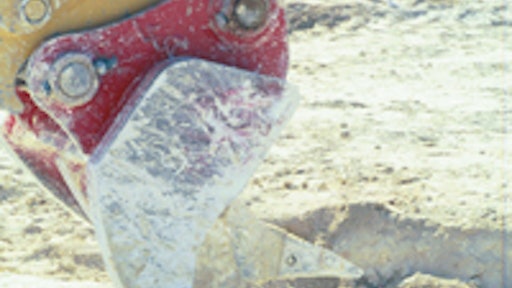 There are a lot of different attachments for breaking up concrete. A hydraulic hammer is the most common one used, and in many situations it makes the most sense. But in certain applications, there may be a better choice. Here's a look at some other attachments that can be a good option.

Contractors first used the Multi-Ripper and Multi-Ripper Bucket attachments for ripping through rock, sandstone, coral, limestone and volcanic rock, as well as frozen ground. But according to Lee Horton at Leading Edge Attachments, contractors are now finding uses for it in breaking concrete.

The Multi-Ripper features three shanks staggered forward and sideways so no two teeth align with each other, providing maximum breakout force. The distance from the excavator stick pivot to the tooth tips is also considerably shorter than a standard bucket. The result: The Multi-Ripper can break concrete four times faster than a hydraulic hammer. For added convenience, the Multi-Ripper bucket offers the ability to break concrete, then lift and load it into a truck.

"The Multi-Ripper acts like a trencher to rip the concrete into 8- to 10-in. chunks," says Horton. "Concrete is really strong in compression, but not in tension. The ripper takes advantage of this by breaking concrete in a way that it comes apart easily."

Horton recalls one utility contractor who was using the Multi-Ripper to dig trenches. "He came upon a 2-ft.-thick concrete wall and ripped through it like it was limestone," he says.

Because the Multi-Ripper is mechanical rather than hydraulic, cost is considerably less than a traditional hammer, Horton notes. For comparison he offers the following example: A Multi-Ripper for an 80,000-lb. Caterpillar 330 excavator costs about a tenth of that for a hydraulic hammer for the same size carrier, plus the hammer requires a hydraulic kit at an additional cost.

The Multi-Ripper features replaceable teeth and is manufactured from Hardox 400 steel plate for durability. It is available for use on excavators up to 220,000 lbs.

Bobcat's Drop Hammer delivers 3,600 ft.-lbs. of impact force for breaking large, flat slabs of concrete and asphalt up to 18 in. thick. "That's significantly greater than the 300- to 750-ft.-lb. ratings of a typical breaker, so it's very productive for breaking thick, horizontal surfaces," says Justin Odegaard, attachment product representative at Bobcat.

Its design is simple. Essentially, a 1,140-lb. weight inside of a tube is controlled by a hydraulic motor that lifts the chain, then allows it to freefall on its intended target. The resulting force can demolish concrete at a rate of 20 bpm. With a hit every three seconds, the operator has enough time to maneuver the machine in preparation for the subsequent blow.

"The operator can easily drive around the jobsite," says Odegaard. "He doesn't need to maneuver a breaker point and constantly turn hydraulics on and off."

While the Drop Hammer is typically used as a complement to a hydraulic hammer on the jobsite, it does offer benefits in reduced noise and stress to the carrier. "From an operator and bystander's viewpoint, there's less noise and vibrations because the ground absorbs all the energy," Odegaard points out.

Father Greg Staudinger, pastor of St. Matthew's Catholic Church in Sidney, MT, appreciates these benefits, as well as the added advantage of safety during demolition. He explains that a Drop Hammer was purchased about two years ago for maintenance of driveways, parking lots, etc., for five area parishes.

"When you raise and drop the hammer, it breaks the surface without debris flying around," he says. "Safety is a big concern for us. We've used a hydraulic hammer before, and we've broken up concrete with forks mounted to a skid loader, but this Drop Hammer does a much neater job."

That's typical, says Odegaard, since the Drop Hammer breaks from the top down through to the bottom. "For the most part, the surface is left intact, although it is fractured," he says. "The surface is relatively smooth so you can drive back and forth across it without damaging tires or tracks."

The Drop Hammer is suitable for use on skid-steer loaders, compact track loaders and all-wheel steer loaders.

Rather than demolish concrete, the Slab Crab bucket can pick up slabs of concrete from 4 to 20 in. thick and from 8 to 12 in wide, then load them into a flatbed or dump truck to haul away. The attachment features thin, tapered teeth that can slide underneath a slab without damaging the sub-base, explains Tracy Black at Kenco.

"It's a niche product and is quite a bit different than pavement buckets," he says. "A lot of other buckets are open and C-shaped. The Slab Crab is more tight-mouthed, so you can get a good lock on a slab when you're moving it. It doesn't actually grab it — when you slide it underneath the concrete and tilt it back, the weight of the slab locks it into place. It's like a cantilevered effect. You don't have to worry about it dropping or sliding out."

For Fairfield Skanska of Fisherville, VA, the Slab Crab proved to be a cost-effective means to remove the deck of the 52-year-old Southwest Virginia Memorial Bridge, which served as a link between the city of Radford and Fairlawn. The 1,500-ft.-long bridge deck was saw cut into 650 slabs, then removed with the Slab Crab. Fairfield Skanska reported it was able to cut its production time in half by using the Slab Crab bucket.

The PicBucket is a multi-functional percussion bucket that combines the power of a hydraulic hammer with the stripping strength and maneuverability of a conventional bucket, allowing you to perform demolition and debris removal with the same attachment. Flexibility and versatility are enhanced with interchangeable, rapid-action tools for more performance, power, productivity and profitability.

"We've seen contractors get two to three times greater productivity because they don't have to switch between a breaker and a bucket to perform jobs," says Yves Sicotte, PowerTech. "And with this attachment, they can rip, pry and break at different angles, which is something they can't do with a typical breaker."

Enhanced productivity is the most attractive feature for Joel McDowell, fleet planner for MCRC Fleet Services, Lansing (MI) Board of Water and Light. His initial exposure to the PicBucket was through a month-long demonstration. Operators tested the attachment on a Caterpillar 416B backhoe-loader in ground that was backfilled with concrete buried below-grade and in concrete-laden spoils piles. The final evaluation was positive, and McDowell hopes to add the PicBucket to his attachment arsenal in the future.

"For me, it's a productivity issue," he says. "When you have to drop a bucket and switch to a compactor or breaker, you're wasting time. If you have all those tasks incorporated into a bucket and all you have to do is change bits, I see it as a major labor-saving device. And even though it's more expensive than a comparable hammer, the extra cost is offset by higher productivity and less wasted motion."

McDowell also appreciates that operators can pry with the PicBucket. "That can be damaging to a regular hammer," he says. "But this unit is designed for that. The bits are remote from the hammer so the prying force doesn't damage it."

The PicBucket is available in several sizes for backhoes and excavators from 3.5 to 30 tons.

"Rubblizing" is not a term you will find in the dictionary, but Allied Construction Products coins it in reference to what its Hammerhead II concrete slab buster attachment does to a slab of concrete.

The totally self-contained hydraulic attachment delivers up to 40 bpm to demolish both horizontal and vertical concrete flatwork, such as floors, driveways, bridge decks and roadways up to 12 in. thick. An internal hydraulic cylinder and valve system compress a heavy compression spring set, which loads the system with 3,350 psi of hydraulic pressure. On the return stroke, it releases the trigger mechanism that fires the 4-in. impact bar with up to 4,000 ft.-lbs. of impact force.

"A single blow rubblizes the concrete at a 45° angle from the point of impact, reducing labor-intensive jobs to fast demolition and cleanup," says Philip Paranic, operations manager and Hammerhead II product manager at Allied. "Using a simple operation, it impacts and resets automatically. And without relying on gravity, it will fire horizontally without losing power."

With only three moving parts, the Hammerhead II offers a simple, rugged design that minimizes maintenance and repair costs. Plus, there is no nitrogen gas to check or charge.

"At about one-third the cost of a comparable hydraulic hammer, a contractor can break slab concrete faster and less expensively, which can determine whether or not he gets the job," states Al Springer, national sales manager at Allied.

Today’s fast-paced market often drives an increased need for agility. Explore key insights from the study, along with their implications.
September 15, 2020