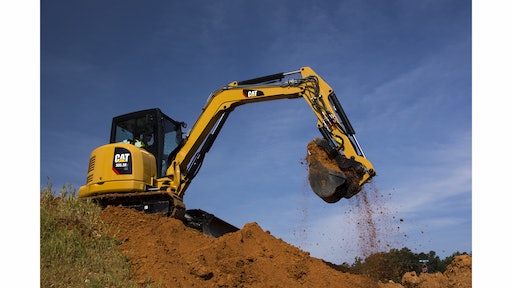 Caterpillar downsized the engine in its 3.5-tonne 303.5E2 mini excavator to 23.5 hp to cut the machine’s emissions-compliance cost, and upgraded to an electronically controlled hydraulic pump to match the higher-horsepower predecessor’s productivity.

Keeping the 303.5E2 under 25 hp avoids having to equip it with a diesel particulate filter or diesel oxidation catalyst to satisfy the U.S. EPA’s Tier 4 exhaust limits. Borrowing hydraulic technology from Cat’s F Series backhoe loaders boosts the 303.5E2’s production.

Cat’s tests comparing the 303.5E2 to its 31.6-hp 303.5E suggests the E2 produces every bit as much with a 7% fuel efficiency advantage. Cat attributes the new model's performance to what the company calls Smart Technology: sensors measuring altitude, ambient and engine temperatures, hydraulic load and air conditioning load and computers on the engine and pump that manage loads to keep the diesel engine working at peak torque.

75-hp model weighs up to 19,841 lbs., provides optimal stability and is lower to the ground for easy access
Mecalac North America
May 18, 2020

This 17 class machine extends the company's battery/electric line, joining the popular 9VXB which is already on the market
KATO-CES
April 24, 2020