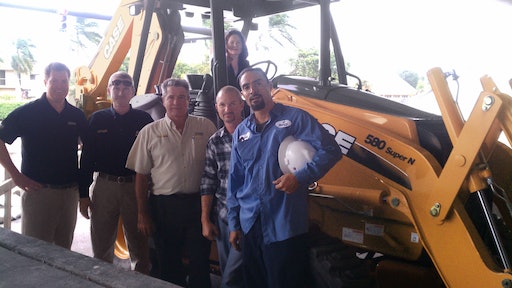 Hubbard Construction, Winter Park, FL, received the award for donating labor, materials and the use of equipment in helping build 28 “mud volleyball” courts for the 19th Annual Mudd Volleyball Challenge for the March of Dimes. The event was held in Orlando, and attracted the participation of 164 teams from all over the state of Florida. The tournament raised approximately $165,000, including matching grants, for the March of Dimes Central Florida Chapter.

Hubbard donated the use of a wheel loader, two excavators, a dump truck, water trucks and electric generators in preparing the eight-acre event site. Crews from Hubbard also set up a stage, a mobile office and a 260-foot-long tent at the site that served as hospitality headquarters for teams raising $1,500 or more. The project required a few weeks of site preparation and another week to restore the site following the event.

As grand prize winner of the Case Community Challenge, Hubbard Construction received one year’s free use of a Case 580N loader/backhoe. In addition, Case made a $5,000 cash donation to the March of Dimes.

“Case congratulates Hubbard Construction and all of the contractors who were nominated for the Case Community Challenge award,” said Jim Hasler, vice president, CNH Construction. “These contractors provide outstanding examples of community service, and they testify to the important role that the construction industry plays in every town and city throughout North America.”

“Hubbard Construction is honored to receive this award, and pleased with the recognition it brings to the annual March of Dimes Mudd Volleyball Challenge,” said Ray Birko, equipment manager. “We not only provided equipment and services to prepare and restore the event site, we also sponsored four volleyball teams in the tournament. It’s a great event for a great cause.”