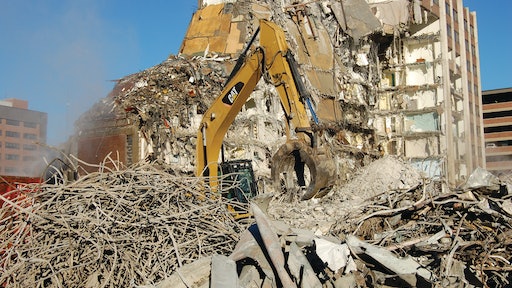 Adamo Group has begun work on contracts for the demolition of the Detroit Medical Center (DMC) Guest Services Tower and the former Riverwalk Plaza Hotel in Jackson, Mich.

The demolition of DMC’s 90,000-square-foot Guest Services building is part of the center’s expansion program. The nine-story building was constructed of heavily reinforced concrete. The penthouse and mechanical room were located on the roof.

Adamo’s scope of work involves complete demolition of the building above and below grade. The basement will be backfilled with Class II sand compacted in place. Upon completion of the demolition, Adamo will also be responsible for site grading and balancing and placement of GEO-GRID material topped with eight inches of 21AA crushed concrete. This site work will lead to the construction of a new parking garage.

The One Jackson Square Complex in downtown Jackson, Mich., is occupied by Allegiance Healthcare which includes the vacant 10-story Riverwalk Plaza Hotel, a multi-story professional office tower and a one-story medical office building which connects the two multistory buildings. The complex also sits atop a two-level underground parking facility.

This project poses some unique challenges. The underground parking, office tower and one-story medical office buildings are to remain open and active during demolition. The complex is also bordered on one side by the Grand River. In order to prevent any possible demolition debris from moving down the river, Adamo will anchor a floating boom in the river.

Upon completion of the hotel demolition, the one story medical office building that is attached to the hotel and its basement will require structural reinforcement and restoration prior to backfilling.

We understand the challenges of your jobsite. Our ADTs are designed with you in mind.
October 1, 2020
Latest