From the types of equipment used to its equipment partnerships, The Cannington Group is all about working together - and smartly. 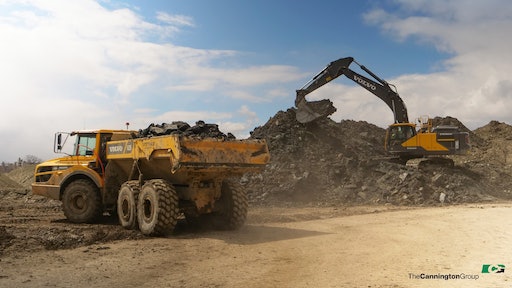 When equipment manufacturers started promoting the use of excavators and articulated haulers together as earthmoving teams, they found a firm believer in David McCrossan, president of The Cannington Group, a family-owned contracting firm in the Greater Toronto Area.

McCrossan says the combination of Volvo crawler excavators and articulated “rock” trucks sourced from Strongco is the only way to do it here. "Here" is a 75-acre parcel of prime land on the shore of Lake Ontario in the resurgent Port Credit area of Mississauga. The long-time former home of a bulk oil storage facility, the property will eventually be developed as one of the region’s prime residential communities.

As a specialist in soil remediation and other environmental applications, The Cannington Group is currently on site for 14 months in what McCrossan describes as “a surgical excavation” project. “We’re excavating, stockpiling, segregating and hauling off soils that exceed the site criteria. In some areas, we are taking 2 ft. of dirt off; in some areas, we are taking 3, 4, even 10 ft. off. The depth is all over the place,” he says. “Scrapers just wouldn’t work here with the select areas we have to excavate and the varying corresponding depths.” 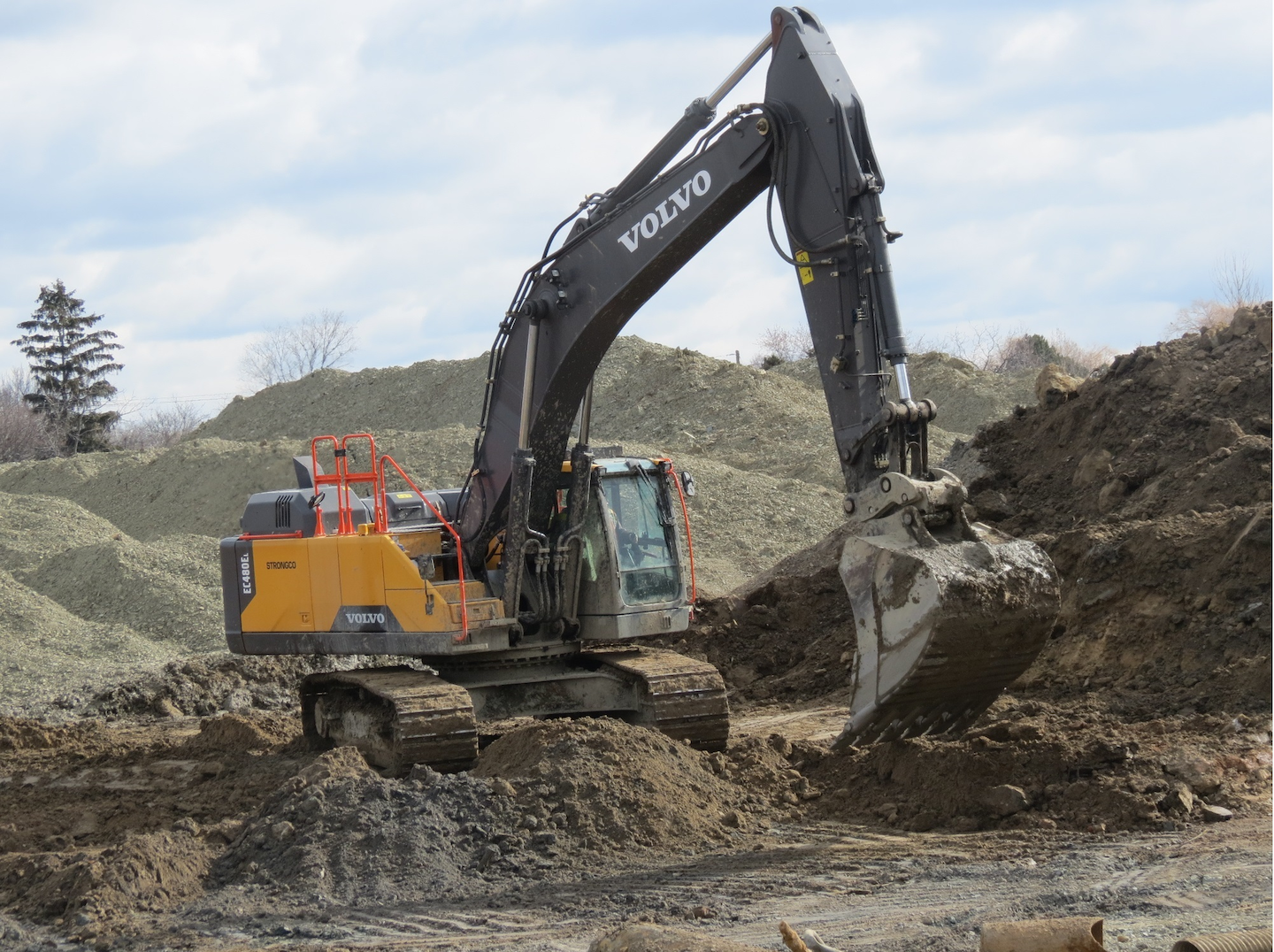 An EC480E prepares to dig surgically.“We wanted to have the biggest excavators that are going to be usable on other jobsites, as well,” explains McCrossan. As one of the larger excavators you’ll find in a relatively urban construction setting, the EC480E is "pretty well the biggest one you can float in without having to take it apart.”

It is expected the Mississauga work will wind down around Christmas of this year. “Most of the work we do will be smaller jobs after this, until we get that next big project,” says McCrossan. As such, the equipment needs to be flexible and available to be dropped off, put right to work and picked back up again every few weeks.

The choice of haulers on the site was likewise strategic, albeit for different reasons. All four of the Volvo articulated haulers are 25-ton A25G models. “We did the numbers on 30-ton rock trucks, even 40-ton rock trucks, and we found the 25s with the low ground pressure are just the ones to go here,” says McCrossan. “It’s a smallish site, there’s close dumping, so there just wasn’t any advantage in using bigger, costlier trucks that also cost more to run.”

Having owned and managed a fleet of articulated haulers when The Cannington Group previously worked as a larger sewer and water main contractor, “we’re very familiar with how to use them, and the best uses for them,” says McCrossan, “and this is the perfect application.”

Many Jobs, and Site Conditions, in One

Unlike the mass excavation of virgin or agricultural land for future development, a remediation jobsite almost becomes dozens if not hundreds of small excavations of varying widths and depths.

“There are other contractors who have priced this as a bulk excavation job, and they were actually cheaper than us,” notes McCrossan. “The client went with us because of our experience with remediation and what is basically a surgical excavation. It’s slow, it’s methodical and there is a lot of direction in field from the consultants. Gear shifting on the A25G adjusts dynamically to all operating conditions.“You can’t just haul away clean materials as impacted. It’s just too expensive," he adds.

The remediation contractor is continually dealing with different contaminants, different depths of contamination and different types of soil, along with the seasonal factors of rain, snow and frost that left the Mississauga site almost bog-like in the spring. Despite the muddy and even flooded conditions, the A25E articulated haulers were able to bear down and work their way around the site and keep the project moving.

When the environmental consultants need to do their testing at key excavation spots, the operators can move their machines elsewhere on site and continue being productive with stockpiling or other maintenance duties.

When lining up a job such as this, the remediation contractor is provided the scope of work, including depths of excavation, known locations of contamination and estimated quantities of material, McCrossan points out. “Then it’s up to us as the contractor to look at the resources we need to be able to perform the work,” he states. “With this one, we basically took their 24-month schedule and said... we can do it in 14.

“It’s 75 acres in total, but we’re working our way out of space,” he noted about 5 months in. “The more we excavate, the bigger the piles of clean material get and the less real estate we have to drive on and to stockpile on. It’s going to continuously get tighter.”

Having worked in various sectors and in varying company configurations over the years, The Cannington Group is today in the business of working equipment, not fixing equipment, McCrossan comments. That's what makes the relationship with Strongco and key account manager Daniel Hili so important to the success of the specialized contracting company.

“We do a lot of research on the equipment,” says McCrossan. “It’s my job in the company to (a) get the work, and (b) provide the guys with the right tools to get that work done. With the support of Daniel, Strongco, Volvo and Volvo Finance, I have done that. They have collectively stepped up and provided us some fantastic equipment and really, really reasonable rates. It’s a very good package.” 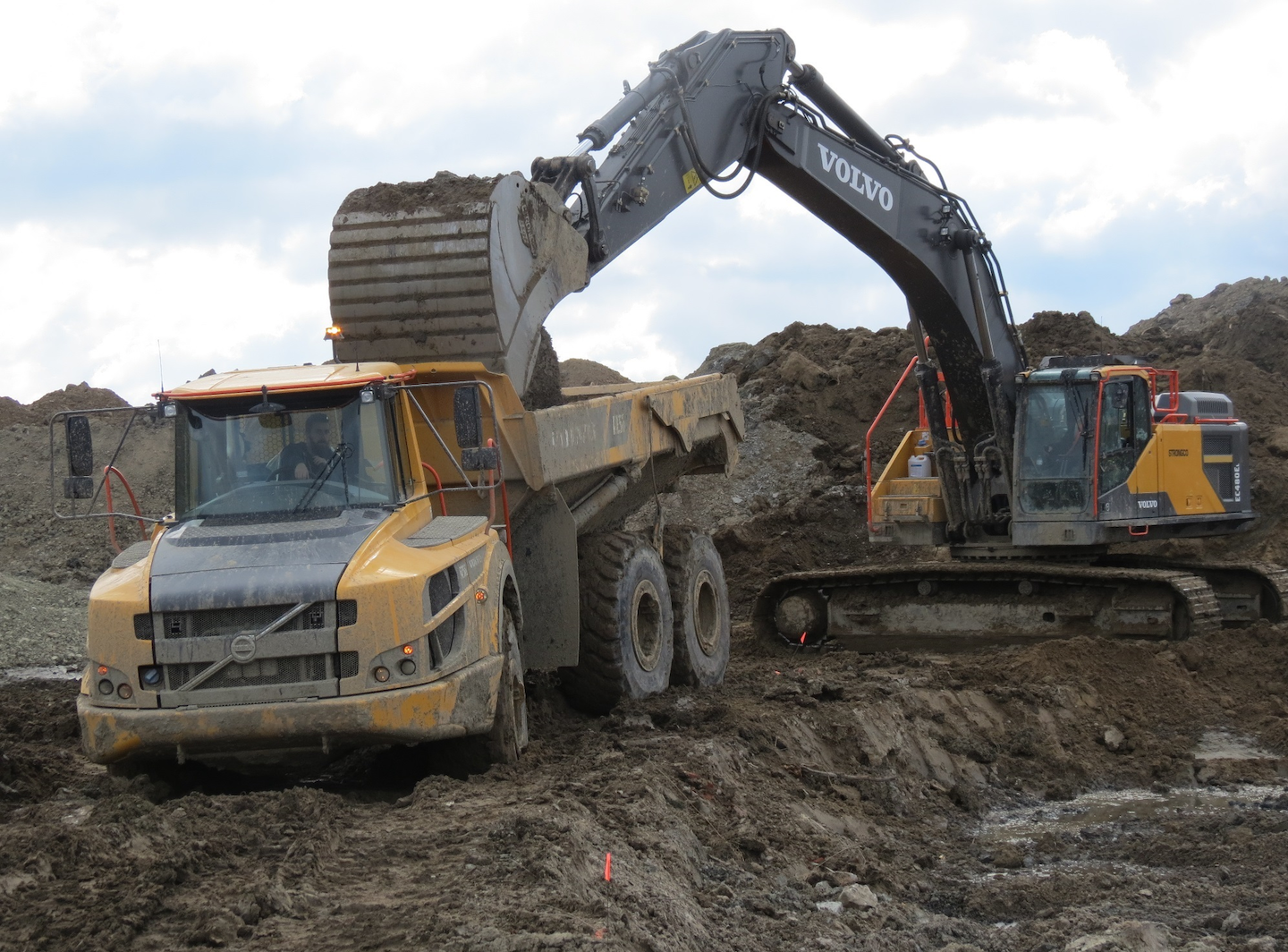 Volvo’s Comfort Cab offers ease of operation, even in diverse conditions.The Volvo excavators and articulated haulers have not only earned a collective thumbs up from his operators for their ergonomics and ease of operation, but also McCrossan’s own top grade for meeting fuel efficiency and cost of operation claims.

Some pieces in The Cannington Group’s fleet were procured specifically for the Mississauga job. “But we’ve also had long-term and multiple leases,” says McCrossan. “It’s a long-term relationship that we’re in with Strongco, and it’s going to continue.”With the support of Strongco and Volvo Construction Equipment, McCrossan is right at home doing environmental contracting.

Through its relationship with Strongco, The Cannington Group was an early adopter of Volvo’s Total Maintenance & Repair (TMR) program. According to Strongco key account manager Daniel Hili, the Mississauga project has provided “a three-way win,” particularly when teamed with the contractor’s equipment leasing package.

With the confidence of knowing their fixed costs through the TMR program, the customer can be highly productive. He or she has new equipment that is fully supported by the dealership in combination with a modern service team keeps that equipment running in top shape. This, in turn, keeps the equipment’s residual values high for the manufacturer and, thus, allows the dealership to give the customer a better deal on new replacement machines down the road.

For The Cannington Group's David McCrossan - a construction "lifer" - it’s all good. “Like I often say, I’m on the Freedom 85 program, so that gives me another 35 years to go," he notes. "I don’t think this equipment, as good as it is, will last 35 years. So, we’ll definitely be trading and getting new equipment. For sure.”