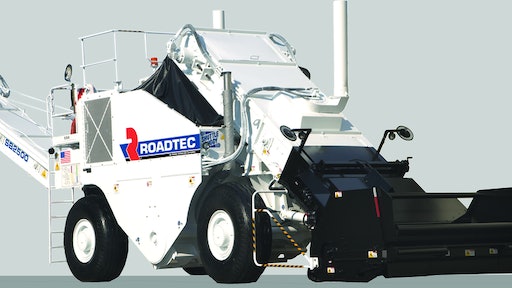 Roadtec Shuttle Buggy is now being offered in an upgraded version, the company said during a press conference at CONEXPO-CON/AGG Tuesday morning. The new generation E-series Shuttle Buggy material transfer vehicle has enhanced conveyor wear resistance, which will lower contractors' operating costs. A new adjustable width front hopper allows the E-series to work with trucks of widths commonly used in countries outside the U.S. The dual operator stations of the machine have been enhanced and can now slide sideways past the outer edge of the main frame, which improves visibility.

The mix storage functionality of the SB-2500E Shuttle Buggy MTV has been improved with the addition of bindicators, devices which show the paving crew how much mix remains in the hopper.

Pavement lifespan tests as they relate to temperature segregation during the paving process have shown that a temperature differential of less than 7° Celsius in the mat behind the paver are key to even compaction and therefore pavement durability.

Infrared imaging behind the Shuttle Buggy MTV has shown in test conducted in the U.S. as well as in Europe that the machine easily and consistently remixes to achieve temperature differential below the seven degree threshold. This proven performance has led not only to the machine's popularity all over the world but also allows contractors to earn smoothness bonus and win quality awards.