NEW PHILADELPHIA, OH - The new XL 4300 III Gradall excavator allows you to take fewer machines to the jobsite and handle more jobs. That's exactly the type of equipment you need during economic times that demand more value and versatility to sustain profitability and productivity on many different jobs.

Built for stability with front axle oscillation locks, the XL 4300 III can lift and move heavy loads off both sides as well as the front and rear of the chassis - all without the use of outriggers. This pays off by the end of the day, avoiding the time conventional excavators require to raise and lower outriggers at each high productivity work location. Transporting big loads is difficult for conventional knuckle boom models that require extra stabilization. For unusually demanding jobs on rough terrain, Gradall also offers optional outriggers as well as a blade that can be used for grading.

The stability of the XL 4300 III, which weighs about 43,000 pounds, complements the excavator's performance and versatility capabilities with the telescoping, tilting boom and a host of attachments. Because the entire boom tilts rather than only a boom-end accessory, the XL 4300 III does not lose any boom-end power on high productivity jobs requiring mass excavation, trenching, spreading rip-rap, demolition and pavement removal. The tilting boom is able to place buckets, grapples, hammers and other attachments in the exact position required and from in any direction.

A new Detroit Diesel Mercedes engine delivers full carrier speed and increased bucket breakout power that's also noticeable on many jobs. Compared with the previous XL 4300 Gradall model, the new excavator has a counterweight design that's nine inches shorter, reducing the tail swing by 12 inches - ideal for highway jobs where traffic flow must be maintained. Placing jersey barriers is more efficient because the Gradall has such a short tail swing and because it's telescoping action is smooth, with less barrier swing.

A host of standards in Gradall's new Series III cab include air conditioning, removable front window, a large adjustable seating module and a switch to select Gradall, SAE or Deere joystick patterns - a big plus when making a new operator feel at home.

Also compared with previous Gradall models in the same weight class, the maximum digging depth of the XL 4300 III is increased to 21 feet, 3 inches while the boom reach at groundline is extended to 30 feet, 4 inches.

The four-wheel-drive undercarriage has rubber tires designed for mobility on rough terrain as well as on highways where they won't damage the paved surface. Even while the machine is moving, the operator can change between standard and creeper travel mode to efficiently position the machine. Axles are equipped with internal wet-disc type service and parking brakes. 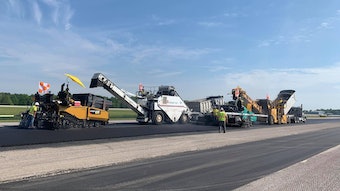