17.5-ton HMEE is capable of speeds of up to 60 mph and is equipped with blast protection systems 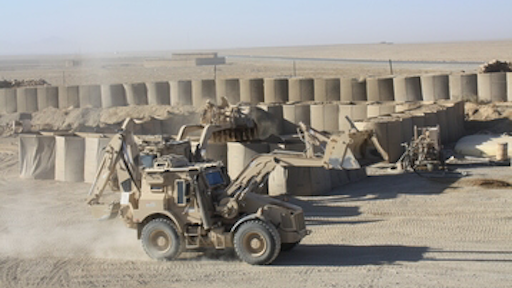 JCB has won a $50 million contract to supply high-speed backhoe loaders to the United States Army, the company announced today. The High Mobility Engineer Excavators (HMEEs) will be manufactured at JCB’s North American plant in Savannah, GA, and will be delivered by 2017.

The US Army was the first military organization to purchase HMEEs when in 2005 it awarded JCB a contract that was worth $206 million and which today remains the largest single order in JCB’s 68-year history. Since then the company has gone on to sell the machine to several other allied nations.

“Over the past 30 years, JCB has supplied armies in 57 countries with over 4,000 machines, and we are delighted to build on that success by securing this latest contract with the United States Army,” said Chief Executive Graeme Macdonald.

Engineered by a global team and produced in the USA, the 17.5-ton HMEE is capable of speeds of up to 60 mph, enabling it to keep up with military convoys on the road and eliminating the need to transport the machine using a truck and trailer. This is achieved by combining the digging and loading capabilities of the JCB backhoe-loader and the high-speed Fastrac tractor, which features full suspension and anti-lock brakes. The machine also comes with blast protection systems that on several occasions have saved the lives of operators who have encountered improvised explosive devices while on duty in conflict zones.

The machine being supplied under the new contract is the HMEE-1 model complete with new air delivery capability by C-17 aircraft. It is also air transportable in a C130 Hercules aircraft. The contract also includes the provision of training and service support. The machines supplied will be a mix of A-kit standard models and B-kit models with full crew protection.

The HMEE-1 boasts a 6.7-liter diesel engine, four-wheel drive and four-wheel steer. It can lift 2 tons and dig to a depth of approximately 13 ft.  It is offered in a base model, a full-crew protection model and a much-enhanced protection NATO Theatre Entry Standard model.

Commonality in cabs, controls, technology make it much easier for operators to adapt to wheeled or tracked excavators; electronic controls eliminate hydraulic filters and lines for easier maintenance.
Caterpillar - Cat
March 25, 2020
Follow Us