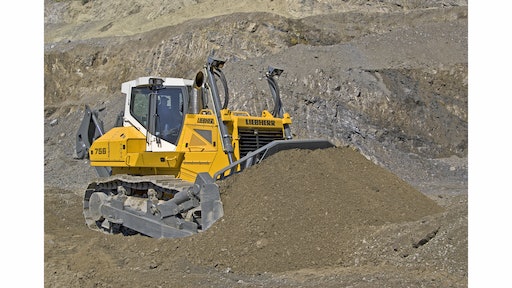 International journalists attending the Liebherr Information Tour were among the first to hear about the Earthmoving Technology Division's expanded product lineup, which will include two additions to the Generation 6 series crawler tractor line and three new telescopic handler models. The PR 746 Litronic and PR 756 Litronic crawler tractors will be available globally starting in November, while the TL 432-7, TL 436-7 and TL 441-7 telescopic handlers will initially be available in Europe with targeted global availability by 2016. The new products are being manufactured at the Liebherr-Werk Telfs GmbH facility in Telfs, Austria, which journalists toured as part of the event.

"Today, we are proud to announce the launch of our new Generation 6 dozers, the PR 746 at 185 kW and the PR 756 at 250 kW," announced Martin Langle, manager director, Liebherr-Werk Telfs GmbH. In addition to the Tier 4 Final engine, both models incorporate a series of technological innovations. "The first innovation to mention is the Liebherr Eco mode - a brand new feature of our electronically regulated travel drive. The Liebherr Eco mode allows the driver to choose between either top performance or maximum fuel economy."

The new hydrostatic drive dozers also feature a revised engine hood, large panoramic windows and a repositioned exhaust stack to ensure optimal visibility to both the blade and ripper and all around the machine. "The cab interior has also been completely redesigned," says Langle. "The operator can individually adjust the travel controls to its most ergonomic position and control the dozer by resting his hands on top of the new T-shaped joysticks. The desired travel speed range can be preselected and memorized. By limiting the maximum travel speed, the full movement of the joystick can be used for precise speed control." Other cab features include an operator presence system and touch-controlled system display.

Added Lift to the Telehandler Line

Although not yet a player in the North American market, Liebherr has been offering telescopic handlers to other regions since 2007. It offers four models in the 10- and 13m class, and is now entering the high-volume 7-meter class.

"Our engineers designed a price-competitive, all-new range of state-of-the-art telescopic handlers," says Langle. The models include the TL 432-7 with a 3.2t lifting capacity, the TL 436-7 with a 3.6t capacity and the TL 441-7 with a 4.1t capacity. All are equipped with Tier 4 Interim engines. Liebherr plans to further extend its line with new models in the 10m class in 2018.

The three new models currently available are equipped with single-lever operation of the boom and travel direction; a spacious cab with panoramic windows; very low pivot point for the boom for optimal visibility; high-performance working hydraulics; and hydrostatic travel drive.