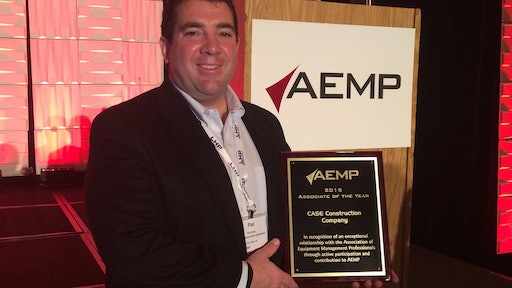 Pat Hunt, Case Construction Equipment's Director of Strategic Accounts, accepts the Associate of the Year award at the annual AEMP conference in Orlando.

Case Construction Equipment was named the 2015 Association of Equipment Management Professional’s (AEMP) Associate of the Year at the organization’s 33rd management conference and annual meeting in Orlando. The award is presented to “the associate member company, corporation or firm, which, through past efforts, has significantly enhanced or promoted AEMP’s mission and vision.”

“Case is actively involved with our membership and has placed a focus on educating equipment owners on ways to optimize equipment productivity and total cost of ownership through technology,” says Stan Orr, CAE, president and CSO of AEMP. “That, combined with its leadership on the issue of infrastructure investment through the Dire States platform, makes CASE a valuable member of AEMP and our Associate of the Year.”

“The work AEMP does for our industry in education, standardization and ethics is second-to-none,” says Jim Hasler, vice president – North America, Case Construction Equipment. “It coincides well with CASE’s efforts to provide solutions that are equally practical and profitable for the equipment owner. AEMP is invaluable to both OEMs and equipment owners, and we thank them for this recognition.”

The award coincided with Case’s participation at the AEMP conference, where the Dire States platform was featured in both the conference’s keynote address and a subsequent panel discussion on infrastructure investment.

May 16, 2014
Latest in Earthmoving Equipment