Lighten Up on Oil Grades 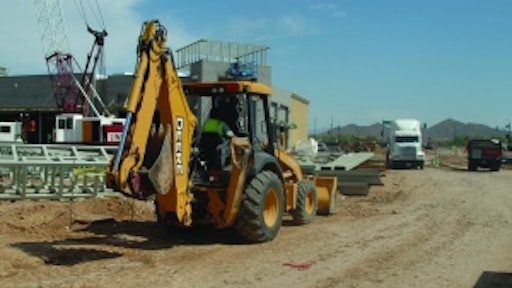 If you operate in hot climates, such as Arizona, the long-proven 15W-40 may provide the best high-temperature solution.

In North America, 15W-40 is the predominant viscosity grade for heavy-duty diesel engine oil. While other options exist, such as 5W-40 and 10W-30, many consumers are reluctant to change from the time-proven 15W-40 products. But there are compelling reasons to consider either a 5W-40 or a 10W-30, depending upon your application and climate.

Oil technology, like everything else, has progressed over the past several years. Yet, there is a reluctance to change. "The average customer has an appetite for higher viscosity," says Mark Betner, Citgo Petroleum heavy-duty lubricant product manager. "Many people have what I call 'Viscosity Fear Syndrome'. When you talk about low-viscosity oils, they envision higher cam wear, higher bearing wear. In reality, a diesel engine operates in a lubrication mode that basically maintains full film lubrication as compared to a gasoline engine. Higher viscosity oils actually result in robbing more power out of the engine."

Frictional losses in an internal combustion engine can be significant. "Up to 30% of the power that is generated by a diesel is just running itself," Betner points out. "The rest goes to mechanical work energy. When you are turning 1,600 rpm, anything that increases friction will draw more energy out of that engine."

But perceptions die hard. Betner recalls many years ago when multi-grade 15W-40 was introduced. He had a customer who stubbornly refused to switch from a straight 30-weight oil. "The customer told me to go back and tell the engineers that a 15W-40 will never work in a diesel engine. That was based on past experience, lack of information and lack of education," he says.

Customers need to feel confident before they are willing to change oil grades. "The largest obstacles are going to be acceptance, understanding and feeling comfortable with it," says Dan Arcy, OEM technical manager for Shell Lubricants. "We have all been using 15W-40 for 30 years now. Any kind of change takes time. That will slow some of the transition."

"It's a combination of education and comfort zones," agrees Betner. "The reason why 15W-40 has such a strong hold on the diesel market is that's what the engine manufacturers have primarily recommended."

Though there are a few manufacturers who do limit the viscosity to a specific grade, most manufacturers allow a range of viscosities, depending on the ambient air temperature. So, while it's vital to adhere to the manufacturer's recommendations, you almost have to look at it manufacturer by manufacturer and engine by engine to make sure a 10W-30 or 5W-40 is acceptable.

The temperature range of the climate in which you operate should play a large role in your oil selection.

If you study the viscosity charts from the manufacturers (remembering that the first number represents cold weather performance and the second represents high temperature performance), 5W-40 oils often offer the widest ambient temperature operating range, says Betner. For instance, a published Caterpillar viscosity chart rates a 15W-40 from +15° F to 122° F ambient. A 5W-40 is rated from -22° F to 122° F ambient. That gives you an additional 37° F lower ambient for cold starting.

As such, the tried and proven 15W-40 simply isn't the best solution in some cases. "A 15W-40 will not flow properly below 15° F," says Betner. "Many people don't realize it is not just the oil flowing into the rod and main bearings or creating proper film. There is also a battery and a starter. If you don't artificially heat the engine, or use outside energy to heat it, you are going to crank that engine and the battery has to supply amperage to the starter, which in turn has to convert electrical into mechanical energy."

The thicker oil is going to require the battery to deliver more amperage every time you cold crank it. "The starter is going to have to work harder," says Betner. "It is going to heat up faster. Every time you draw a battery down lower because you are requiring more from it, and every time you overheat a starter, you are going to shorten the life of those two components."

Wear and tear increases. "It is not just lubrication efficiency. It is also stress on other components, because you are asking that engine to do something that it is not real comfortable doing," Betner states.

The engine will turn over or crank with less resistance and energy output at lower temperatures with a lighter viscosity oil. "You can easily get a 15° F or even 20° F lower starting temp on a vehicle with a 10W-30 vs. a 15W-40. It gives you that added ability to start in those colder temperatures," says Arcy. "I don't see any reasons why a 10W-30 would not perform as long as it falls in the ranges that the manufacturers designed into an engine."

Likewise, higher temperatures may favor higher viscosity oils. "Most of the engine manufacturers recommend 15W-40 for higher engine temperatures -- when you are getting above 100° F," notes Arcy.

While often difficult to measure in construction applications, fuel efficiency should not be overlooked. "There is an advantage to low-viscosity technology as far as fuel economy," says Betner.

Arcy agrees, noting, "Definitely you are going to see some reduction in fuel use. The savings from engine type to engine type are probably going to vary. There is definitely going to be a savings and it comes from going with a lighter viscosity oil. It takes more [energy] to pump the more viscous oil. I don't want to say that 100% of the savings comes from that, but that is where part of it comes from."

There are too many variables in the operation of construction equipment to accurately compare fuel economy, so let's take a look at the results from tests conducted in medium-duty trucks. Shell Oil ran a test with six different oils (with different viscosity grades) and compared it to a standard -- that being a 15W-40. "In that test, we saw a 1.6% reduction in fuel consumption with our 10W-30 vs. a 15W-40," Arcy says. "With a 10W-40, we saw a .7% reduction in fuel consumption."

The grade of the oil definitely impacts fuel use. "There have been reports that a 10W-30 will produce as good or even better fuel economy than a 5W-40," says Betner. But the results are very close. "I don't think any construction company is going to prove if a 10W-30 is better than a 5W-40 as far as fuel economy."

It's important to keep any gains in perspective. "We are not talking about huge increments here," says Betner. But assume that a diesel engine consumes anywhere from 10,000 to 20,000 gal. of diesel a year. "A 1% improvement equates to 200 gal. of fuel in a 20,000-gal. burn a year. If you have a bunch of machines, that starts to add up. I would say a low-viscosity engine oil may contribute anywhere from .5% to 3%, depending upon the type of operation. That is what you are hearing reported in the industry."

One of the common misconceptions is that lighter viscosity grades do not offer the same wear protection. However, the data proves they are safe.

"We have shown with the testing we have done that the 10W-30 provided comparable wear protection as a 15W-40," says Arcy. "If formulated properly, we are seeing equivalent wear performance. That is based on our used oil analysis and field testing. We are seeing the wear metal numbers for iron, lead and such being equivalent to [those of] a 15W-40."

The data is overwhelmingly in favor of premium oils. "We do about 10,000 oil samples a month at Citgo on all makes and models of diesels, including a massive amount of off road," says Betner. "With premium oil technology, I see better wear protection, whether it is a lower viscosity or a higher viscosity. As you go up the oil scale, you can prove that the better oils will do better, especially if you are pushing oil drain intervals. You will not lose wear protection going to lower viscosity oils."

not all oils are formulated, or priced, the same, however. "If you look at the various suppliers of 5W-40s, virtually all of them are full synthetic oils," says Betner. "Per-gallon pricing is usually upwards of twice." But there are potential paybacks, such as the ability to consolidate your oil, as well as increase drain intervals.

"I have a municipality near Chicago that has everything under the sun in terms of equipment. They were using an automotive engine oil for their automotive fleet and a 15W-40 for the heavy equipment," Betner says. "When they went to a 5W-40, they were able to consolidate."

The automotive fleet is actually getting better protection in severe applications with the higher performing 5W-40 synthetic engine oil. "The heavy equipment turns over beautifully on the cold winter days on Lake Michigan, unlike the 15W-40 that would grind a lot longer," Betner asserts. "That municipality claims they are saving about $50,000 a year on fuel, consolidation and cold weather problems."

Drain intervals can often be extended with synthetics. Betner cites a quarry in Wisconsin that has significantly increased oil drain intervals safely. Oil analysis shows very low wear rates. "The quarry has also eliminated the use of ether in the wintertime, which was damaging some of the engines because the 15W-40 was making cold cranking more difficult," he states. Technicians would get impatient and overshoot the equipment with ether to get it running.

Of course, there are pricing advantages to conventional oils. Since a 10W-30 can be made with conventional base oil stocks, the price may not differ much from your current 15W-40 oils. And you still benefit from the lower viscosity. This includes better low-temperature startability and increased fuel economy.

"However, do refer to your manufacturer's recommendations," says Betner. Make sure the chosen oil is recommended for your ambient temperature conditions.

Clearly, there are still cases where the time-proven 15W-40 is the best lubrication solution. But in many cases, the new generation of oils, including 10W-30 and 5W-40, could provide additional benefits that are well worth investigating.