A successful PM program relies on monitoring a variety of inputs, including those of the operator, to establish a schedule that best meets the requirements of the conditions in which the equipment operates 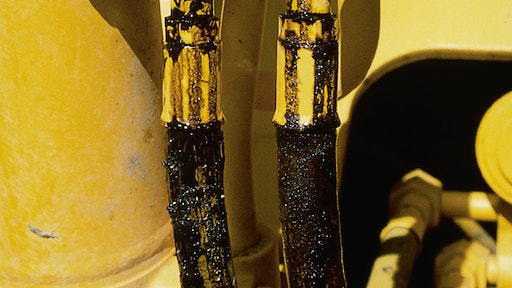 According to a study by Mobil Oil, one leak at a rate of a drop every five seconds amounts to 80 gallons of hydraulic fluid per year.

This article is Part 1 of a 2 part series

One of the most vital systems that you need to consider in extending the life of a machine is your hydraulic system. Keen attention to the maintenance of your machines maximizes their value in the event you decide to sell or trade up. Ensuring that your machine operates into this “golden period” depends upon strict adherence to a routine preventive maintenance schedule that begins before a wrench is ever picked up.

The real cost of hydraulic leaks

According to a study published by Mobil Oil’s commercial marketing department, one leak at a rate of a drop every five seconds amounts to 80 gallons of hydraulic fluid per year. That $400 may not seem significant, compared to the cost to repair, but once you factor in the estimated $7 that will need to be spent on cleanup per every dollar spent on the lost oil, you can add another $2,800 to the financial impact, for a total of $3,200 for one drop, every five seconds, from one leak point. How many leaks will you tolerate with this in mind?

Here are some other costs to consider:

One of the most vital systems that you need to consider in extending the life of a machine is your hydraulic system. In creating a maintenance plan for your fleet’s hydraulic systems, the manufacturer’s suggested service intervals are just one input that you should consider. Your original equipment manufacturer (OEM) doesn’t consider the variables of operator skill, climate, environment or a host of other conditions in the development of their preventive maintenance (PM) guidelines.

A successful PM program relies on monitoring a variety of inputs, including those of the operator, to establish a schedule that best meets the requirements of the conditions in which the equipment operates. In order to prevent failure and still obtain the maximum value from your asset, your PM should be routine and as unobtrusive as possible to the productivity of the machine.

Before discussing an approach to PM programs for hydraulic systems, maybe it’s best to take a moment to talk about what types of failures can occur. In general, failures come in three forms.

Degradation failure. This type of hydraulic system failure most often associated with machine age or use. Degradation failure is the gradual deterioration in the performance of a component caused by wear or the effect of induced contamination, resulting in the need for repair or replacement.

Transient failure. Another type of failure is referred to as transient failure. As the name suggests, symptoms of this type of failure may come and go, although generally, the consequences are much longer lived. An example of a transient failure might be particles that momentarily interfere with the function of a component. The particles lodge in a critical clearance between matching parts, only to be washed away during the next operation cycle. Presence of transient failures are often first noticed by equipment operators (“the machine felt a little hesitant”), which underscores the importance of including their input in any hydraulic PM program. Operators should be encouraged to report immediately any aberrant machine performance to their service superintendent because these failures tend to be symptomatic of larger issues.

Catastrophic failure. Failure to address transient failure issues over extended periods of time can result in catastrophic failure. This type of failure usually occurs “without warning,” though prior warnings most likely went unheeded or unreported. This type of failure is generally the most costly to repair, and costs associated with them can far exceed the time, labor and parts required.

In an ideal world, developing a PM program that addresses the causes of degradation failure would effectively mitigate the other types of failure. But this is not the reality we live in. The reality is that the equipment that you manage probably varies in age, and you may not be the first or only owner. Therefore, you don’t know how well it was maintained, or how often it was serviced. The other truth is that there are some components of a hydraulic system that just have a limited life span. These so-called “wear components” include hose assemblies, O-rings and seals.

Given these factors, a well-designed Preventive Maintenance (PM) program should align with all three potential failure types.

The Ins and Outs of Lubricant Storage and Spill Cleanup Regulations