Don't Blow it with Chipper Selection

To get the chipper you need, make sure you ask the right questions. 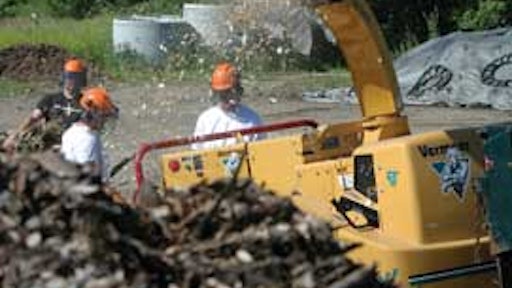 Whether you're acquiring your first chipper or are an experienced user well-versed in chipper selection, it pays to carefully consider your options and periodically reevaluate your needs to match the chipper to its intended application.

"There is a wide variety of chippers on the market — anything from small 6-in. chippers used primarily in residential applications to large 1,000-hp units that can chip large-diameter whole trees," says Dan Brandon, marketing manager at Morbark. In addition, there are several styles — disk or drum, towable or self-propelled and hydraulic or manual feed units.

To ensure a proper match to your jobsite, there are a number of questions you should discuss with your equipment dealer or manufacturer representative.

What will you do with the chips?

It makes a difference if you plan to collect the chips or blow them back onto the ground. Recycling is a growing trend. Easily more than half of all chipped product is collected and turned into a saleable item, most commonly boiler fuel or landscape mulch. "Entrepreneurs are always looking for ways to add revenue to the bottom line," Brandon says. "If they can get paid for what they create, it enhances their success."

Plus environmental regulations in many areas are clamping down on what can be brought to the landfills — many of which have stopped accepting any type of green and wood waste. Burning is also banned in a growing number of places.

"We see a lot of contractors create a product that they can turn around and market," says Brandon, noting it can be a win-win situation. "They get rid of the material that in many cases has to be removed before any building can take place, and they recycle it into a product they can sell."

A self-propelled unit can make sense in areas where chips can be blown back onto the ground, such as for highway expansion or utility line maintenance.

If you plan to collect the chips, a towable unit is a good choice. In this case, look for a chipper with a good chip throw, advises Kevin Covert, sales and marketing manager at Rayco Mfg. "If you're using a big chip trailer, you'll want a chipper with enough throw to get the chips way to the back," he says. The technology to accomplish this is a combination of the pockets behind the knives (for drum chippers) and the air flow from the fan or disk.

What terrain will you be working in?

Self-propelled chippers fill a niche if you are traveling to and around hard-to-reach areas where it's difficult to maneuver multiple pieces of equipment. Because these units are typically self-sufficient — equipped with a cab and a self-loader — they eliminate the need for a support system of skidders or forwarders typically required to bring material to a trailer-mounted unit. Mounted on tracks, these machines can further enhance maneuverability in difficult jobsite conditions.

"These are a great choice for places where it's difficult to get a chipper into and where you don't need to haul material out," says Jerry Morey, president of Bandit Industries. He identifies such examples as lot clearing in hills or rolling terrain, utility line maintenance or highway expansion. "In the long run, this setup can be less expensive because you don't have the added expense of getting the material out. The machine moves to the tree and chips right where it is felled."

What material will you be chipping?

A drum chipper readily accepts stringy material such as pine trees and vines. This is largely because of the location of the cutting tool.

The drum is positioned at 90°, typically with two feed wheels in front of it. "There is no dead space in between these components," Covert explains. "The brush goes through the feed wheels and directly into the drum."

With a disk chipper, the cutting tool is typically positioned at about a 45° angle. "That means at one end there's hardly any dead space, but at the other end there can be as much as 8 to 10 in. between the feed wheel and disk," says Covert. "A disk chipper can accept all types of wood, but it just doesn't do as well with the stringy material."

A lot of land-clearing contractors also prefer a drum chipper because it's highly productive and doesn't require additional time to cut branches and trim trees, he adds.

What size trees will you be chipping?

Undersizing a chipper is one of the most common mistakes contractors make. "Think about the average size of the material you'll be processing, and don't max out the chipper," says Brandon. "If you typically chip 12-in.-diameter wood, you'll want to step up to a 15- or 18-in. chipper because you don't want to feed it at maximum capacity all day long."

Where will the chipper be used?

If you're working in a developed area with residential homes or commercial businesses, consider the noise level of the unit, advises Chris Nichols, Vermeer. "Some manufacturers have features designed into their machines that can help reduce the sound power level, or noise level, at the operator's station and to bystanders," he says.

Chipper injuries can easily occur if the machine is not operated properly. Every manufacturer incorporates some type of in-feed safety device such as a panic bar, last-chance cord, bottom feed stop bar, etc.

"It's important to understand how to use them and why they are included on the machine," says Nichols. "Take the time to form an opinion on what safety device makes the most sense to you and which one you feel could be the most benefit to your employees on the jobsite. Consider which one has the best chance of working in your situation to reduce the risk of injury."

How much automation do you want?

The most common type of chippers are those with hydraulic feeds. This means they have some sort of feed rollers that pull material into the cutting mechanism and automatically stop feeding the material when the engine slows down to a low rpm.

"Basically, it's an electronic rpm system that monitors feed intake," says Nichols. "When the rpms drop to a certain level, it will stop the feed system so the engine can recover back to its power peak before it starts feeding again. It prevents the chipper from plugging and the engine from stalling. With this type of system, we're trying to utilize the chipper horsepower to its maximum efficiency."

How long will you finance the unit?

If you finance a chipper for five years but buy a lower grade chipper, within three years its best days may be behind it, says Covert. "Don't always buy the cheapest chipper," he emphasizes. "Brush chippers eat wood all day long. If you save a few pennies and get a chipper that isn't big enough or heavy enough for the job, you can ruin it within two years."

What support system do you need?

Do you have trucks and personnel capable of running a machine of a certain size? And are your employees capable of working safely around the machine?

"There is a tremendous amount of support equipment needed to run a chipper, especially with whole-tree towable units," says Morey. "You'll need feller bunchers to cut and pile material, as well as skidding and forwarding machines. A lot of times you'll have double the cost of the chipper invested in auxiliary equipment that support it. If you buy a chipper that doesn't fit the overall scheme of what you're doing, you won't be as productive."

In the end, your best bet is to demo any chipper you're considering purchasing. "Evaluate what you'll be doing with the machine," says Morey. "Sometimes you think you'll need a certain type of chipper, but when you get it on the jobsite, you can determine if it is the right choice."