Entries into the Holding Strong Vice Story Contest are due September 14, 2012. 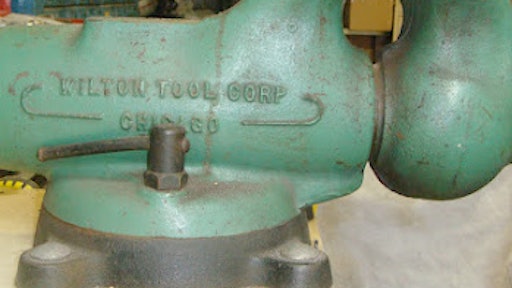 Paul M. from Canton, Ohio, found his vice, nicknamed "Old Iron," used in the 1970s. He has been using it ever since.

There are a lot of stories out there because Wilton has held strong on two main principles: staying true to their Made in USA heritage and manufacturing only the most durable workholding products on the market. This has been a fundamental philosophy of the brand since 1941, when Wilton invented the first 40S Machinist vise.

“Our trademarked vise design has proven over the decades to be the most durable on the market,” said Henry Kao, Wilton’s Product Manager. “Take our innovation and couple it with over 70 years of quality manufacturing experience in the USA, and it is no wonder that we have been holding strong since 1941.”

Wilton vises have been known to be passed down generation after generation. In celebration of its USA heritage this year, Wilton is looking for the best Wilton vise stories and pictures.

Take Paul M. from Canton, Ohio, who acquired his Wilton vise as a youngster. It came from an employer that used hundreds of vises in its contract work. One day he was directed to a shelf loaded with vises and was told to pick one out to use in his garage. After his initial search he didn’t find what he wanted until he looked under a greasy rag and discovered “Old Iron.” “Believe me, she has served me well in the last 40 years.”

John H. of Kennesaw, Ga., uses his Wilton 9C vise every day in his gunsmithing business. He scavenged it in the late 1970s from the rear bumper of a service truck used by heavy equipment mechanics. “I wouldn’t be surprised if it isn’t 50 years old by now. Those truck bodies were recycled over and over before they were retired. It still works great today!”

Vises have played an essential role in American manufacturing. Tell a story about your Wilton vise and include a picture of it to be eligible for the contest. Entrants may sign up online at the Holding Strong Vice Story Contest entry page.

The winner of the best Wilton vise story and image will receive $5,000 worth of Wilton merchandise. All qualified entrants will receive a free Wilton Made in America
C-clamp ($84 value). Entrants must be age 21 or older to enter and no purchase is necessary. The sweepstakes closes, September 14, 2012.

The Wilton Holding Strong Vise Story Contest commemorates Wilton’s 71st anniversary in business. The Holding Strong contest also is an element of the American Muscle Sweepstakes. One lucky winner will drive home in a brand new 6.2L, V8, 426 HP, Imperial Blue, Chevy Camaro SS coupe. Entrants must be 21 or older, and no purchase is necessary. The sweepstakes closes September 14, 2012, and the winner will be notified by September 30, 2012.