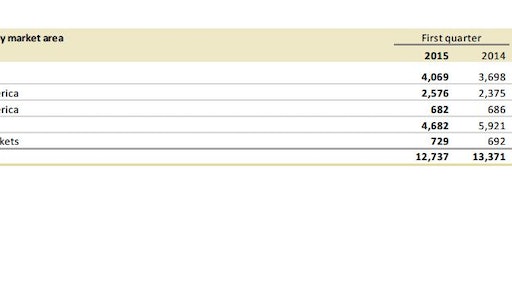 Volvo’s construction-equipment sales fell 21% to about $545 million in Asia, where Volvo CE made nearly 37% of its sales volume. CE sales were up 10% Europe which made up nearly 32% of Volvo CE’s Q1 sales. Equipment sales grew 8% in North America, where the Volvo division earned more than 20% of its sales.

“I am particularly satisfied that we in several areas of the Group have been able to improve margins, despite a negative market mix with significantly lower volumes in Brazil for trucks and in China for construction equipment,” said Jan Gurander, acting president and CEO of the truck and construction-equipment company. “If we exclude restructuring charges and the effect of the sale of shares in Eicher Motors, the Group’s operating margin rose from 3.9% in the first quarter of 2014 to 6.1%, which is an improvement of the operating income by 78% to SEK 4.6 billion.”

“The strong increase is mainly due to a considerable improvement in profitability in North America, positive effects of the efficiency program and favorable exchange rates,” said Gurander.

“Unfortunately, weak demand continued for Volvo CE,” Gurander continued. “In particular, sales were impacted by the continued downturn in the important Chinese market, which was down by half compared with the year-earlier period. In total, the number of equipment deliveries declined by more than 30% during the quarter.”

“2015 is the year in which we will see the combined effects of the product launches carried out in 2013 and the cost reductions that were implemented in 2014,” said Gurander. “Even if we still have many activities to implement also in 2015, the earnings improvement we saw in this quarter shows that we have taken another step in improving the profitability of the Group.”