The Kobelco conventional excavator is available in eight models, with operating weights that range from 32,800 – 185,700 lbs. 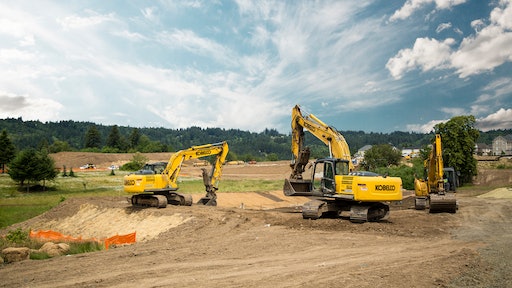 The Kobelco conventional excavators were designed to establish new standards in value, productivity and durability. They are available in eight models, with operating weights that range from 32,800 – 185,700 lb.

Much of that boost in efficiency comes from a new hydraulic regeneration mechanism in the arm that recycles energy from lowering the boom into force that can push the arm out. Other new features on the Generation 10 models include:

The pioneering spirit of Kobelco is best seen in this class of excavators. They were the first and are one of very few manufacturers today to offer straight travel, which allows the excavator to lift the rated lift chart while walking. Independent travel is a Kobelco exclusive. This feature enhances both productivity and safety by allowing the machine to smoothly walk and lift with no travel speed change. The company was also the first to introduce automatic swing priority, where one pump automatically assists the arm and the swing during combined side wall trenching.