Biden has said a gas tax increase would pay for only a fraction of the investment the country needs and that the hike would go against his promise not to raise taxes for people making under $400,000 to pay for this plan 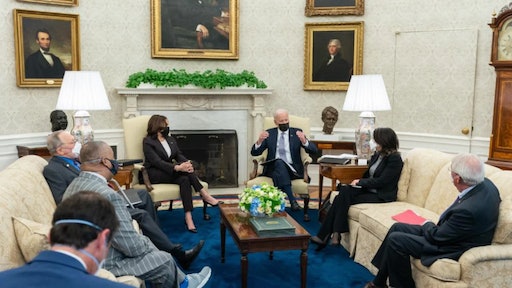 Biden meets with a bipartisan group of lawmakers to discuss the American Jobs Plan.
POTUS Twitter

President Joe Biden met with a bipartisan group of lawmakers Monday to discuss his $2.2 trillion infrastructure proposal and how to fund it. In the meeting, Biden vowed that the size and scope of his American Jobs Plan — as well as how to pay for it — is up for negotiation.

For Democrats, infrastructure funding means finding ways to combat climate change and build resilient structures using green initiatives. The second part of the proposal is set to address economic inequities, provide paid leave to workers and support child care. The administration’s accompanying Made in America Tax Plan proposes to increase the corporate rate from 21 percent to 28 percent to pay for it all.

Republicans know that this type of pay-for is dangerous for the economy and are skeptical of the laundry list of items touted as "infrastructure" in the Biden plan.

Sen. Roger Wicker (R-MS) attended the meeting and confirmed he and other Republicans wanted to stick with what they have described as traditional infrastructure — such as ports, rails and roads — and also noted there is $40 billion in unspent federal dollars to upgrade the nation’s broadband system.

Rep. Don Young (R-AK) also attended the meeting. Young is the currently the longest-serving member of the House and agreed that lawmakers have to be cognizant about the “very definition of infrastructure,” adding that he told Biden the White House should reconsider implementing an increase in the gasoline tax.

No Gas Tax as Pay-For

A gas tax increase would provide immediate and sustainable revenue for this bill and lack of sustainable funding has thwarted highway bills for decades.

Congress approved the last five-year funding bill in December 2015 with a variety of onetime funding mechanisms rather than a long-term solution like raising the gas tax. Congress has not boosted the 18.4-cents-per-gallon federal gasoline tax since 1993. That tax is now worth just 10.2 cents after adjusting for inflation.

Every couple of years, somebody suggests raising it — former President Donald Trump reportedly endorsed a 25-cent hike carried out over annual five-cent increases back in 2018. But it didn’t happen then, and it seems it won’t happen now. Probably not tomorrow, either.

During the bipartisan meeting on infrastructure, there are reports that Biden raised the prospect of a gas tax hike but was quick to point out it would not raise a lot of money and that hike would go against his promise not to raise taxes for people making under $400,000 to pay for this plan.

“Now, fundamentally, he [Biden] does not believe that paying for this historic investment in rebuilding our nation’s infrastructure and creating millions of jobs should be on the backs of Americans,” White House press secretary Jen Psaki said. “He’s proposed his own means of paying for it, but he was using it as an example of how it wouldn’t even make a sizable dent in paying for the package."

Unlike a corporate tax increase like Biden is suggesting as a pay-for, experts say a higher gasoline tax could disproportionately hurt working and lower-income Americans. It would impact those who have to drive to and for work and apply equally to lower- and higher-income drivers.

Many industry groups have strongly opposed the tax rate increases included in the plan but are happy to support a gas tax increase.

In 2018, the U.S. Chamber of Commerce proposed phasing in a 25-cent-a-gallon increase in the gas tax over five years to generate nearly $400 billion over a decade.

Biden knows time is ticking. The currently funding is set to expire September 30th of this year and Congress will need to act. Stay tuned to ForConstructionPros.com as negations continue and plans are unveiled.