Contract hasn't been finalized, but Mortenson Construction is reportedly partnering with McCarthy Building Cos. Inc. as general contractor for the new Las Vegas NFL stadium 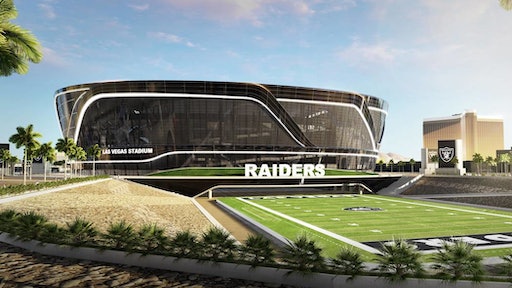 A contract hasn't been finalized but it's reported that Mortenson Construction and McCarthy Building Cos. Inc. will partner as the general contractor for the new Las Vegas NFL stadium.
Las Vegas Review-Journal

A contract has not been finalized yet, but the Oakland Raiders are reportedly close to announcing the selection of a general contractor for the new Las Vegas Raiders stadium. It is reported the Minneapolis-based Mortenson Construction will partner with McCarthy Building Cos. Inc.

“We’re working with a firm called Mortenson, and they have a local partnership with McCarthy,” Raiders President Marc Badain said. “Until the ink is dry on the contract, it’s sort of as if when you sign a player, we wait until they’ve actually signed it before announcing it. We’re working on finalizing that, but they’ve been our partner for awhile now, they’ve done a spectacular job for us and we’re very confident in them.”

(more on the general contractor selection for the Las Vegas stadium...)
Related

May 9th, 2017
Latest in Construction News

The bill is aimed at reducing crashes involving distracted drivers and preventing roadside deaths through the use of technology and increased public awareness
Jessica Lombardo
Apr 30th, 2021

There's a lot riding on racetracks. Technology helps ensure the surface is up to the demand while improving safety, rideability and competitiveness, leading to a better experience for all involved.
Larry Trojak
Apr 28th, 2021

This infographic shows a spending comparison between the $568 billion Republican proposal and Biden's more expansive one, which includes funds for schools and eldercare.
Jessica Lombardo
Apr 26th, 2021

During National Work Zone Awareness Week, and always, we need to remember there are fathers, mothers, sisters, brothers, best friends and children behind each orange barrel we pass on the roadway. Pay Attention. Slow Down. Move Over. Safe a Life.
Jessica Lombardo
Apr 26th, 2021

The impact of COVID-19 cannot be understated. In a year full of challenges, Wirtgen America saw opportunity to grow and made it a priority to remain close to their customers.
Jessica Lombardo
Apr 22nd, 2021

Programs all over the country are working to fill the pipeline of workers starting with high school. Here's why Ocean County Vocational Technical School amped up their program for these in-demand careers.
Jessica Lombardo
Apr 20th, 2021
Asphalt

Employers should remain cautious as employees return to workplaces as there might be new risks and employment litigation on the horizon.
Dormie Roberts
Apr 15th, 2021

AEM’s “Rebuild With Purpose: An Affirmative Vision for 21st Century American Infrastructure" offers an optimistic vision for how to build a modern, sustainable and equitable infrastructure for all Americans.
Association of Equipment Manufacturers (AEM)
Apr 15th, 2021

NWZAW is set for April 26-30 and your company should plan to participate and raise awareness of how we can keep our workers safe while on the job
Jessica Lombardo
Apr 15th, 2021

Biden has said a gas tax increase would pay for only a fraction of the investment the country needs and that the hike would go against his promise not to raise taxes for people making under $400,000 to pay for this plan
Jessica Lombardo
Apr 14th, 2021

Under the president’s budget blueprint, the U.S. Department of Transportation would receive an increase in discretionary funding, as well as an updated strategy for addressing concerns linked to climate change.
Jessica Lombardo
Apr 13th, 2021

Past practices of highway trust fund bailouts and an overly broad federal gas tax won't be a good match for what is already under-funded highway infrastructure the coalition says
Jessica Lombardo
Apr 7th, 2021

We're giving away one Yeti can coozie each week live during Hops & Highways, enter here and watch to see if you're a winner!
Jessica Lombardo
Apr 7th, 2021

Senate parliamentarian has advised that a revised budget resolution can include reconciliation instructions, opening a path for Democrats to pass spending legislation, like an infrastructure bill with no Republican support, by a simple majority vote.
Jessica Lombardo
Apr 6th, 2021

The company is focusing on expanding its direct sales coverage worldwide to better serve its customers.
Road Widener LLC
Apr 6th, 2021
Follow Us