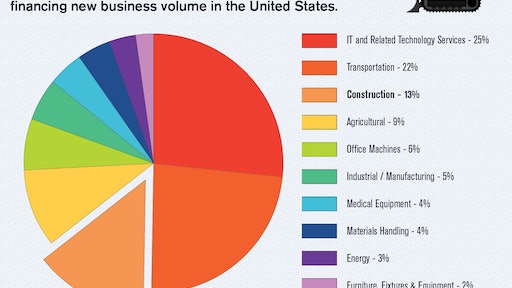 New business volume grew 6.9% in the equipment finance industry in 2017, according to the 2018 Survey of Equipment Finance Activity (SEFA) released today by the Equipment Leasing and Finance Association (ELFA). The rise in new business volume marked the eighth consecutive year that businesses increased their spending on capital equipment. The SEFA report covers key statistical, financial and operations information for the $1 trillion equipment finance industry, based on a comprehensive survey of 114 ELFA member companies. The report is available at www.elfaonline.org/SEFA.

ELFA also released a companion report to the 2018 SEFA called the 2018 Small-Ticket Survey of Equipment Finance Activity. The report, which focuses on small-ticket and micro-ticket equipment transactions among the SEFA respondents, found that new business volume in the small-ticket space grew by 3.6% in 2017.

ELFA President and CEO Ralph Petta said, “The equipment finance industry continues to grow and prosper, as evidenced by this latest edition of ELFA’s Survey of Equipment Finance Activity. The association Board and staff are grateful to ELFA member respondents, without whom this leading industry data source would not be possible.”

PricewaterhouseCoopers LLP administered the 2018 SEFA. The results were compiled from surveys sent to 375 eligible ELFA member companies in the first quarter of 2018. A total of 114 companies submitted 2017 U.S. domestic lease and loan data.

In conjunction with the SEFA report, ELFA has issued its "2018 Fact Sheet: Equipment Finance in the Construction Industry." The fact sheet and related infographic are available at http://equipmentfinanceadvantage.org/abt/facts.cfm.